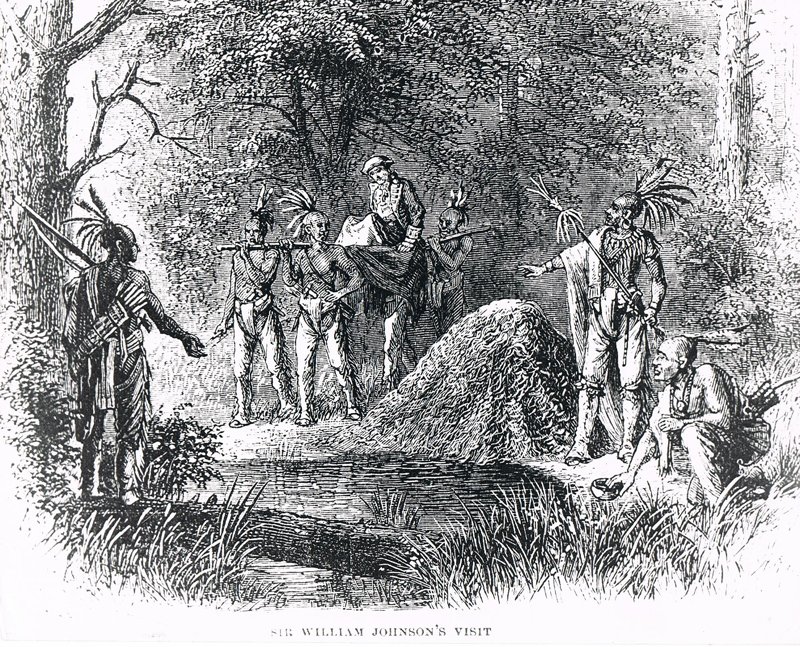 The Mohawk were the indigenous tribe of Native Americans for hundreds of years in the area of today’s Saratoga Springs. They spent summers fishing. hunting and growing crops to provide a food supply to get their tribe through the harsh winters of upstate New York. While in the area they discovered the natural mineral springs, used them extensively and guarded their location.

Sir William Johnson is thought to be the first European to visit the High Rock spring in 1771, when in poor health, was brought to the spring for a four-day visit. Johnson was the Superintendent for Indian Affairs in North America for the British Crown. Sir William lived among the Mohawk and had even married the chief’s sister, Molly Brant. Because of this strong bond with the tribe, when Johnson showed signs of declining health the Mohawk carried him on a litter to reveal the location of their deeply guarded secret spring at High Rock. After a brief four-day stay he found bathing and drinking the water made for a positive change in his health, as he was able to walk most of the way back to his home in the Mohawk Valley.  After his visit, Sir William sent letters to many friends describing the healing effects of the waters and soon settlers demanded access to this guarded location. Soon a deal was brokered with the Mohawk and the area was opened for settlement by Europeans.

After a few early short-term settlers, Alexander Bryan became the village’s first permanent settler when he began operating a tavern and boarding house in the High Rock area near what today is the Olde Bryan Inn. The area around the High Rock and Alexander Bryan’s Tavern saw the construction of the first cluster of structures built in the early village and was known as the Upper Village. Soon another area began to develop a short distant to the south in the area near the present-day Congress Spring. In 1802 Gideon Putnam and his wife Doanda, constructed and operated the first hotel in the village on the northwest corner of Broadway and Congress Street. This new area became known as the Lower Village. Soon Saratoga Springs began to grow, and the two villages grew into one Saratoga Springs.

As Saratoga Springs flourished in the 1800’s the number of mineral springs grew from four that were original and naturally occurring, to 203 mostly drilled springs. By 1908, overuse of most of the many springs by mechanical pumping left the High Rock Spring dry. The High Rock Spring had stopped flowing and the founding spot of the village would stay dry until it was re-drilled in 2015.

In celebration of the centennial of the village becoming a city in 1915, a committee worked to re-drill and bring back to life the very important High Rock Spring. Two big players helped to complete the project. First was the very talented well drillers of Hawk Drilling who donated many hours of labor and materials to reach water at 442 feet below the surface. Then the talents of the Saratoga Springs Department of Public Works under the direction of Commissioner Skip Scirocco provided the site work and plumbing for the new fountain. This allowed the water to exit the ground in two spots, the fountain and the original mineral “cone” that had provided water for use for hundreds of years.

This summer, plan to visit the High Rock Spring to further learn about the early history of Saratoga Springs as well as to enjoy the water from that spring and nearby springs Peerless and Governor. Our city slogan has it right when it states; “Health, History and Horses.”  It all began with Health and the mineral springs, especially the High Rock.