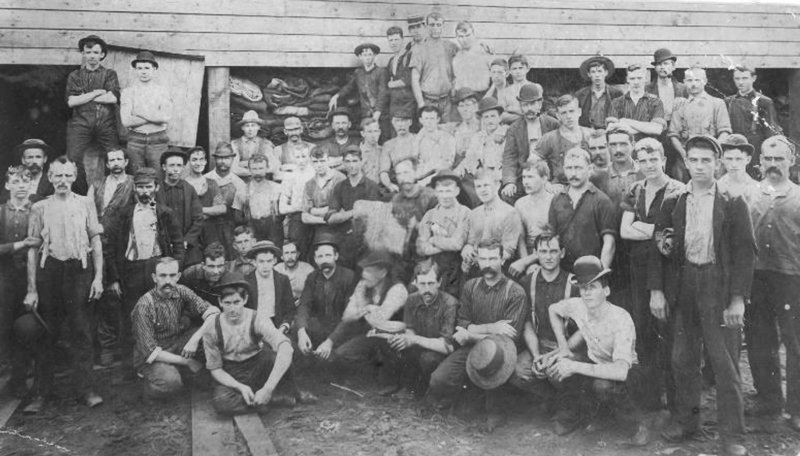 Today the crossing of Middle Line Road and Geyser Road contains a few houses and a small parking lot to access the Kayaderosseras Creek. But in the mid-1800s, it was the site of a thriving hamlet of several hundred inhabitants called Milton Center. Locally renowned Revolutionary War Lt. Colonel James Gordon became an early entrepreneur after the war. He built one of Milton’s earliest gristmills on the creek by 1800 as well as other small mills to the south in the Town of Ballston.

Attracted by the water privileges of the Kayaderosseras at that point, Milton Center grew to a sizable settlement. Within a few decades it even had its own post office, sawmill, stores, a hotel, and a Mission Chapel of Christ Church. Seth Rugg established the Rugg Spinning Wheel Factory around 1830. It reportedly supplied all of the spinning wheels for the northeastern part of the country. Rugg’s nephew David Stenner established a small tannery nearby.

A man named Samuel Haight arrived on the scene and would go on to have a dramatic impact on local area history. Haight was born in Troy, NY on October 22, 1832. After receiving a good education, he joined his father’s tannery business in Troy. In 1858 he married Helen Vassar (“a young lady of brilliant attainments”) of the famous family of Poughkeepsie which founded Vassar College.

Approaching the age of 40, he decided to strike out on his own and relocated to Saratoga County in 1870, assuming ownership of the former Rugg tannery from John Jacobs in Milton Center. Before long, Haight had greatly expanded operations by adding new buildings and using modern processing techniques. The main building was 50 feet long and 100 feet wide, consisting of a multitude of subsections and additions. The bark mill, boilers, engine, etc. were in the center, the tannery vats were to the west, the currying shops were in the rear, and the finishing department was in the east end and on the second floor.

The well-kept property was described by the Ballston Journal as containing large buildings “two stories in height with basement, and are in good repair throughout, their exterior neatly painted, thereby giving the appearance of a first-class situation, as indeed it is. It is the largest manufactory of the kind in the country.” At its peak, the factory employed 150 men.

In December 1881 a large fire destroyed most of the business. It was discovered by night watchman Charles McCarty on the second story near the elevator. The only other person in the building was engineer James Fitzpatrick, who was just getting up steam for Monday’s shift. Within a few minutes the entire main building was engulfed in flames which could be seen in Ballston Spa five miles away. The stables and office were also burned, but the nearby residences, store, dry-houses, and Literary Society’s hall were all saved.

The total monetary amount of the loss was estimated at a whopping $125,000, but Milton Center would soon lose much more. Rather than rebuild the tannery as it was, Haight decided to move the plant to Ballston Spa to take advantage of the Delaware and Hudson Railroad that operated through town. Within just a few years of the tannery’s removal, the hamlet had almost become a ghost town, as most of the workers moved closer to Ballston Spa to continue their employment.

Haight lost no time in rebuilding his enterprise since his products were in high demand, and insurance covered 90 percent of his losses. By the end of 1882, the tannery was in full operation.

The events of Haight’s death in October 1891 were somewhat mysterious. After his son Theodore made a recovery from a long illness, Haight and his wife sought to refresh themselves with a long drive in the country. While riding, he was attacked by a pain which stayed with him for the rest of the day. He fell asleep that night and never woke up, remaining unconscious until 6 p.m. the following day, when he expired.

Within 15 years of the move to Ballston Spa, the tannery was one of the largest in the nation thanks to the efforts of Haight’s two sons, H. Vasser and Theodore. The firm was reorganized in 1899 when it was purchased by American Hide and Leather. In that year it employed 350 people and had sales of about $750,000. It was an immense complex, comprising over 25 buildings and covering several acres of land on both sides of Gordon Creek. After a century of operations in the town of Milton, the tannery finally closed its doors in 1960.

Timothy Starr is an independent historian and author. One of Timothy Starr’s 16 local history books is entitled “Lost Industries of the Kaydeross Valley,” which details the Milton tannery and many other industries throughout the town of Milton and Ballston Spa. Tim can be reached at This email address is being protected from spambots. You need JavaScript enabled to view it.

More in this category: « Major Calvin W. Preston of Galway: Soldier & Hurricane Survivor Christmas in Old Saratoga »
back to top