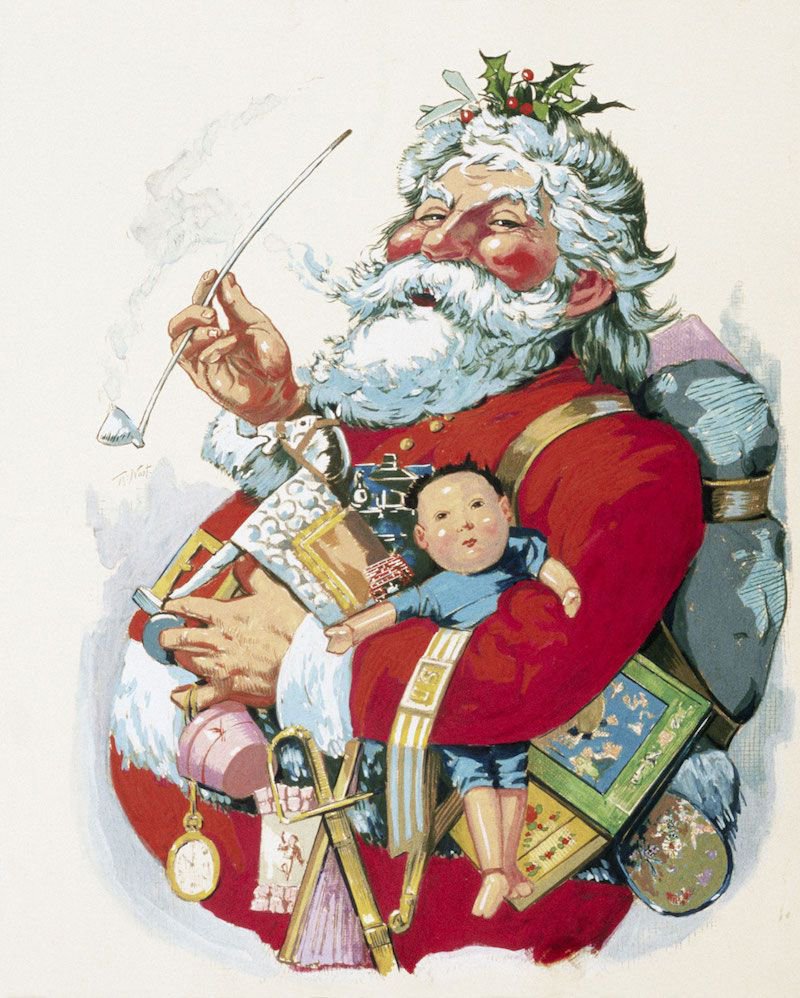 As we approach Christmas 2020 we sometimes forget that the holiday traditions we celebrate today in Saratoga Springs have not always been in practice, especially during the 1800’s. A walk around Saratoga Springs in the 19th century would have not offered glimpses of decorated-lighted houses, lawn inflatables and the names of Rudolph, Grinch and Frosty. It was a different time and a different village.

Christmas in the 1800’s in Saratoga Springs would have been enjoyed by a smaller year-round population. Much of the historic stories that we enjoy about early Saratoga are rooted in the wealthy visiting during the summer months. December would have been a very different environment. The population of the village was only between 2,000-6,000 residents in the winter, and that represented a more working-class population, with a few wealthy residents.

Most working-class families would not have started to put up Christmas trees in their homes until after the Civil War.  Queen Victoria of England helped to make the Christmas tree a main decoration starting in 1841. Victoria had married Prince Albert from Germany and he insisted on the tradition he was used to in his native country. London newspapers covered the decorating of their tree in 1848 and word of this event didn’t get notoriety in American until 1849. Even then it was considered to be a tradition that the wealthy would enjoy. It took about 15 years until the common man would embrace this tradition in America.

The Christmas trees of today are usually illuminated by many white or colored electric lights. We must remember that Edison did not apply for a patent for this invention of the incandescent light bulb until January of 1880, so the early illumination was by small candles placed on the branches. Even the tradition of a White House Christmas tree wasn’t started until 1889, when President Benjamin Harrison put up a tree. The New York Times covered the event and described not only the ornaments but the presents under the tree.

A main figure of Christmas today is of course Santa Claus. Santa is also a late comer to the Christmas party. The word Santa Claus is English coming from a Dutch word “Sinterklaas” for the patron saint of the Dutch, St. Nicholas. Stockings were hung on the eve of St. Nicholas Day, December 5th. A poem published in 1821 suggests that St. Nick had a sled pulled by a reindeer. When Clement Clark Moore wrote the famous poem “The Night Before Christmas” in 1823 he had changed the sleigh to be pulled by 8 reindeer and named each one. A drawing of St. Nick did not appear until noted cartoonist Thomas Nast showed Santa Claus in a sleigh visiting a Union Army Camp in January of 1863. Nast’s drawings were so popular that he continued them for many years and over time added a red suit and a North Pole workshop with elves.

So, Christmas in early 19th century Saratoga was different compared to our traditions of today. By the beginning of the 20th century the trees, lights and names were starting to change until we have a closer resemblance to our view today. Even during this terrible pandemic, Saratoga residents have found ways to continue to innovate and celebrate the holiday. Enjoy the holiday season and as Clement Moore wrote,” Happy Christmas to all and to all a good night.”

Charlie Kuenzel taught at Saratoga High School for 36 years and was co-owner of Saratoga Tours LLC for 19 years. Author, lecturer and currently President of Saratoga Springs History Museum, Charlie loves Saratoga History and can be reached at This email address is being protected from spambots. You need JavaScript enabled to view it.

Read 856 times
More in this category: « Communities Transformed by Tannery Fire Life and Death of a Ballston Patriot »
back to top