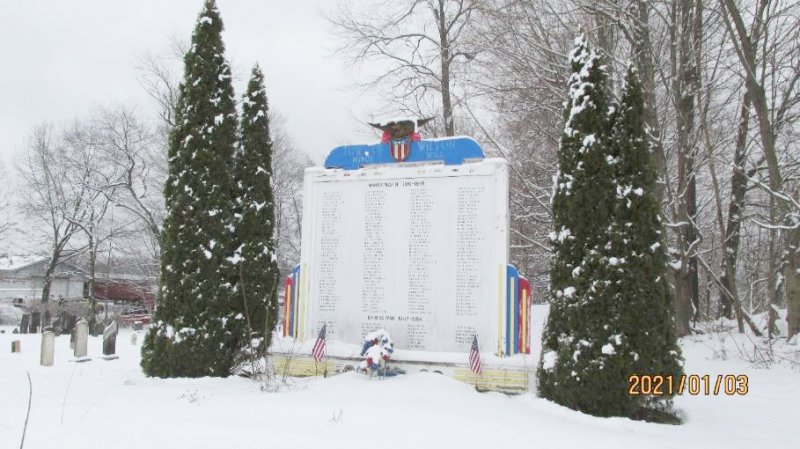 In winter, it stands silently like a lonely sentinel, set back from Ballard Road. Day and night the traffic whizzes by the Town of Wilton’s Veteran’s Honor Roll, yet its presence is overlooked by most.

There is a stone bench for the rare visitor to rest upon and perhaps contemplate the meaning of the honor roll and the lives that were once lived. An American Flag flies proudly at the top of a pole.Just below it flies a POW flag to further remind us of what many endured in service to their country.

This is not the first monument to honor our veterans.   In July of 1919, a bronze tablet was erected by the citizens of Wilton, in tribute to the 57 soldiers, sailors, and marines from Wilton that served in WorldWar I. That bronze tablet now resides within the Wilton Heritage Society Museum, located on Parkhurst Rd., at the base of Mt. McGregor.

The original WWII Honor Roll was constructed in 1942 and stood in front of the old Wilton Town Hall on Ballard Road. The monument was destroyed by a snowplow in 1970, and subsequently the Town Hall itself burned down in 1973. According to the Glens Falls Times the monument was dedicated on December 6, 1942 – one day before the one-year anniversary of the attack on Pearl Harbor.  The dedication ceremony was witnessed by a large crowd, including parents of men in service, Boy and Girl Scouts, members of defense organizations, and local dignitaries. Music was provided by the South Glens Falls High School Band.

At the close of the service, a procession was led by William Petingill, the only young man home on leave at this time. Mrs. Foster Huntley, the mother of the first Wilton casualty John Huntley Jr., read the dedication and unveiled the Honor Roll. The Wilton families were proud of the sons, fathers and daughters ready to fight in the World War in Europe and  Asia.

The original Honor Roll contained the names of 86 service members. In 2005 the honor roll was relocated and replaced by an updated version which honors more than 200 veterans of World War II and the Korean War. A Mount McGregor corrections officer, Joseph Maniaci had read about the former monument and contacted town historian Jeannine Woutersz. Together the idea arose to recreate the monument. The town supplied the wood, paint and other supplies, and under the supervision of the prison vocational instructor Stephen Pentlen, prison inmates participated in this unique community service project. Prison superintendent Harold McKinney stated “The inmates are proud of their work” and “The guys who worked on this were skilled.” Over 400 hours were spent hand painting the many names.

While the monument was a welcome gift to the town of Wilton, the materials used have not withstood the test of time. After being exposed to the elements for 15 years, the Honor Roll has become faded and is quickly deteriorating. The front side, with a hand-carved, gold-colored eagle atop still puts on a good face, honoring those who have served, but the backside of this Honor Roll is far less dignified – the wooden framing is beginning to rot, the board that the names are stenciled upon itself is starting to separate.

As we enter 2021, a committee is forming, composed of people in Wilton and the surrounding area who will work toward getting the Honor Roll replaced and updated with the names of veterans from subsequent conflicts, most notably the VietNam War, and the two Gulf Wars. The committee was envisioned by our former town historian Jeannine Woutersz and retired educator Harriet Finch, who refers to this civic monument as “Sacred Space.” Our goal is to create a comprehensive, inclusive list of all Wilton Veterans and the time they served, and to honor their service with a new memorial.

The biggest challenge will be to raise the funds necessary to construct the monument. For over 200 years our town has shown generous community spirit, so we are optimistic that we can raise the funds needed to complete this project that is so important to the heart and history of our community. For more information, contact Town of Wilton Historian Karen James.

Karen James is a life-long civil servant, retired after a 36-year career in Information Technology for New York State. She first became interested in Wilton History when she authored “First Town Meeting, Wilton NY”, a reenactment of that 1818 meeting, for the Wilton Bicentennial. Karen is currently the Wilton Town Historian and can be reached at This email address is being protected from spambots. You need JavaScript enabled to view it.

More in this category: « The Life and Legacies of Spencer Trask Saratoga Soul Brandtville Blues »
back to top