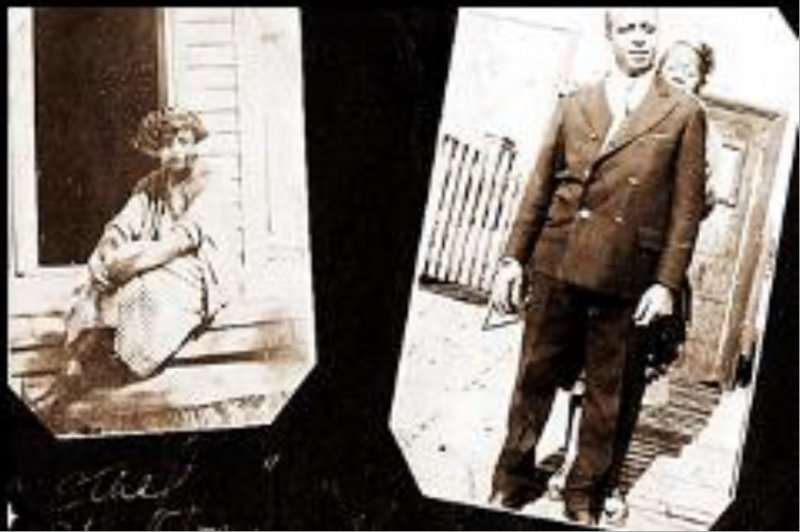 Married on May 30, 1887, soon afterward grandfather Emory’s parents started their family. Initially living in Amsterdam, NY, their father is listed in the city directories as a laborer, stove mounter and tin smith. Born 14-months apart, the contrast in Grandfather Emory and his brother William’s differing lives and journeys is both sanguine and somber.

Sometime after their father passes away just before Thanksgiving in 1894, their widowed mother moves her four children to Saratoga Springs where it seems that her family has been living as early as the 1850’s. One daughter Lilliana who passes away in Amsterdam during childhood is actually born in Saratoga, but is buried with their father in Amsterdam’s Green Hill Cemetery.

William is a handsome storied fella whose dramatic episodes are well documented in local newspapers. Somehow it seems that he didn’t get along with his mother’s new husband. William rejects life in Brandtville, preferring the dangerous drama of street life and becomes a wayward youth.

In 1903 William befriends another ‘colored’ homeless youth named Moran. The duo gets caught by police violating Sunday Law, shooting a hot craps game on Ash Street when they should be attending church. William has previously been expelled from school and seems to be in a downward spiral. Without family or a guardian, Moran has been sleeping in alleyways and remains homeless as the weather changes to freezing cold. When the duo appears in court, Moran asks the judge to send him to the Rochester Industrial School where the judge decides to assign them both.

With no record of William’s length of stay in Rochester, he later returns to Saratoga and in 1913 is still single and living with his lady on Monroe Street. In the absence of romance, one might pine for the presence of a paramour... William’s lady is described as ‘Mrs.,’ so she may be a widow. She is also a white woman with a five-year-old daughter. The record states that the police are called to their Monroe Street residence where at the time there is an accusation against William related to the discipline of her daughter.

Racially speaking, one might conjecture that this should be the immediate end of William. The shocking twist and turn of plot leaves a most surprising conclusion. William is relieved of all charges.

His lady is charged with endangering the morals of her child for living with a black man. Soon afterward, the lady is required to undergo examination and is sent to prison at the downstate Reformatory for Women in Bedford, NY. This facility remains open, and is one of the oldest and largest maximum security prisons for women in New York State. Her daughter is committed to an orphanage, the St. Vincent Female Asylum in Troy. How this all resolves remains a mystery to me.

June 1, 1917 William is registered for the World War 1 draft and is living with his new lady at 18 Chapel Street in Albany. He lives for 23 more animated years and passes away shortly after his 47th birthday in 1940.

U IS FOR UNDERSTANDING, UNCOVERING AND UNFORTUNATE

Understanding the racial dynamics of being people of color and residents of Saratoga’s Brandtville continues to be an ongoing discovery process, eye-opening and brow-raising experience. Sometimes seeking social options within and beyond the immediate Brandtville neighborhood results in tragedy. My Brandtville home deed dates from 1904. This same year, a tragic murder takes place in Searings Alley, which is located off Congress Street and is infamous for various crimes.

It is important to know how greatly race can and still does play a role in our daily experience and certain crimes. The newspaper describes a mixed-ale party gathering at a Searings Alley home to celebrate the arrival of guests from out of town. The newspaper names William Wicks and Arthur Deffendorf as two negroes in attendance. The report also names the hosts and guests, relating their ethnicity and others described as ‘low whites’. Interestingly the account does not say that the two negroes are armed or have a weapon. Some drinking is precursor to a ‘sparring game’ that takes place. The object is for two men to wear their hats while sparring and see whose hat gets knocked off first. Whoever loses their hat first will have to buy a few quarts of beer to supply the party.

Apparently the sparring match starts out friendly, but ends with a pile of people on the parlor floor. William and Arthur recover themselves and flee from the home via Searings Alley. Their assailants give chase, and Arthur falls down in the alleyway. Managing to catch both of them, both William and Arthur are stabbed in an attack described as brutal, beastly and bloody. William’s wounds are fatal, but Arthur survives. William’s exact family relationship remains a question to me. While it is clear that Arthur Deffendorf is Grandmother Maud’s stepfather, I now understand that this tragedy is surely the reason that her mother and stepfather leave Saratoga Springs and relocate to Red Bank, New Jersey leaving Grandmother Maud behind to be raised by her Grandmother Julia and Uncle Howard.

Carol Daggs is the author of Saratoga Soul Brandtville Blues. Daggs’ creative name is Jazzage: the artful application of musical Jazz sounds to the auditory apparatus and soul via vocal and instrumental flow. Jazzage uses each letter of the alphabet to carefully craft chapters A-Z. Each chapter relates to Daggs family’s 19th and 20th century life experience in Saratoga Springs’ Brandtville: a predominantly African American farming community located south of the city corporation line. This excerpt is two chapters from her book. Please contact the author for all book-related inquiries at This email address is being protected from spambots. You need JavaScript enabled to view it.

More in this category: « Wilton’s Lonely Sentinel Who Was Saint Isaac Jogues? »
back to top