The Whitneys of Saratoga: Part Two 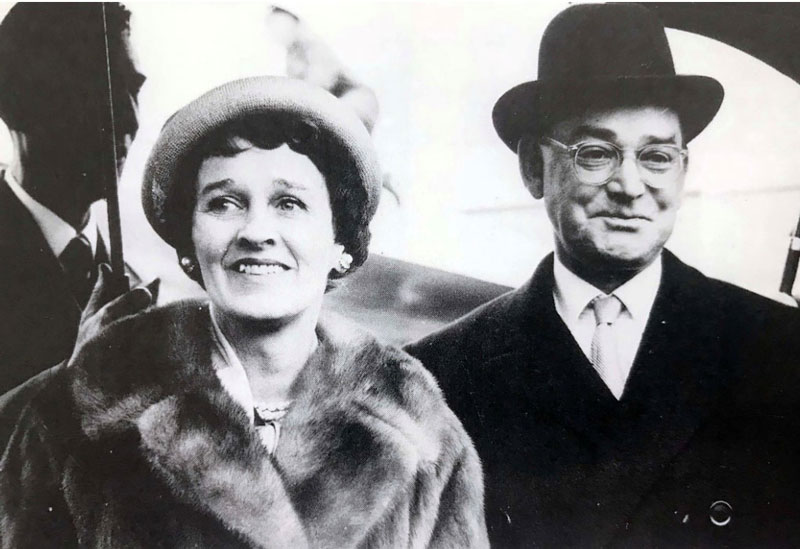 Last week we looked at the early years of the Whitney cousins and their achievements prior to the Second World War. In this final installment we will see them at war and in the political arena. We will read of their great racehorses and the profound effect the Whitney family had on Saratoga, their adopted summer home.

WAR, POLITICS AND A RACEHORSE FOR THE AGES
The 1940s would complicate the lives of the cousins, as it did so many Americans. The unprovoked attack on Pearl Harbor by The Empire of Japan brought our country into the Second World War. Jock and Sonny were quick to enter the fray.

Jock joined the Army Air Forces where he served as an intelligence officer on the staff of General Ira Eaker, rising to the rank of Colonel. In 1944 he was taken prisoner by the Germans. In route to a prisoner of war camp, he was able to escape his captors. For meritorious service during the war, Jock received both the Legion of Merit and the Bronze Star.

During the conflict Jock did manage to marry for a second time. He wed Betsey Cushing, formerly the daughter-in-law of Franklin D. Roosevelt in 1942. Along with Babe and Millie she was one of the glamorous Cushing sisters. They captured fame as socialites of the era, who through their beauty and charm ascended to the top of American aristocracy.

Sonny also served with distinction during the war. On the outbreak of hostilities, he resigned as Chairman of the Board of Pan American Airlines. Without hesitation, he, like Jock, joined the Army Air Forces. Sonny served in both the India and North Africa Theaters. As an intelligence officer with the Ninth Air Force he was heavily involved with the planning of the Ploesti air raids. For his contributions to the war effort Sonny received both the Legion of Merit and the Distinguished Service Medal. The war ended in 1945. The cousins came home to the states.

Two years later Sonny entered government service. Harry Truman was President and he liked what he saw in the newcomer to politics. “Give ‘em hell Harry” offered Sonny the position of Assistant Secretary of the Air Force. Sonny accepted the post. In 1949 he switched gears and headed over to the Commerce Department. There he served as Under Secretary through 1950.

During that period Sonny’s racing stable was riding high. His three-year-old colt Phalanx became a star during the 1947 racing season. To Sonny’s delight Phalanx won the third leg of the Triple Crown, the Belmont Stakes and was named as American Champion Three-Year-Old Colt. Four years later Sonny took all the marbles. His colt Counterpoint gave him and Hall of Fame trainer Syl Veitch their second Belmont Stakes success. He continued his superb campaign with a win that fall in the prestigious Jockey Club Gold Cup. For his efforts Counterpoint was named Horse of the Year for 1951.The following year the champ gave Sonny one final gift. He romped home in the Whitney Stakes here at the Spa in the final start of his career. Cornelius Vanderbilt Whitney was on clouds number one through nine, and the best was yet to come.

Cousin Jock leaped back into the business world after the war ended with a new concept, Venture Capital. The firm J.H. Whitney & Co. invested in new ideas that could not get bank approval. It proved to be a resounding financial success. Jock and sister Joan’s Greentree Stable was reaching dizzying heights in the forties. In 1942 the barn sent out a three-year-old colt named Shut Out. He promptly took both the Kentucky Derby and Belmont Stakes. He also notched the Travers Stakes here at the Spa later that summer. Devil Diver was a force to be reckoned with on the racetrack for the years 1943-44. The Greentree Star dominated his opponents during that stretch. He was named Handicap Horse of the Year for both seasons. Devil Diver was enshrined in horse racing’s Hall of Fame in 1980.

In the early 1950s Greentree captured headlines in sports pages across the country. A brilliant thoroughbred with the name Tom Fool would take Greentree to the top of the horse racing universe. He was named Two-Year-Old Colt of the Year in 1951. In 1953 as a four-year-old he reached his peak crushing all opposition. Tom Fool ran the table. He took the New York Handicap Triple, then America’s supreme test for older horses for only the second time in its long history. To Jock’s elation he added the Whitney Stakes to his resume here at Saratoga. It was the fifth time a Greentree runner took the race. Tom Fool swept horse racing honors for the year 1953. He was named Horse of the

Year, as well as best sprinter and handicap horse. In 1960 the champion was inducted into the Horse Racing Hall of Fame. Tom Fool stands high on the list of the greatest racehorses that ever competed on the American Turf.

In 1956 Jock entered government foreign service. His close friend President Dwight Eisenhower offered him the position of the United States Ambassador to Great Britain. Who better for the diplomatic post than an American of British descent that could trace his roots to the Mayflower? John Hay Whitney, along with his elegant wife Betsy brought their brand of American dignity and style to the Court of St. James’s. The year 1961 marked the end of the Eisenhower administration. With that Jock boarded a flight from London to New York and made his return to the private sector.

1958 WAS A VERY GOOD YEAR
Sonny Whitney was a busy man in the 1950s. He was the owner of numerous flourishing business concerns. In 1950 he took the time from a busy schedule to establish the National Museum of Racing and Hall of Fame. He led a group of the sport’s most well-known personalities in making the dream become a reality. The following year the museum opened at the Canfield Casino in Congress Park. In 1955 it was moved to its present location on Union Avenue.

A major turning point in the life of Sonny occurred in 1958. He wed Marie Louise Schroeder in January of that year. The union proved to be the happiest of his four marriages and would last until his death thirty-five years later.

It was at this time that Sonny introduced Mary Lou to his Saratoga estate known as Cady Hill. She instantly became enamored with the property. With a keen eye, Mary Lou noticed that Saratoga, except for a short racing season, was pretty much a ghost town. The lake houses, where late night gambling and world class entertainment once flourished were a thing of the past. The grand hotels that had lined Broadway went the way of the wrecking ball earlier in the decade. Hotels and restaurants were few and far between. Saratoga needed a benefactor, someone who had social standing, flair, a bigger than life personality and connections with all the right people to bring about change. Add to that the Whitney mystique and Mary Lou was the perfect candidate. With Sonny’s blessing, his bride set out to energize and help create an atmosphere that would forge Saratoga into a world-renowned destination.

PUBLISHER, ART COLLECTOR AND A HORSE FOR THE AGES
The year Sonny wed Mary Lou, his cousin Jock entered the newspaper business. He spent a good portion of the next decade as the publisher of the New York Herald Tribune.

Jock was also busy building one of the largest private art collections in the world. He amassed world class paintings by the Great Masters of the seventeenth century and those of the Impressionist Movement of the late 1800s. After Jock’s death, the magnificent collection was disbursed at his wife Betsey’s discretion. Many of the notable works were bequeathed to their favorite museums, the National Art Gallery and The Museum of Modern Art.

Jock’s beloved Greentree reached a milestone in 1968. Stage Door Johnny took the 100th running of the Belmont Stakes. It was the fourth time the renowned stable took the race. It also marked the last of seven wins in Triple Crown events for Greentree. The stable continued to race quality horses until 1982. During that year Jock passed away. It spelled the end for Greentree. It’s famed salmon pink with black striped sleeved silks were retired. The stock was sold off and horse racing had lost one of its greatest names.

HELLO MARY LOU. WE LOVE YOU
Mary Lou embarked on her venture to enhance Saratoga. The Whitney Gala at the Casino in Congress Park became her trademark event. She enticed the rich and famous to attend the annual August charity ball.

It became the main attraction of the racing season. Mary Lou was soon anointed as “The Queen of Saratoga.” She along with Sonny were among the early benefactors of the Performing Arts Center in the Spa State Park. The amphitheater brought Saratoga to the forefront of the summer music and dance scene. The Philadelphia Orchestra and New York City Ballet took center stage to open the season. Then it was time for the great entertainers and rock bands to perform in front of packed houses.

Mary Lou also worked with Saratoga dignitaries and businessmen to further the development of the downtown area. Another project that she innovated was the formation of the National Museum of Dance and Hall of Fame.

Mary Lou had a special interest in the welfare of the backstretch employees. Along with John Hendrickson, she worked tirelessly to better the conditions for those who made their living on the backside of the track. To chronicle all her achievements in the rebirth and promoting of Saratoga would require much more attention than is available here.

THE END OF AN ERA
In 1992, at the age of 93 Sonny passed away. He and his cousin Jock were the last of the Whitney line to live the life of celebrity. They carried the family name to even greater heights than their ancestors. The cousins were lions in the world of business and finance and left an indelible mark on their favorite pastime, The Sport of Kings. We will never see the likes of them again. Saratoga is a better place for having known their presence here as an integral part of its storied past.

More in this category: « The Whitney’s of Saratoga: Part One The Short but Eventful Marriage of Henry and Eliza Vrooman »
back to top