Who Was Saint Isaac Jogues? 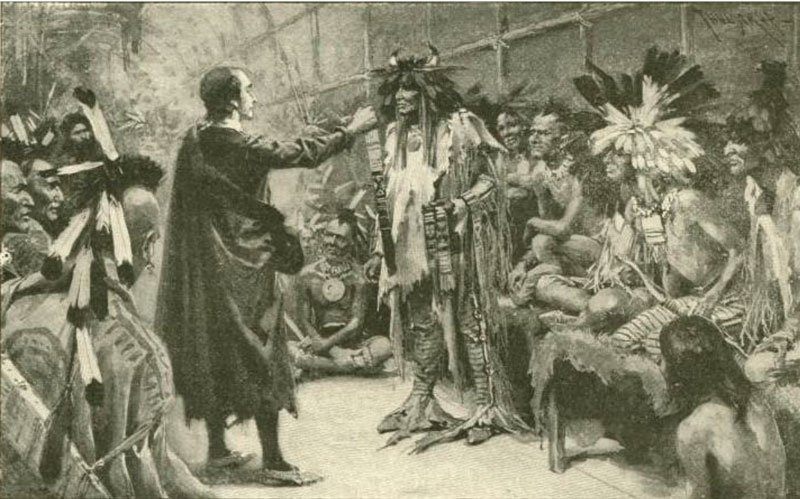 Before we address this question, we should acknowledge the traditional custodians of the land when I write this article - the Iroquois Confederacy and the Algonquians - and pay our respect to their elders’ past, present and emerging.

One answer is that Saint Isaac Jogues is the statue up on Lake George.  He is honored as one of the first white European men to gaze upon a most beautiful and pristine body of water.  He named the lake “Lac Du Saint Sacrement,” which means the Lake of the Blessed Sacrament. That name remained for the lake for more than 100 years until British General William Johnson renamed it for his King, George II.

Another might know Saint Isaac Jogues as a French Catholic missionary and martyr who traveled and worked among the Native American (First Nations) populations in Canada and New York.  What most do not realize is that he was one of the first Europeans to venture into and record his travels in Saratoga County and beyond in the Mohawk Valley.

Isaac Jogues was born in Orléans, France, into a bourgeois family, on 10 January 1607. He was educated in Jesuit schools and entered the Jesuit novitiate at age of 17.  The Jesuit community had a strong missionary focus. Twelve years later, he was ordained a priest and soon after embarked to New France (Canada).  Jogues was assigned as a missionary to the Huron and Algonquian peoples (allies of the French) in Quebec.  For six years, Jogues lived in the village of St-Joseph and learned the ways and language of the Hurons. Jogues was then charged with building a new mission at Fort Sainte-Marie in modern Ontario, Canada.

On August 3, 1642, Jogues, Guillaume Couture, René Goupil, and a group of Christian Hurons were heading back from Quebec City when they were ambushed by a war party of the Mohawk Nation, part of the Iroquois Confederacy. The Mohawks beat and tortured Jogues and the others.  The war party then took their captives on an over 100 mile journey to the Mohawk Valley. Jogues and the others were brought to various Mohawk villages to be tortured.  Throughout his captivity, Jogues comforted, baptized, heard confession from, and absolved the other prisoners. Joques was given to an older Mohawk as a slave to perform menial tasks.  In March 1643, Jogues accompanied his master to Saratoga Lake for a four-day spring fishing trip.  He is the first European to record his trip to Saratoga Lake.  The Dutch in Albany heard of Jogues plight and tried unsuccessfully to secure his release.  Ultimately, the Albany Dutch helped Jogues to escape.  Jogues was the first Catholic priest to visit New Amsterdam (New York) on his journey back to France.

On his arrival back in Europe, Jogues was received as if he had risen from the dead.  He was an object of curiosity and reverence.  Jogues even had an audience with Queen Anne of Austria, who kissed his mutilated hands.  Pope Urban gave him permission to celebrate Mass despite these mutilated hands. “A Martyr of Christ should be allowed to drink the Blood of Christ”, the Holy Father said

Within a year, Jogues was back in Canada. In 1646, Jogues was sent to the Mohawk country to discuss a peace treaty with the Iroquois.  Jogues traveled along the traditional pathway including the Hudson River through Saratoga County to visit those who had helped him escape slavery in Albany.  Then Jogues was on to the Mohawk Valley for a successful peace mission.   Peace was not enough for Jogues.  He was determined to start a mission to share his Catholicism with the Mohawks.  He returned later that year.  But on this visit, he was blamed for a crop failure.  As a result, Jogues was seized by the Mohawks at Ossernenon (now Auriesville, N.Y.). After a cruel beating, a blow from a tomahawk gave him the crown of martyrdom. He died on October 18, 1646.

Jogues, Jean de Brébeuf and six other martyred missionaries, all Jesuit priests or laymen associated with them, were canonized by the Catholic Church in 1930.  They are known as the North American Martyrs. A shrine was built in their honor at Auriesville, New York, at a site formerly believed to be that of the Mohawk village.

Sean Kelleher is the historian for the town of Saratoga, NY. He writes a daily blog at historianatsaratoga.wordpress.com. He is a board member of the Saratoga County History Center. Sean was a member of the New York State French and Indian War 250th Anniversary Commemoration Commission. He can be reached by email at This email address is being protected from spambots. You need JavaScript enabled to view it..

More in this category: « Saratoga Soul Brandtville Blues Overcoming Winter Blues at The Homestead »
back to top