Overcoming Winter Blues at The Homestead 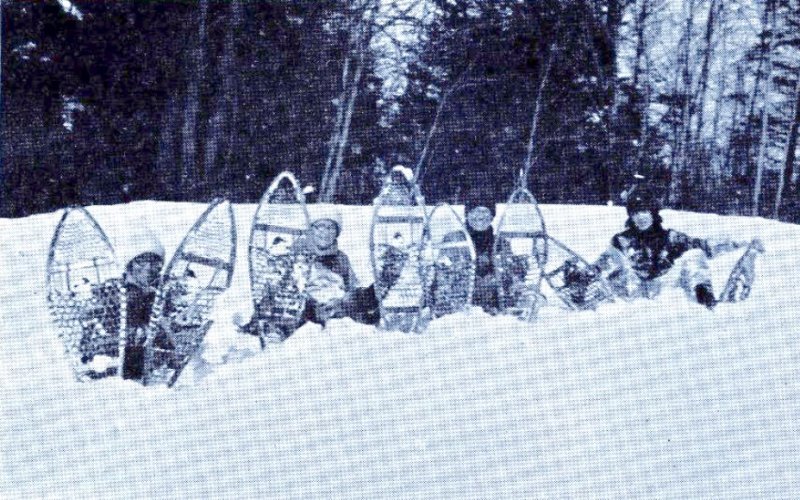 Living at the Homestead was never easy, especially in winter. In December of 1914 the first patients were admitted to the newly built Saratoga County Tuberculosis Sanatorium in the Town of Providence. Located on a piece of land donated by Horace Carpentier years before, the site was in an extremely rural part of the county with no public transportation available to reach the area. The access road was impassable during certain times of the year, especially in the winter.

There were several reasons the Homestead was built there. Probably most importantly, the county was given the land for free with the stipulation that it be used as some sort of a health facility. Also, the belief that the fresh air and quiet nature of the place would help improve patients’ conditions, and the fact that several other proposed sites had been rejected due to the “not in my backyard” mentality of local residents afraid of contracting the highly contagious disease, contributed to the final decision.

In the first several years of admission records for The Homestead, a single word shows up over and over again in the column marked “Reason for Leaving”: Lonesome. TB patients were often confined to their beds for most of the day and night due to the belief that physical activity could aggravate their condition and that rest and recuperation were essential to their recovery. Add to this the fact that family and friends of the patients found it very difficult to visit due to the distance from the population centers of the county and the lack of a railroad or trolley line leading to the facility.

On top of this, even if the family did own a car, the condition of the rudimentary roads used to reach the hospital often made the trip very long and arduous for a relatively short visit. The severity of the situation is summed up nicely by Dr. G. Scott Towne, President of the Board of Managers of the Homestead in his 1924 note to the Saratoga County Board of Supervisors,

“The managers of the Homestead wish to express their thanks to your Board for the purchase of the automobile which was so much needed for the use of the Superintendent. The roads have been especially bad for the past two years and have literally torn the other machine to pieces.”

While the transportation issue would require a significant amount of time and funding before improvements were made, the staff at the Homestead started taking the burden of entertaining the patients into their own hands in order to boost morale. This also benefited the staff themselves, as the majority of them lived onsite as well.

In the early 1920s, an Occupational Therapy Department was added to The Homestead where patients were taught skills such as basketry, painting and knitting. This helped not only to pass the time in winter, but also brought in a profit to the patients. Products such as baskets, knitted sweaters, coasters and painted candlesticks made by the patients adorned store front windows such as those of the Mac Finn Drug Co., on Broadway in Saratoga Springs, who donated space for displaying these items. Dr. Dimock, Superintendent of the facility noted the advantages of this program in his Annual Report of 1924,

“… it employs the patient’s mind along channels apart from his bodily ills, it gives him a chance to learn under a competent instructor the various forms of basketry, rug weaving, decorative art, etc. and to earn a substantial competence from this work while still a patient in the hospital and replacing also that feeling of helplessness which so many of them have, to one of being of some use in the world’s work.”

A Moving Picture Fund created by the patients themselves allowed for the purchase of a projector on which movies were shown weekly, often donated by local businesses such as the Capitol Theater in Ballston Spa. For those patients who were well enough for some physical activity, winter sports such as snowshoeing, skiing and tobogganing all provided entertainment and exercise in the winter wonderland of upstate New York.

For those who could not go outside, a constant stream of magazines, books and puzzles came in as donations from civic groups such as Girl Scouts and Elks Clubs, as well as generous individuals. A local orchestra gave concerts at the facility on occasion and a radio was installed along with amplifiers and headsets throughout the rooms so that even the non-ambulatory patients could listen in.

Eventually, the improvement of roads - especially the construction of Route 29- and the explosion of automobile purchases did allow for more frequent visitation and a stronger feeling of connection to the outside world, which was severely lacking in the early years. In the meantime, the care and creativity of the staff, the generosity of local groups and individuals and the determination of the patients themselves braided together solutions for the loneliness and isolation of being confined in The Homestead.

In our current situation in the winter of 2021, pressed upon us uninvited by the CoVid-19 pandemic, we may have more sympathy for the Homestead patients than we might normally have had. After all, one hundred years later, the need for recreation, entertainment and human interaction hasn’t changed that much, has it?

Lauren Roberts is the Saratoga County Historian. She is co-host of the WAMC podcast A New York Minute in History, along with NYS Historian Devin Lander. Roberts co-produced the recently released documentary Harnessing Nature: Building the Great Sacandaga, which chronicles the creation of the Sacandaga Reservoir. She is also the APHNYS Regional-Coordinator for municipal historians in the Capital Region. You can reach Lauren at This email address is being protected from spambots. You need JavaScript enabled to view it..

More in this category: « Who Was Saint Isaac Jogues? The Whole Story of Ballston’s Miss Heaton »
back to top