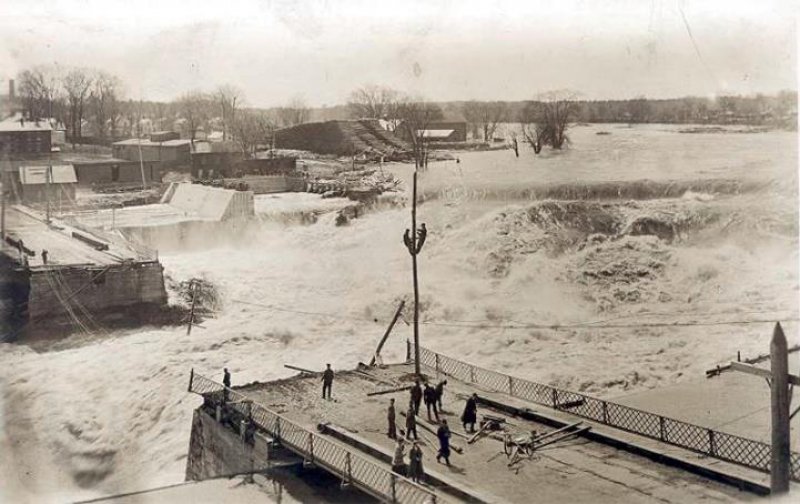 Before the 20th century, the upper Hudson River was used commercially as a conduit to ship timber logs downstream to the paper mills along the river.  Logs were stored in pens until the spring melt in the upper Hudson region significantly increased the flow of the river. When the flow rate was right, the pens were opened and the logs were sent careening downstream to the mills.  The Sacandaga River joins the Hudson River at Hadley, with each river providing approximately equal flows.  The watershed of the Sacandaga River alone is approximately 1000 square miles, so the melt of the winter snowfall could provide a large amount of runoff.

Each spring, the flow of the Hudson would increase significantly, but periodically there would be a combination of warm temperatures, high local rainfall, and a large snow cover to produce extraordinary runoff over a short amount of time, called a freshet.   Flooding was also a major concern to the paper mills and other businesses along the river, causing severe economic dislocation

For almost 300 years floods had devastated the upper Hudson from Luzerne to Albany and points south, as recounted in Munsell’s Annals of Albany, 1850

April 30-May 3, 1639 “Whilst I was at Fort Orange, the 30th of April, there was such a high flood at the island on which Brand-pylen lived, - who was my host at this time - that we were compelled to leave the island, and go with boats into the house, where there were four feet of water. This flood continued three days, before we could use the dwelling again. The water ran into the fort and we were compelled to repair to the woods, where we erected tents and kindled large fires.” – Description of the Hudson flood of 1639 by a visitor to Albany named DeVrie

March, 1646. “The winter which had just terminated, was remarkably long and severe. The North (Hudson) River closed at Rensselaerswyk, on the 24th November, and remained frozen some four months. A very high freshet, unequalled since 1639, followed, which destroyed a number of horses in their stables; nearly carried away the fort, and inflicted considerable other damage in the colonie.

March,1790. Flooding on the Hudson River, as described by the Albany Register for March 29, 1790, was initiated by a week of heavy rains. “The weather for a week past being uncommonly moderate, and attended with considerable falls of rain and some slight snows, raised the river to such a degree on Saturday last, completely to carry off the ice; and as by accounts from Poughkeepsie, &c. the river has been some time since clear.

March,1818. This flood appears to have been quite sizeable according to Munsell. “The water rose to great height in the river the night of the 3d March, so that several families in Church St. would have perished if they had not been rescued. The water was two feet deep in the bar room of the Eagle Tavern, on the southeast corner of South Market and Hamilton streets. Sloops were thrown upon the dock, and the horse ferry boat was driven about half way up to Pearl Street. A family occupied a house on the island opposite the city, who were rescued by the people of Bath. So great a freshet had not been known in forty years.”

Flooding continued on a regular basis, but 1913 was to prove the turning point. At Fort Edward -the highest recorded flood level - 34 feet - was reached on March 14, 1913 causing general devastation in the area . The floods waters were severe enough that year to wash out the bridge connecting Glens Falls and South Glens Falls.  The bridge fell on March 27, 1913 at 9:55 p.m.  This flow rate caused major flooding to the downstream communities of Glens Falls, Waterford, Green Island, Cohoes, Rensselaer and Albany.

There were enough similar events, loss of property, and damage to infrastructure that the communities and businesses along the Hudson River asked the New York State Legislature to take action to control the water flow.  These organizations and municipalities provided the funds to build the reservoir as a water storage facility.

As a result of the 1913 flood, the Legislature passed the Burd Amendment allowing the use of 3% of the New York State Forest Preserve for the purpose of creating reservoirs to regulate stream flow. In 1922 the Legislature formed the Hudson River Regulating District. The purpose of the Regulating District was  “to regulate the flow of the Hudson and Sacandaga Rivers as required by the public welfare including health and safety.” In 1927 construction began on the  Conklingville Dam. The dam was completed three years later and the flooding of the reservoir began March 27, 1930. After almost 300 years It took the major flooding of March, 1913 to finally get the Legislature to move forward on authorizing the building of the Sacandaga Reservoir.

Fred Wilhelm is a retired General Electric engineer who lives along Great Sacandaga Lake. He has an interest in not only how the Lake was built and controlled, but WHY it was built-in the first place.

More in this category: « St. Patrick’s Day in Schuylerville 1898 How Ballston Spa Became the County Seat »
back to top