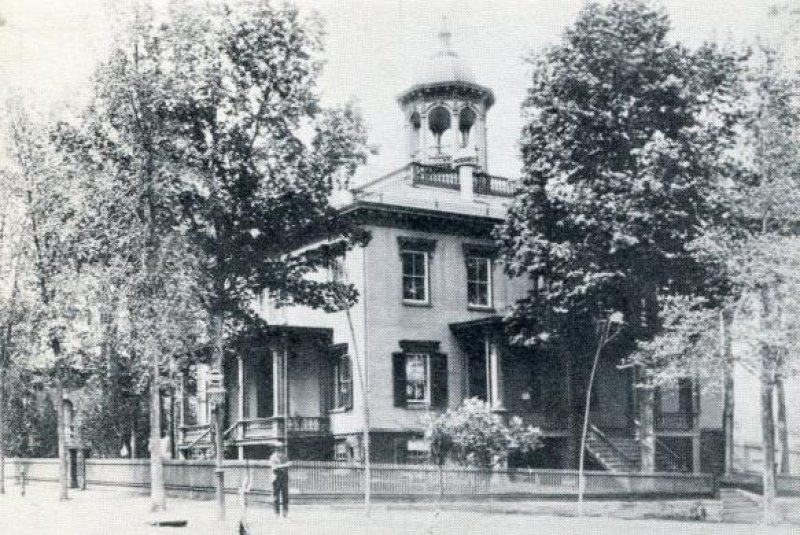 In 1791, the newly formed Saratoga County Board of Supervisors met for the first time at Mead’s Tavern in Stillwater. It was common for elected officials or committees to meet at a public house before the building of a dedicated government facility. However, within the next few years it was decided that a courthouse building and jail should be erected, and the Town of Ballston was chosen as a central location. Captain Edward A. Watrous donated a site on his farm for the courthouse on Middleline Road and construction began in 1795. Court was first held there in the spring of 1796. A small hamlet grew up around this area which became known as “Courthouse Hill” complete with taverns, hotels and law offices. The county seat seemed to be firmly cemented at that location, but that all changed in 1816.

Fire broke out in the courthouse in the middle of the night on March 23. Two prisoners, Fones Cole of Northampton (held on a forgery charge) and Peter Drapoo (a horse thief) used a candle they purchased from the jailor (reportedly for playing cards) to set fire to their cell and escape. Two other prisoners also escaped during the fire but a fifth prisoner, George Billings, was chained to the floor and perished in the flames.

Before the smoke cleared several towns clamored to gain control of the county seat including Waterford, Malta and Galway but two front runners quickly emerged.  Saratoga Springs and Ballston Spa pitted themselves against each other to win the prize.

Ballston Spa (sometimes called Ballston Springs) was well known because of its mineral springs which were supposed to contain healing qualities. The powerful, land-rich Nicholas Low established the village, which was located on land he was granted through the Kayaderosseras Patent. Noting the influx of health-seeking travelers, Low built a monstrous hotel, the San Souci, carved out lots and laid streets in his flourishing village.

By the early 1800s Saratoga Springs was also an up-and-coming village built around attracting visitors to their mineral springs and was starting to overtake Ballston Spa in popularity. Since both of these villages were vying to attract visitors as well as expand their political influence they were in a desperate fight to convince the New York State Legislature to choose them as the new seat of government for Saratoga County. Each village put together a group of prominent citizens who tried to show the legislature that they were the best location.

When the Ballston Spa committee heard rumors about what the Saratoga Springs committee was proposing, they retaliated. In a letter written by Thomas Palmer to Nicholas Low on October 31 1816 he advised:

“As the time approaches when the Legislature will fix the site of the courthouse and gaol in this county and every exertion made by our opponents to defeat us. We are desirous that nothing should be left undone that can have a bearing in our favor or counteract the efforts of our enemies to defeat us. It is suggested that one argument intended to be urged by our opponents is that a lot will be given the County at Saratoga Springs for the courthouse and gaol. Should that be the case we must be prepared for them. Will you be pleased to write to …our committee assuring them that a lot will be given the county at the village of Ballston Spa for the courthouse and gaol…”

Nicholas Low heeded the advice of Palmer and did just that, using his influence to tip the committee in favor of Ballston Spa as the County seat. On March 14 1817, after a long debate, the New York State Legislature passed a law stating that the seat of Saratoga County would be located in Ballston Spa.

Following through on his promise, on July 5th, 1817 Low filed a deed with the County Clerk giving the Supervisors of Saratoga County a lot on High Street for the purpose of building a courthouse and jail. Construction commenced later that year and was finally ready to hold court by 1819. The style of the building was essentially the same as the original building on Courthouse Hill, though they built this one out of brick. This two-story building served as the county courthouse until a new one was erected on the same spot in 1889. In 1968, the courthouse moved across the street to its present location.

Ballston Spa has proven itself as a well suited, central location for our county seat over the past two centuries. History leads a winding path and who knows, were it not for a fateful candle and two scheming jailbirds, the county seat may still have been at Courthouse Hill today!

Lauren Roberts is the Saratoga County Historian. She is co-host of the WAMC podcast A New York Minute in History, along with NYS Historian Devin Lander. Roberts co-produced the recently released documentary Harnessing Nature: Building the Great Sacandaga, which chronicles the creation of the Sacandaga Reservoir. You can reach Lauren at This email address is being protected from spambots. You need JavaScript enabled to view it.

More in this category: « How Floods Created the Great Sacandaga Lake Joe Bettys – Patriot and Traitor »
back to top