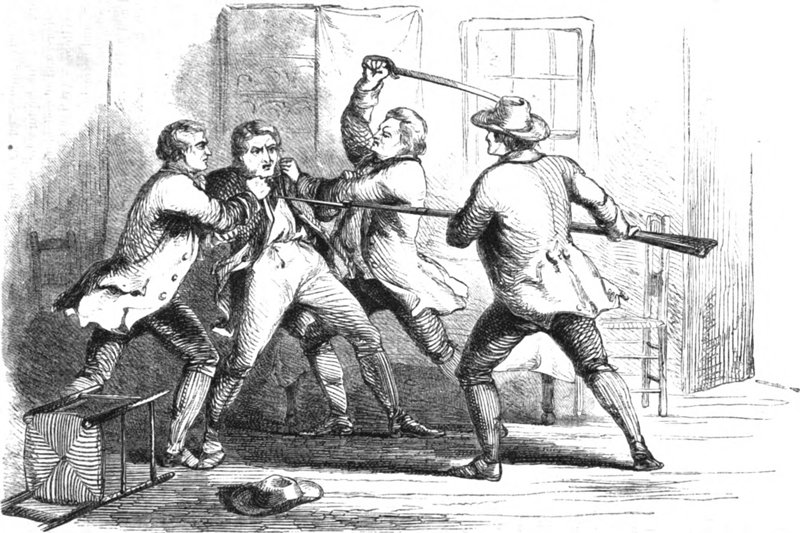 Illustration of the capture of British Loyalist spy Joseph Bettys in the Town of Ballston, New York, 1782. Originally published in United States Magazine, 1857.

April Fool’s Day, April 1, 1782, Joe Bettys was hanged. It was, as was the custom, a public spectacle, not in Ballston but in Albany where the notorious traitor had been taken for his trial and sentencing.  As he got to the top of the scaffolding to meet his maker and a noose was tied around his neck, he jumped—yes, he jumped to his death, ensuring that he would break his neck and ensuring that HE killed himself. No one else killed him. A fitting ending to a sad story.

Today, on Route 50 about a mile north of the Lakehill Road and Route 50 intersection, sits an old stone house, one that dates back into the 1700’s.  It is a striking house today, with its cement walls and a very short upper story.  But it was even more striking back in the 1700’s-- and not for its looks.

Living in that house, which also doubled as a local tavern, was the Bettys family.  The father and husband of the household was a Loyalist, supporting the British side in the Great Revolutionary War against England.  Son Joe, however, was on the opposite side: he was a rebel.  One can only imagine the arguments that must have occurred between father and son.

Finally, Joe decided to take some action for his preferred side. He left home and joined the Rebel forces. He traveled into northern New York, joined up with the later-to-be infamous Benedict Arnold in the Lake Champlain area and fought with incredible bravery and skill. In one military engagement, he fought while every one of the rebel commissioned officers had been killed or wounded; then took charge himself and continued to fight on.

Because of all he had done in numerous battles, he felt he should be commended for his service and given an advancement in rank. Angered that he was not, he deserted the rebel forces, went to Canada and joined the British side. He then started carrying spy messages behind the lines from one side to the other.

Yes, for many of the same reasons that Arnold later became a traitor, so did Ballston’s Joe Bettys. And, for many years, he delivered much information to the British side until finally he got caught.  He was sentenced to die but, because of his aged parents and Commander-in-Chief George Washington’s compassion, he was pardoned for his crimes and was told to cease all previous treasonous activities.

After that, he truly seemed to take delight in harassing those who had previously helped him! He continued his treasonous activities all over the area. A few years later, he was seen lurking in the woods in present-day Clifton Park and, when questioned, he quickly threw a paper in a fire—a paper which turned out to be more secret information he was trying to deliver. He was taken to Albany, tried, convicted, and hanged.

One can only imagine the horror of his family and their reaction to what their family member had done. Because of that, the town of Ballston in conjunction with the Pomeroy Foundation, erected a marker in Hillside Cemetery in Burnt Hills to the memory of Joe Betty’s family. The marker is inscribed: “Bettys Family. Joseph died 1804 and Abigail died 1791.  Local innkeepers and unfortunate parents of Joseph, convicted traitor and spy who was hung in 1782.”

Rick Reynolds has been the Ballston Town Historian since 2004. He is a retired social studies teacher at Burnt Hills-Ballston Lake Middle School and is the author of the book “From Wilderness to Community: The Burnt Hills-Ballston Lake Central School District. Rick can be reached at This email address is being protected from spambots. You need JavaScript enabled to view it.

More in this category: « How Ballston Spa Became the County Seat Clifton Park’s Own Amusement Park »
back to top