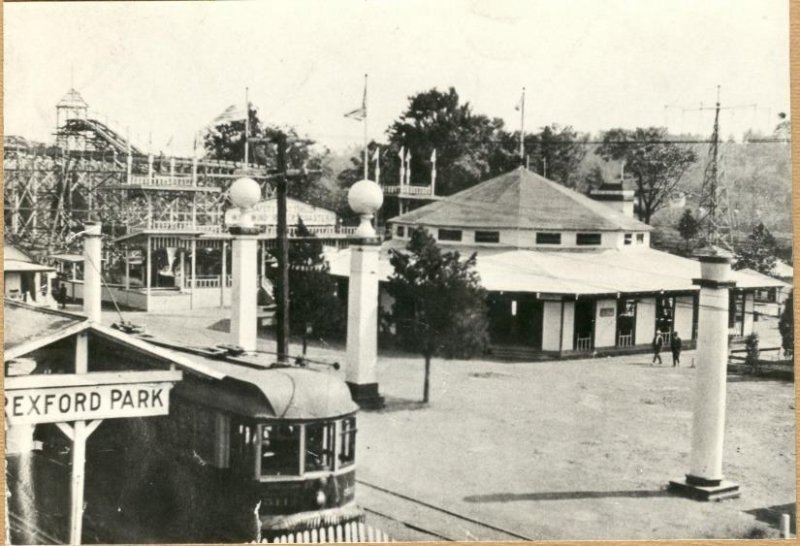 On April 3, 1935, wrecking crews began the demolition of buildings and rides that comprised an amusement park in Rexford.  Few can remember when Clifton Park had its own amusement park.  It was located on the Mohawk River in Rexford near the Alplaus border from 1906 to 1933.  Stanley “Spud” Bartow (1916-2009) of Rexford remembered the “House of Glass” filled with mirrors.  As a kid in the 1920s, he would watch the adults try and find their way out.  He would chuckle when he thought about it.

The secret he said was to keep your eyes on the floor and not look into the mirrors.  He also remembered the rotating barrel that you would try and walk through from one end to another.  The kids managed this quite successfully, but adults again had difficulty, and were thrown from side to side in their attempt to pass through the barrel as it continued to rotate.

Of course, Spud had the early edge on the amusement park rides.  Before the park was opened to the public in the spring, neighborhood kids were employed by the park to clean, test and prepare the rides.  Spud and some of his friends would ride the bumper cars until the metal ceiling was cleaned off by the long rods on the cars that made electrical contact with the metal ceiling.  They would clean the mirrors in the “House of Glass,” and polish the horses on the carousel.  It was truly a fun time for the youth of Rexford.  They were able to enjoy the rides at no charge.

Edgar Shopmyer (1914-2003) of Vischer Ferry Road recalled the first time he rode the “Blue Streak,” the amusement park’s huge roller coaster.  He told of the long slow ride to the top of the coaster, and then as he rounded the crest and faced the steep incline, his heart was in his throat.  No turning back now! And woosh! Before he knew it the ride was over.  This roller coaster was the second one at the park.  The first one, known as the “Whirlwind,” was removed in about 1925 to make way for the larger, more thrilling “Blue Streak.”

The park, first known as Luna Park, after the famous amusement park in Coney Island, opened in 1906.  It was developed in conjunction with the beginning of the trolley line from Schenectady.  The Grandview Hotel, built in 1901 by New York City brewer Jacob Ruppert was the focal point.  The park had several different names throughout its life.  After Fred Dolle acquired the park in 1911, the name was changed to Dolle’s Park.  In 1916 the park came under new management as Palisades Park, and later as Rexford Park.  It closed after the 1933 season, partially due to the shortage of extra spending money caused by the Great Depression, and the rise of the automobile that took people to other destinations.  The park survived two more years as a picnic area for socials and clambakes.

Amusement parks all over the United States were being established in the early 1900s to give city folks a reason to ride the trolley line.  The electric trolley from Schenectady crossed the Mohawk River just west of the present Route 146 bridge (the stone piers of the trolley bridge are still visible).  The bridge was 1,800 feet long and set on 10 piers.  It was considered to be the longest trolley bridge in the world.  It only cost a nickel to ride from Schenectady.  Special park trolleys, called the “Twilight Trolley” were emblazoned with colored lights, a star on the back and a horseshoe on front.

The airplane ride would swing people out over the Mohawk River.  There was also a Whip, Ferris Wheel, a “Razzle Dazzle” (ocean wave machine), and a ride that plunged down a chute into a pool of water.  Other attractions included a Roller Skating Rink, Casino for dancing, Shooting Gallery, Penny Arcade, Bandstand, Ice Cream Parlor, motor launches on the river, a hotel with a bar, fortune tellers and carnival concessions.  Special events at the park would consist of balloon ascensions, fire works, bands, boxing, wrestling, high divers, acrobats, and vaudeville acts.  One popular feature was “Amazing Oliver” and his dog.  They dove together from a high tower into a tub of water.

On July 4, 1907 the crowds at Luna Park were estimated to total between 10,000 and 12,000 people.  A newspaper advertisement for August 4, 1906 advertised Wheelock’s U. S. Carlisle Indian Band at Luna Park, as well as Prof. Bush’s Perilous Ascension in two mammoth balloons.  It indicated that Luna Park was “Schenectady’s Big Pleasure Resort,” and that “Everybody is Going to Luna Now – Follow the Crowd.”  Admission was ten cents, children were free.

In 1935, after the amusement park closed, the owner of the property, the Cyrus W. Rexford estate, decided to raze the existing buildings to avoid paying heavy state, county, and town taxes on unprofitable property.  The land was to be sold for summer camps.  On April 3, 1935, John Millington’s wrecking crews began demolition of the buildings and roller coaster trusses.  The other rides had been sold earlier to surviving amusement parks. The trolleys continued to use the steel bridge at Rexford until they were pulled off the line on December 7, 1941.  The bridge was dismantled in 1942 when steel was necessary to make weapons for World War II.

Today, all that remains of the Rexford Amusement Park are the concrete footings for the roller coaster and other park buildings hidden in overgrown woods.  Some of the large trees that grew throughout the life of the park are still there. Postcard views, photographs and memories tell us of summers long ago when people flocked to Rexford on the electric trolley to enjoy a day of fun, the “Great Escape” of the 1920s.  If the park had only survived!

John Scherer is the Clifton Park Town Historian and also Senior Historian Emeritus at the New York State Museum. He holds a master’s degree in museum studies and American Folk Life from the Cooperstown Graduate Program. John can be reached at This email address is being protected from spambots. You need JavaScript enabled to view it.

More in this category: « Joe Bettys – Patriot and Traitor The Whitney’s of Saratoga: Part One »
back to top