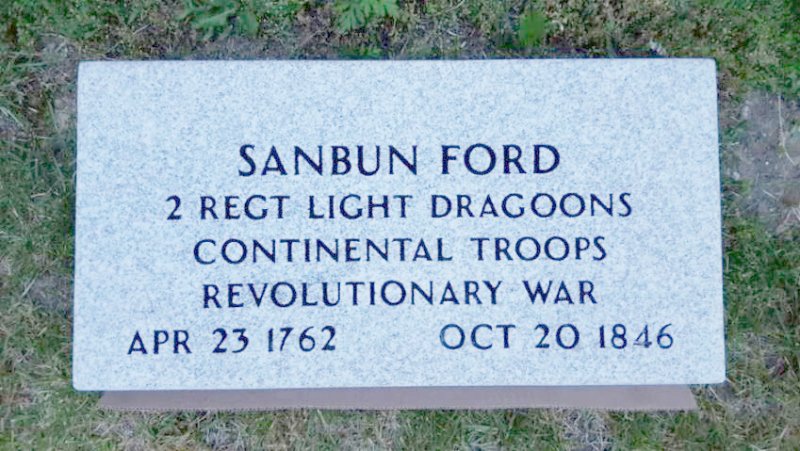 In 1976, as the nation prepared to celebrate its 200th birthday, my parents, Joan and W. Donald Carola of Mechanicville, were already a year into the hunt for records of an elusive ancestor: Sanbun Ford, a founder of the town of Milton.

Trips to local court houses and towns in New England resulted in a Ford family genealogy story, dating back to 1637, that they presented to my mother’s father, Joseph Ford, a retired paper mill electrician from Mechanicville. In 1976, he was invited to Milton’s Founders Day celebration where he and other descendants of the town’s early settlers were welcomed as guests of honor.

Through my parents’ long-ago sleuthing and my own research, our family has learned much more about Sanbun Ford. He was born on April 23, 1762 in Wallingford, CT, the fifth-generation Ford descended from Timothy Ford, an Englishman who arrived in New England circa 1637.

On Dec. 4, 1779, Sanbun enlisted as a private in the 2nd Continental Light Dragoons, known as Sheldon’s Horse for its commander, Col. Elisha Sheldon. There are indications that he joined the Patriot cause to replace a sick older brother. Sanbun would serve five-and-half years with the unit. Nathaniel Bartlett Sylvester’s “History of Saratoga County, New York” has a paragraph describing Sanbun as having served from Bunker Hill to Yorktown, but I’m still working on verifying details of his service.

Sylvester’s book also mentions that Sanbun once captured a “cowboy” by making him place his finger into the barrel of Sanbun’s pistol. Cowboy was the name given to Loyalists who attacked residents and stole livestock and personal possessions in Westchester County, which during the Revolutionary War was the scene of vicious partisan fighting.

We know from Sanbun’s military pension papers, dated June 1837, that he captured a notorious cowboy named Jesse Mills, who was among the 450 Westchester Loyalists sent on two ships to Saint John, New Brunswick in Canada after the war.

A roster of Sanbun’s regiment compiled by Maj. Benjamin Tallmadge shows that he was 5 feet, 3 inches tall with light complexion, gray eyes and brown hair. Like many American veterans of the war, Sanbun was given land by Congress for his service. In 1790, he and his wife, Ada, and their first child, Simeon, settled in Hillsdale in Columbia County, NY.

Two years later, they moved to Milton in Saratoga County. Together, Sanbun and Ada raised nine children, four boys and five girls. At least two sons would fight in the War of 1812. The daughters would go on to marry men with last names Hall, Shepard, McLean, Irish and Lewis.

Grandsons of Sanbun and Ada would fight in the Civil War. Their names can be found on the Civil War monument located at Low and Front streets in the village of Ballston Spa. There is a street named after the Fords, many of whom are buried in the Village Cemetery in Ballston Spa. Later generations of Fords branched out to Mechanicville and Green Island. Others ended up in western New York.

Various documents note that Sanbun settled at Spiers Corners, now West Milton, and later ran a public house near the Rosehill farm of Judge John Thompson where aging fellow Patriots came to dine and reminisce about their wartime service. During the War of 1812, after U.S. victories, Sanbun and the Rev. Elder Langworthy would fire off a cannon they had purchased in Albany.

By 1820, Sanbun was destitute and penniless, living off his Revolutionary War pension and the generosity of fellow members of the local Baptist church. Employed to ring the church bell, he eventually had to give up that duty due to poor eyesight. A religious man, Sanbun called his Bible his side-arm.

Sanbun died at 84 years old on Oct. 20, 1846, a year-and-a-half after his beloved wife Ada. Before he died, he asked that an American flag, his Bible and Continental Army papers be buried with him.

Sanbun was buried in an unmarked grave in the Village Cemetery. A chance meeting with cemetery caretaker Rich Fox led me to the location of the Ford plots. I then went to work acquiring a veteran’s grave marker from the U.S. Department of Veterans Affairs.

The marker was placed on Sanbun’s grave just prior to July 4, 2017. Every Fourth of July, I place two American flags on his final resting place as a tribute to a Patriot once forgotten, now remembered.

Don Carola is a local history buff who was born and raised in Mechanicville. He retired from the state after 33 years from NYSITS as Manager of Information Technology.  Don is a volunteer firefighter for Hillcrest Fire Department. He is also a member of Rev War reenactor unit 2nd Continental Light Dragoons “Sheldon’s Horse” out of Connecticut. Don can be reached at This email address is being protected from spambots. You need JavaScript enabled to view it.

More in this category: « Egbert Ludovicus Viele - Engineer, Soldier, Politician The 1921 Trial of District Attorney Charles Andrus »
back to top