The Bell with a Story to Tell 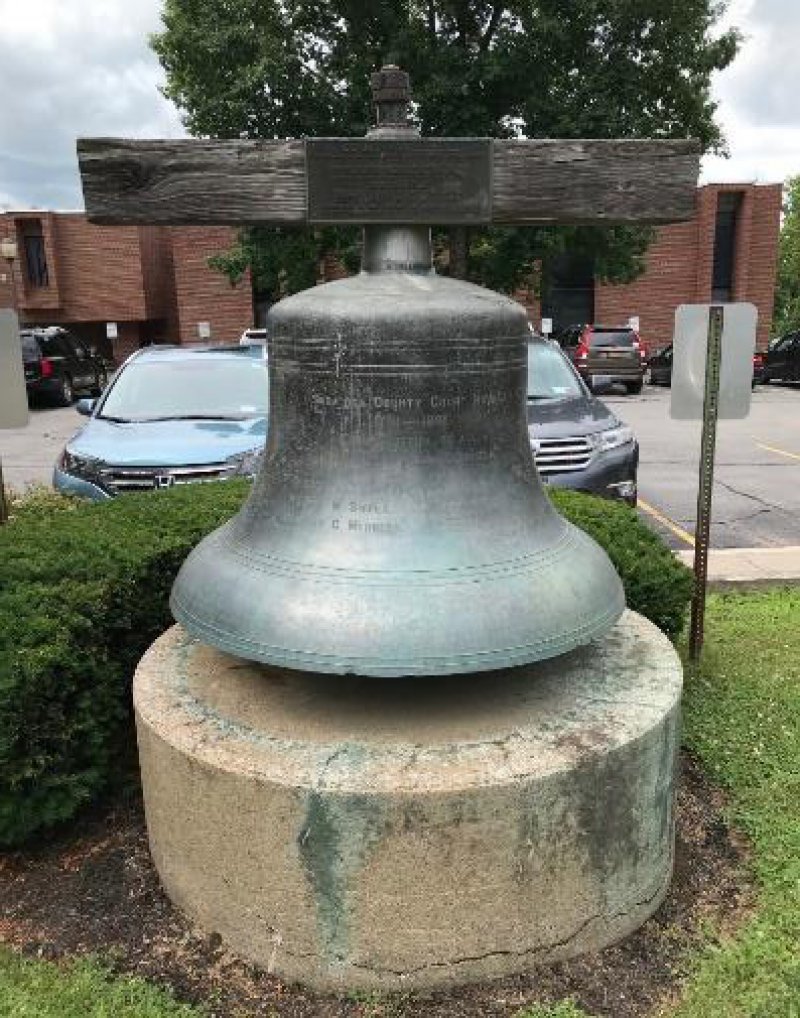 Hundreds of cars drive down McMaster Street in Ballston Spa on a daily basis, but few may notice the beautiful old bell that sits silently on display in front of Building 1 of the Saratoga County Complex.

This bell hung in Saratoga County’s third Courthouse which was erected in 1890 and stood on the location where Building 5 is today (50 West High Street). The bell was purchased from the Clinton H. Meneely Bell Company in Troy, New York for just over $800. The inscription on the exterior reads:

Equal Justice to All

The Latin phrase “Nullus Liber Homo Capiatur” means “Let no free man be seized.” The pealing of the bell was most likely a common background noise in the village, though it seems not everyone was thrilled with its melody. A small mention in The Schuylerville Standard published shortly after the bell was installed noted, “People who have been in the habit of hearing the cheery sound of the old court house bell at every session of court, are now called together by the lugubrious tones of the new bell.” (The Schuylerville Standard October 28, 1891) Like it or not, the bell rang frequently. Besides being rung when court was in session, it was almost certainly used on special occasions and may also have signaled the time.

Thanks to newspaper articles, we know it was also used to alert village residents of danger. In December of 1892, accused murderer Martin Foy used a fake revolver consisting of a tin foil-covered stick to threaten the jailer into handing over the keys. Foy was able to unlock the door and escape onto High Street. According to the Buffalo Currier, “County Clerk Grose, who saw the escape, at once rang an alarm on the courthouse bell and over 100 men started after the fleeing desperado up Remsen Street and across lots to McDonald’s grove, half a mile south of the village, where he attempted to conceal himself in the brush.” (Buffalo Currier, December 16 1892). Thankfully, he was captured in short order. Incidentally, he was found by none other than Tommy C. Luther, well-known proprietor of the White Sulphur Springs Hotel.

On an early morning in August 1894, the courthouse bell rang feverishly to let villagers know that four prisoners had escaped the jail and were loose on the streets of Ballston Spa (Niagara Falls Gazette Aug 17, 1894). They had filed the lock off their cell door and tied bed sheets together to slide down the wall and run away.

Over time, the bell was probably used less and less, being replaced by more modern means of communication and time pieces. By 1961, the stately courthouse building over which the bell hung had begun to show its age and there was concern over the strength of the walls in the bell tower. The county decided to remove the 2,500 pound bell to ensure the safety of the public in making sure the structure did not fail. A contractor from Saratoga Springs was hired to remove the bell and as part of his payment, he would be allowed to keep it for salvage. Ballston Spa residents, nostalgic for the sounds of the old bell, disagreed with this plan and came up with their own solution. The Ballston Spa Village Board paid the salvager $500 to save the bell from being scrapped and decided to display the bell within the village. A fundraiser collected $400 which was to be put toward purchasing a base or pedestal once the location question was settled.

While awaiting that decision, the bell was removed and stored on the second floor of the Ballston Spa Village garage on Thompson Street. In 1968, tragedy struck. On Friday, March 8, the village garage caught fire and was completely destroyed. However, the bell fared far better than the highway equipment stored inside. It was a bit worse for wear but still in one piece.

Then Director of Planning, Larry Gordon, had the bell removed from the rubble at the site of the garage and put plans in motion to finally give the tired old bell a place in the sun at the new Saratoga County Municipal Complex on McMaster Street. Two years later the 1891 courthouse bell was unveiled and dedicated on July 4, 1970. The Ceremony included Town of Charlton Supervisor Fred Hequemburg as Master of Ceremonies and several
other speakers.

This year marks the fifty-first anniversary of the bell’s relocation to McMaster Street where it still resides, despite a massive fire and the threat of the smelter’s pot, thanks to a group of citizens concerned with its preservation.