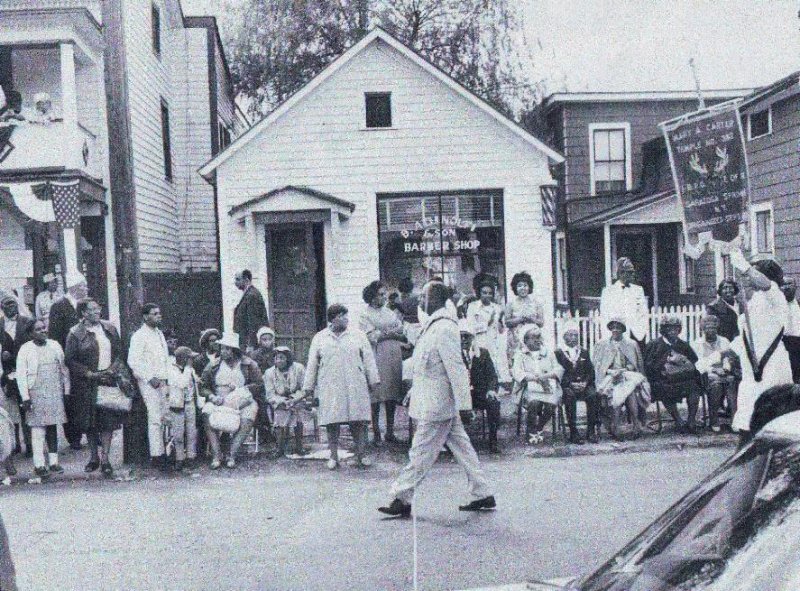 The Improved Benevolent and Protective Order of Elks of the World (IBPOEW) has been active in Saratoga Springs for 96 years.  Known as the “Black Elks” among its membership, the Frederick Allen Lodge No. 609 was chartered August 5, 1925.  The Lodge was named in honor of Frederick Joseph Allen who was one of the first Redcaps employed by the Union Station in Albany.  Mr. Allen worked there for many years, and later became Custodian of Saratoga Springs City Hall.   The Mary A. Carter Temple No. 362, woman’s auxiliary was chartered September 17, 1925.

It is presumed that in the early years, meetings were held in member’s homes as there is no record of the organization in any one location.  The “Ladies Elks Restaurant” is listed at 48 Congress Street in the 1929 city directory.  The Mary A. Carter Temple probably met there, as well as the Frederick Allen Lodge.  Forty-eight Congress Street later became the location of the well-known Golden Grill. The first record of a formal location for the IBPOEW lodge was in 1940 at 101 Congress Street on the northwest corner of East Beekman Street.  From 1942 through 1966, the lodge was located at 88-90 Congress Street, just west of the railroad trestle that once bridged Congress Street.

The Frederick Allen Lodge sponsored the Royal Antlers Junior Herd 326, for younger members.  Ernest Bonner, Exalted Ruler of the junior group, and member of the drill team, remembers practice sessions in the middle of Congress Street and on the third floor of City Hall. The Royal Antlers Junior Herd 326 award-winning drill team, organized and directed by Will Smith, traveled all over the country to perform in various competitions and march in numerous parades.  Mr. Bonner believes that The Drill Team was a very worthwhile activity that provided a focus and outlet for children, teenagers and young adults while also teaching responsibility and teamwork.

A fire on May 7, 1966, destroyed the lodge at 88-90 Congress Street, devastating what little remained of the neighborhood that had already lost so much to urban renewal.

The Frederick Allen Lodge and the Mary A. Carter Temple relocated to 69 Beekman Street, in the building that once housed Fusco’s Restaurant.  The Lodge became increasingly active in the ‘60’s and ‘70’s hosting several national and state conventions. Longtime local resident Mable “Biddie” Anthony fondly remembered events in the early days being held at Convention Hall on Broadway, before it burned in 1965.

In 1973, approximately 4,000 members from the New York State Association and Auxiliary of IBPOEW marched in the annual parade. The parade made its way through the city, from the east side recreation field, to Broadway, continuing on to the Lodge on Beekman Street. Membership in the organization has always been marked by families with multiple members from different generations. In 1969, four generations of the same family were all members of the Elks organization, including Mrs. Z. Mary Evans, Escort of the Mary A. Carter Temple; her daughter, Mrs. Florence Sharp, Vice Daughter Ruler of the Temple; and Mrs. Sharp’s daughter, Mrs. Sherryl J. Moore, Recording Secretary; and Sherryl J’s daughter, Sherryl D. Moore, a member of the Rosebud Class.

Ms. Anita Turner shared her memories of the Annual Grand Elks Ball at the Casino in Congress Park, with Courtney Reid, for the West Side Oral Narrative Project in 1999. Ms. Turner remembers that it was held the day after the Whitney Ball, and the organizers were able to utilize many of the same decorations and supplies.  Because it was held in the height of the summer season, attendees came from many states and Canada.  The Ball always began with the Grand Elks March, with people dressed in their best finery.   Despite the heat of August, many of the women wore mink stoles.  Ms. Turner remembers as a child watching in awe as people marched in. The Casino was always filled to capacity, and they were entertained by famous bands, such as the Cab Calloway Band, and the Duke Ellington Band.  The Ball would continue to the early morning hours often followed by breakfast at Hattie’s, a ritual for many.

Ms. Turner observed “as time got on, like everything else, the older people died out, the younger people did not want to pick up that torch and carry it on as the older people had done.”  Just after the New Year in 1989, the Lodge on Beekman Street was gutted by a fire.  Through hard work and dedication, members were able to repair the damage done to the building and continue to utilize their Beekman Street location.  With 96 years of history and service in Saratoga Springs, the Frederick Allen Lodge No. 609 and the Mary A. Carter Temple No. 362, continue to host dinners and jazz fests while participating in the many neighborhood events of the Beekman Street Arts District.

Read 986 times
More in this category: « The Great Intercollegiate Regatta of 1874 Starks Dake – Not Just about Ice Cream »
back to top