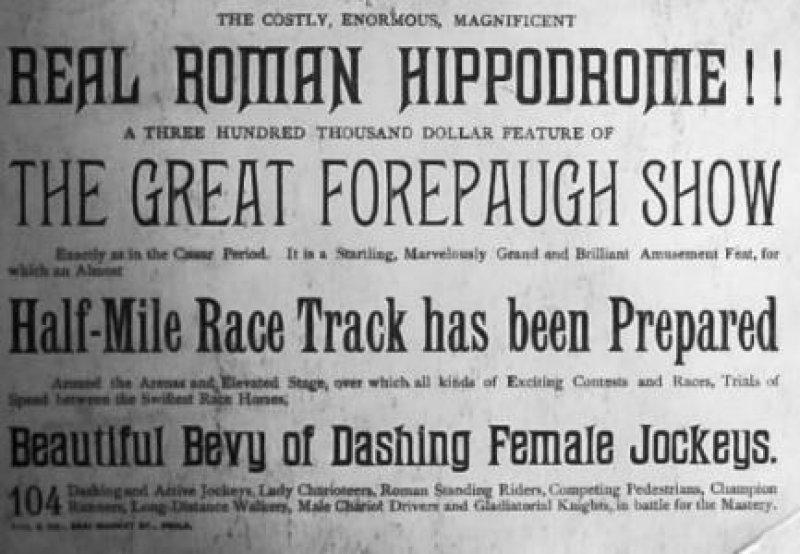 Ask someone the name of a three-ring circus and their response would likely be Ringling Brothers, Barnum & Bailey, or a combination of the two. Ringling Brothers World’s Greatest Shows was established in 1884 and P.T. Barnum’s Great Traveling Museum, Menagerie, Caravan, and Hippodrome had opened in 1871. Predating both was the biggest, most successful, though also the least known of the traveling shows, Adam Forepaugh’s Great All-Feature Show and Wild West Combined, established in 1863.

For over 30 years the Forepaugh show performed 250 times or more each year, the majority of the stops a single day offering two full shows. One example of this exhausting schedule was the itinerary for the 1889 season given in their 26th Annual Tour report. That year the season opened in Philadelphia on April 22nd and closed in October at Alliance, Ohio. In between, they had given performances across thirteen states. The nearly 400 performers and workmen would almost daily assemble and disassemble what was nearly a complete village of massive tents to house not only the show but stables, dressing rooms, maintenance shops, cooking tents, and dining halls that covered eight acres of ground.

In September of 1890, the Forepaugh show came to Saratoga Springs, one stop in a six-month season that took the performers from Binghamton to Syracuse, Glens Falls, Plattsburg, and numerous other communities across the northeast. 1890 was not the first time this show visited the region. In 1883 & 1888 Forepaugh had also toured upstate New York. The 1883 season also included shows at Albany, Binghamton, Ogdensburg, Buffalo, and on Monday, July 23rd Saratoga Springs, a stop between visits to Fishkill and Fort Edward. In Route Book of the Great Forepaugh Show, Circus Hippodrome and Menagerie: Season 1883 they reported having 478 employees, more than 300 horses, and the show and personnel transported in 64 railway cars. During August of the 1888 season, the show had come through Vermont, dipped south to play Saratoga Springs, and then afterward on to Plattsburgh and the north country.

The August 15, 1890 edition of the Mechanicville Mercury carried an advertisement for the Forepaugh show as well as a large article highlighting the upcoming performance titled “A Mammoth Show.” Here the show was proclaimed to be a “novel and dazzling pageant,” that would offer both a Wild West Show depicting Custer’s Last Stand and Eclipse, the flying trapeze horse.

The Forepaugh railcars were moved from show to show by as many as five locomotives, often leaving one town after midnight and arriving at their next stop by early the next morning. The first to leave the train were the hundreds of men and boys who would raise the tents, assemble the bleachers and get everything prepared for the show that would start only a few hours later. Once everything was in place, a parade of the hundreds of performers, musicians, animals in cages, and chariots would move through the main streets of the town. Leading the way was a marching band and Adam Forepaugh’s personal carriage pulled by four black horses. This exhibit of all that the show had to offer was free to watch and hundreds, if not thousands would line the route taking in every detail of the exotic scenes and well-rehearsed acts of the showmen.

The two performances each day, starting at 1 and 7 p.m.,  were the same, the 1889 program giving the opening as an Overture by Prof. Geo. Ganweiler’s Military Band followed by an:

Imposing Spectacular Entrée, In Two Rings, on the Central Stage and Hippodrome Track, exhibiting the principal professional features of the Combined Forepaugh and “Wild West” Shows. Realistic illustrations of life in the romantic wild West.

Immediately following this were 29 acts both in the air and on the ground, sometimes three performances going on at one time under the main tent. After this was a dozen races that included horses, donkeys, elephants, and men. The show concluded with music and dancing ranging from Irish Reels and bagpipes to cowboy bands and music played on hunting horns.

By 1896 the show had a new owner, James A. Bailey, who soon partnered with the Sells Brothers to form the Adam Forepaugh and Sells Brothers Circus. After Bailey’s death in 1905, the Ringling Brothers acquired the circus and continued operation until finally closing the show in 1911.

Read 221 times
More in this category: « Poultry Entrepreneur of Corinth Donald K. Stewart, the Man Behind the Ice Cream »
back to top