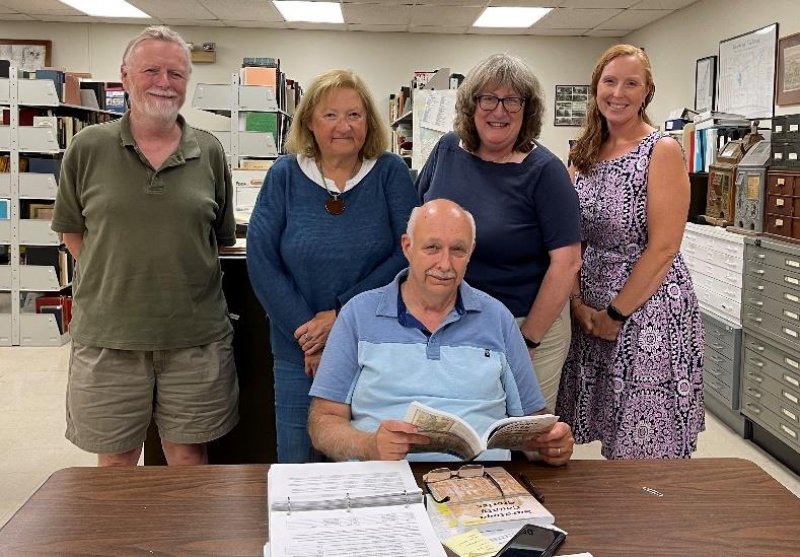 The compilation of “Saratoga County Stories” began in the spring of 2020, during the Covid-19 pandemic, a time when we were all experiencing a major paradigm shift in our daily lives. Among many disruptions, the pandemic halted the activities and programs of libraries, historical societies, and museums, taking away an important aspect of socialization and learning.  Stepping in to help fill that gap, the Saratoga County History Roundtable began weekly publication of articles on local history. They were written by “history buffs,” including municipal historians, independent historians, and people with a passion for history. It is to these authors that we owe a debt of gratitude for sharing their stories with us. Fifty-eight of those stories have now been compiled into a book that will be available for sale and signing beginning at Author Events at Brookside Museum in Ballston Spa on Saturday, October 23 from 2-5 p.m. and at Historic Grooms Tavern in Clifton Park on Sunday, Nov. 7 from 2-4 p.m. Several authors will speak at these events. The book can also be ordered online at brooksidemuseum.org/events/saratoga-county-stories/

Below is an excerpt from the preface of the book.

This book is about those stories taken from the history of Saratoga County, whose first European settlers arrived over 350 years ago. Bounded on three sides by two rivers, the Hudson and the Mohawk, the county’s early history is a tale of three cultures. The Dutch settled along the rivers beginning in the mid-17th century, 100 years before the settlement of the northern and western area by New England Yankees on the eve of the Revolution. The Mohawk tribe of the Iroquois Confederacy preceded the Dutch and the English, leaving a lasting influence on both.

The growth of settlement was slowed by the unique location of the county on the borderland between the competing British and French empires during the colonial period. Still the land of the Mohawks until the Kayaderosseras Patent was opened for settlement in 1770, the county beyond the rivers remained sparsely populated. As New Englanders began migrating west into New York in search of available land, the population swelled. Early settlers were of two minds during the American Revolution, often divided in their allegiance between rebels and loyalists.

The influx of settlers after the war for independence fostered the development of farmlands and small villages. Two of these villages in the center of the county grew because of a natural phenomenon – the mineral springs of Ballston Spa and Saratoga Springs. By the mid-19th century, these villages developed beyond their common beginnings. Saratoga bloomed into a famous resort, touting the healing medicinal powers of the springs, while Ballston became the county seat and relied on the waters of Kayaderosseras Creek for industrial development. River towns like Vischer Ferry, Rexford, Waterford and Mechanicville took advantage of the Erie and Champlain canals to become bustling centers of commerce. The hinterlands developed slowly as pastoral farmland, and more remote and scattered settlements in the northern towns relied on the woodlands for their development.

The recent history of Saratoga County is one of exponential growth, aided by the Adirondack Northway and the development of Tech Valley, which has accelerated the transformation of the county into a land of expanding suburban development bounded by rural areas that recall a former time.

Every county has a unique story, carved out of its location, time and place in the larger context of our country’s story. This compilation tells the unique story of Saratoga County, highlighting the people, places and events that contributed to our history, and by extension, the history of our nation.

Publishing this book has been a labor of love for the Publication Committee of the Saratoga County Historical Society at Brookside Museum. The team of Isobel Connell, Bob Conner, Cindy Corbett, Jim Richmond and Lauren Roberts transformed this concept into a reality with the wonderful support of the contributing authors. The proceeds from sales of this book will benefit the work of the museum in sharing the history of Saratoga County.

Read 398 times
More in this category: « George Herrick West and the (not so) Secret Law and Order League The Gristmill in Galway »
back to top