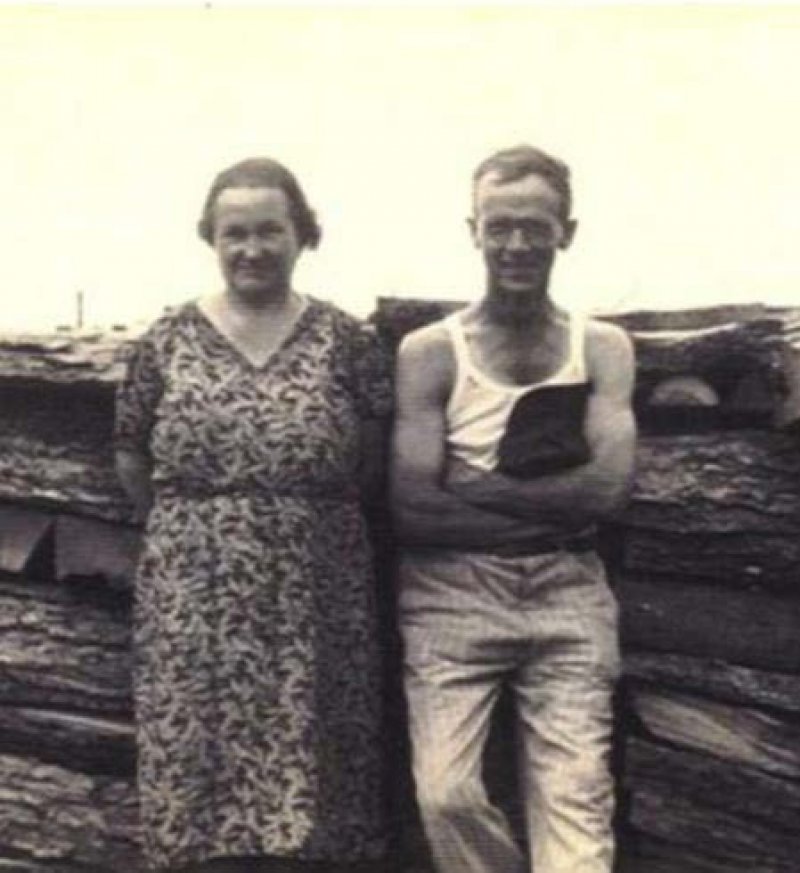 On November 1, 1917, John W. Foles arrived at the home Pearl Marcellus in Rock City Falls seeking romance. It was a fatal mistake. What he hoped would be a carriage ride with a young girl whom he favored would result in his death. Foles was a 26-year-old employee at the Brown Paper Company in Rock City Falls.

Pearl Marcellus was born May 23, 1898, in the Town of Day, Saratoga County. She was daughter of Delbert and Elvira (Colson) Marcellus. By age five, her mother had died in childbirth along with her newborn sister, leaving her father to raise nine children. Pearl was the youngest child. Pearl and her father moved to Rock City Falls shortly after 1915, to a home a short distance north of the main road through town.

The story unfolded in court testimony by Pearl’s friend Margaret Seeley. The fatal day began with Pearl, age seventeen, was visiting her friend Margaret Seeley, age sixteen, at the Big Falls Tavern in Rock City Falls where Margaret and her father were living. Around 1 p.m., the girls left and walked to Pearl’s house. When they reached Pearl’s house, Pearl spent over an hour straightening up the kitchen area and she cleaned out a small stand. She put the contents of one of the drawers on top of the stand, which included a revolver. Then they went upstairs to Pearl’s bedroom to rest.

Around 4 p.m., John Foles arrived at Pearl’s home with his horse and buggy to take her for a ride. He demanded she let him in, and she told him to go away. He broke open the door and went upstairs to get her. Since both girls were undressed, she convinced him to go downstairs. He went back down to the kitchen. When the girls came down, an argument began with swearing and he grabbed her, but she was successful in getting him out of the house and she locked the door. She said to him “John Foles, don’t you come in here, or you’ll get something you won’t like”. Foles then, forced the door open again. Pearl reached for the revolver and fired one shot, that struck Foles in the left temple, killing him.

According to newspaper accounts, the girls left and caught the trolley to Greenfield where they met two married men for a prearranged date. One of the men drove them all in his car to a Saratoga roadhouse. After a few drinks, Pearl went upstairs with one of the men and it was unmentioned what transpired there.

Around 5 p.m. Pearl’s father returned home to find John Foles on the floor, half in the kitchen and half on the front stoop. Pearl was arrested when she and Margaret returned to Rock City Falls around 11 p.m.. The first thing Pearl said was “I didn’t mean to shoot him. I shot him because he wouldn’t get out and let me alone. I just wanted to scare him.” After her arrest she gave a full confession, and her friend Margaret collaborated the story.

On January 10, 1918, Pearl was indicted by a Grand Jury for manslaughter in the first degree in the death of John Foles. She pled “not guilty” to the charge. Her trial began on February 13, 1918. She did not testify and was convicted the next day after only 2 hours of jury deliberation. She was found guilty of manslaughter in the second degree and sent to Auburn State Prison on February 24, 1918, for not less than four years.

On February 21, 1918, a Notice of Appeal was filed by her attorney Clarence Kilmer on the grounds that improper testimony had been admitted into evidence. The Supreme Court of Saratoga County heard the case on November 13, 1918 and ruled that her actions after the killing prejudiced the jury against her. Her conviction was reversed, and a new trial was ordered.

The new trial was held in the Supreme Court on November 27, 1918. She was again found guilty of manslaughter in the second degree and sentenced to no less than four years at the Auburn State Prison. She served out her term, remaining in prison until September 20, 1922.

After her release she went to live in Athol, Town of Thurman, Warren County. In 1923, she married John Eldridge and he died the same year from injuries sustained when his car collided with a train in Thurman.

Karen Staulters has been the Milton town historian since 2018, a founding member of Heritage Hunters of Saratoga County, and former archivist for the Upper New York Conference of the United Methodist Church. Karen is currently developing a Forgotten Crossroads video of Rock City Falls with the support of the Saratoga County History Center. She can be reach at This email address is being protected from spambots. You need JavaScript enabled to view it..