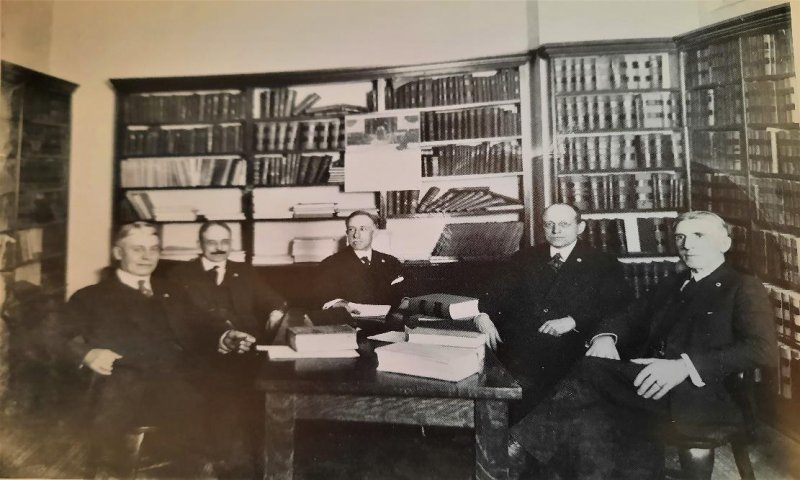 On July 9, 1890 Walter P. Butler married Mary Ashman Kilmer from a prominent local family. She was born in Rock City Falls, December 2, 1867, a daughter of Clarence Beekman Kilmer and Bessie Broughton. Her paternal grandfather, Chauncey Kilmer, an early Rock City Falls settler, was prominent in the paper mill industry which once flourished there. Clarence Kilmer was the president of the Empire Spring Company which eventually merged with the Congress Spring Company. Subsequently, the merged entity included the Granger’s glassworks located near Lake Desolation. The newly formed company relocated its glass factory along the railroad tracks in Congressville, on Empire and Congress Avenues in Saratoga Springs.

Mary’s great grandfather, Peter Kilmer, moved to Pages Corners, near Middle Grove, from the Dutch settlement near Kinderhook. Mary attended Mrs. Young’s Seminary at West Milton, as well as Public School No. 4, Saratoga Springs, before graduating from Temple Grove Seminary. Mrs. Butler was a member of the Board of Saratoga Hospital and served on the original Board of Trustees of Skidmore School of Arts, now Skidmore College. She also served as manager of the Hawley Home for Children.

Walter Butler was originally associated with the firm of Pond, French, and Brackett in Saratoga Springs. In 1897, Butler and Clarence B. Kilmer, his brother-in-law, formed their own partnership. Although the names in the practice changed with various associates over the years, Kilmer remained in the practice with Butler.

One of Butler’s more important cases was LaRepublique Francaise against the Vichy Spring Company, of Saratoga Springs, in which the Republic of France endeavored to enjoin the Vichy Company from using that name. This case in which Mr. Butler was counsel for the defense, was taken to the Supreme Court of the United States where in 1903 it was decided in favor of the Vichy Company of Saratoga Springs New York. In addition to that landmark case, Butler represented the New York State Comptroller in inheritance tax matters for many years.

For many decades the citizens of the Village and Town of Saratoga Springs hoped to secure a more economic and efficient form of government. Finally in 1915 the Saratoga Springs Businessmen’s Association who labored earnestly to bring this about, petitioned the State Legislature. The Town and Village were incorporated to become the City of Saratoga Springs on April 7, 1915 as a result of the Charter Bill, Chapter 229 of the Laws of New York. The Charter bill also gave the city the commission form of government requiring a mayor and four commissioners each with a single vote.

Among Butler’s civic activities were active participation in the American Red Cross, the Presbyterian Church, the Saratoga Lodge of Elks, and membership in the American, New York State and Saratoga County Bar Associations. He was a life member of the Commercial Law League of America. Butler, along with James H. King and Dr. N. C. Powers, organized the Public School Baseball League to benefit the youth of Saratoga Springs.

Mrs. Mary Ashman Kilmer Butler died December, 1938, followed by her husband on January 7, 1942. Mr. and Mrs. Butler are buried in Greenridge Cemetery. Many tributes to Mr. Butler were shared in the local newspaper on January 8, 1942. Carleton J. King, local lawyer and future Congressman, wrote “In the death of Walter P. Butler, the nation has lost one of its finest citizens, this city one of its best leaders, neighbors and civic workers, his family a good, industrious and model father and I, one of my dearest friends and valued advisors. The city has lost its most outstanding citizen.”

Mary Ann Fitzgerald is the Saratoga Springs City Historian and Co-founder of the West Side Oral Narrative Project. Mary Ann can be reached at [email protected] springs.org

More in this category: « Murder in Rock City Falls A History of Time - Father Time (Zones): Charles Ferdinand Dowd »
back to top