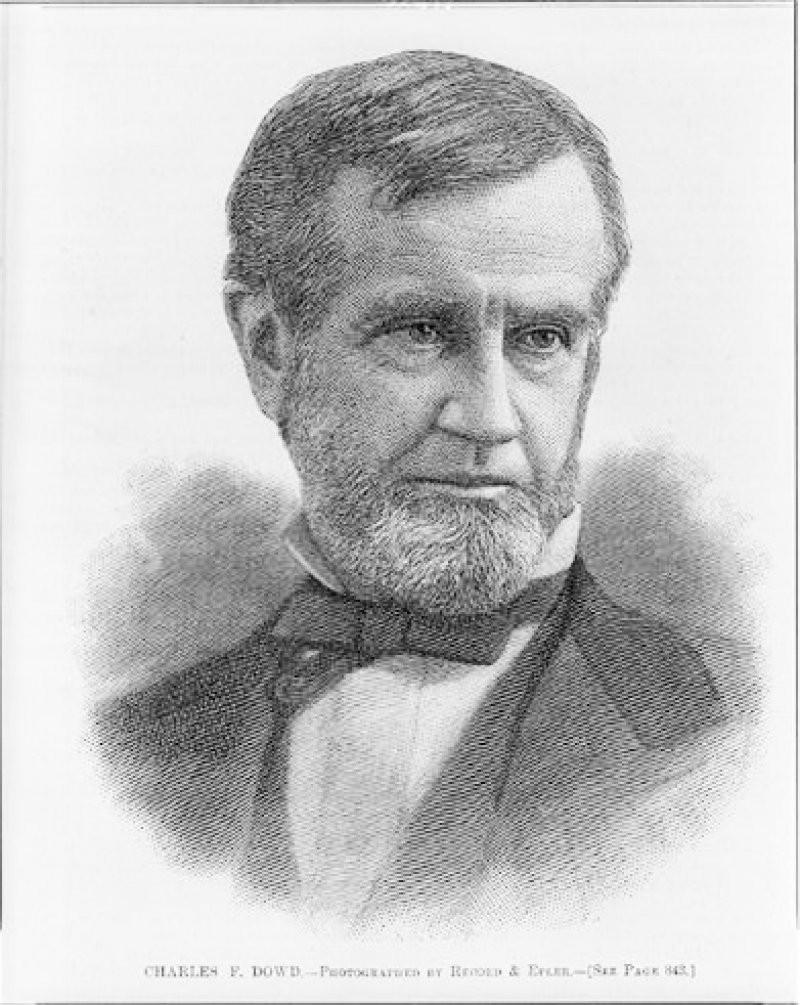 Time is often referred to as a human construct, but time zones are definitely man-made, and they have a direct connection to Charles Dowd of Saratoga Springs and the month of November, when standard time began in 1883, and 21 years later when time ran out for Charles.

Local time once was set by the noon mark. Noon was defined to be the time at which the sun was directly overhead. This meant, for every approximately 69 miles travelled west, the moment of noon differed by four minutes. For example, the clocks in Boston were set about three minutes ahead of clocks in Worcester, MA.

This was all well and good, so long as one never left home, or only travelled north and south, but the idea of long-distance travel became more accessible with the advent of the railroads. On May 10, 1869, Leland Stanford, the president of the Central Pacific Railroad Company of California, ceremonially tapped in the “Last Spike” at Promontory Summit, Utah, and the era of trans-continental rail travel across the United States had begun. But did the trains run on time then? And if they did, who was to say, because whose time did they run on?

By 1879, there were about 500 railroad companies through the country. These companies defined their own time system, based on the local time of one of the cities in their region. To travel just from Portland, Maine, to Buffalo, New York, took passengers through four different time systems. Something had to change.

In 1868, Charles Ferdinand Dowd, a Yale graduate from Madison, Connecticut, together with his wife, Harriet Miriam North, moved from North Granville to Saratoga Springs where they established the Temple Grove Ladies Seminary. He put his mind to the problem of trains and timetables. He did consider the uniform national time, as adopted in England, but studying solar times for 8000 locations across the United States revealed time differences of up to 4 hours, so this was impractical. In October 1869, Dowd presented a plan to the Convention of Railroad Superintendents, and, following their approval, in 1870, published a pamphlet entitled “System of National Time for Rail-Roads”. In it he proposed 4 regions across the country, with “Washington Time” the standard time for Atlantic States. (He later modified this to start at the 75th meridian west of Greenwich, to stop arguments over Washington or New York). Similarly, the Mississippi Valley States would be one hour behind Washington Time, Rocky Mountain States two hours behind and Pacific States three hours behind. These divisions were based on approximately 15 degrees of longitude, and within each division, the time would be uniform.

Unsurprisingly, there was reluctance to adopt the suggestion. Railway companies and their associated cities were unwilling to cooperate. Albany, New York City and Montreal were only different by a minute, but all insisted on keeping their own times. However, Dowd persisted with promoting his ideas and, on November 18th, 1883, at 9am, the regulator clock at the Western Union Telegraph System building in New York City was stopped. After precisely three minutes and 58.38 seconds the clock was restarted, and this was the birth of Eastern Standard Time. During the day, a similar event happened at three other locations across the country to start Central, Mountain Standard and Pacific Times.

Charles Dowd earned his PhD from New York University in 1888, and was made a Fellow of the Royal Society of Science, Letters and Arts of London in the same year, but continued working as principal of Temple Grove until his retirement in 1898. Temple Grove was then led by his son, Franklin D. Dowd, until it closed in 1900. In 1903 the buildings were sold to Mrs. Lucy Skidmore Scribner, and ultimately became part of Skidmore College.

Tragically, at approximately 5:30 pm on Saturday, November 12th, 1904, Dr. Dowd was killed by the southbound train No. 6 at the North Broadway crossing of the Delaware and Hudson Railroad. According to newspaper reports, his body was thrown thirty feet and was “mangled almost beyond recognition”. The coroner, Dr. Richard H. McCarthy, in his last act before retiring at the end of 1904, declared the railroad company “wholly responsible for the death of the said Charles F. Dowd,” as the crossing was ungated and dangerous with extremely poor visibility for pedestrians.

A spherical sun dial honoring Dr. Dowd can be found on Church Street in Saratoga Springs, behind the Adirondack Trust Co.

Isobel Connell is a native of the United Kingdom and a retired engineer. She currently is a volunteer in the research room at Brookside Museum and a trustee at the Saratoga County History Center at Brookside Museum. Isobel can be reached at This email address is being protected from spambots. You need JavaScript enabled to view it.

More in this category: « Walter Butler: First Mayor of Saratoga Springs The Tale of a Headless Rooster »
back to top