The Mystery of the Wood-Mann Cemetery Monuments 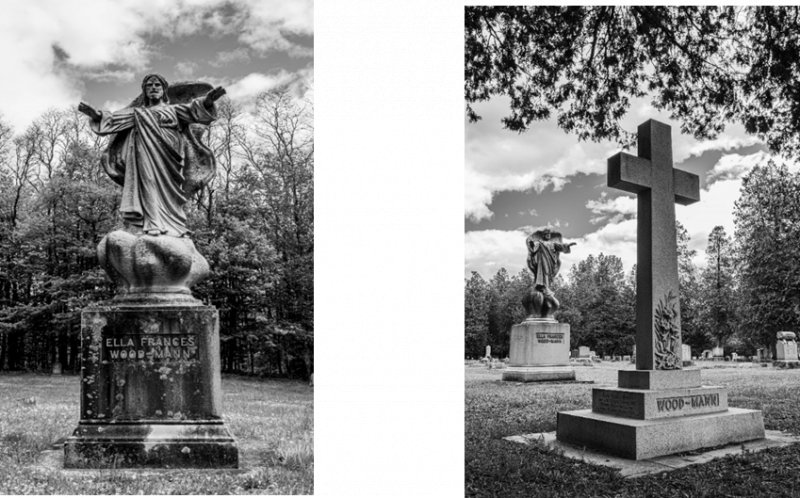 Along Plummer Road in the town of Milton sits the Powell-Wiswall Cemetery, a peaceful rural cemetery where local residents have been laid to rest since the early 1800s. Standing like a sentinel over it all is a large statue of Christ. On two sides are engraved the names Ella Frances Wood-Mann and her husband Enos Rogers Mann. This monument sits adjacent to Wood family plots, where over the years Ella’s parents and other family members have been laid to rest.

If you were one who routinely explores local cemeteries, you might have noticed another similar statue standing near the center of the Ballston Spa Village Cemetery. A closer inspection will prove that they are the same in shape, size, and engraving.

This story begins with the birth of Enos Mann in 1840. Enos was the son of John Mann, a carpenter residing in Willow Glen, a hamlet in the town of Stillwater, Saratoga County. The Mann’s family tree can be traced back to their ancestor Constant Southworth, a member of the Mayflower colony. Enos’s early education was in the rural school in Willow Glen, and from there he went on to the Ballston Spa Institute. At the age of 19, he began as a teacher in district schools, a career he would follow for the next fifteen years.  After four years of study under William T. Odell of Ballston Spa and later Jacob W. Miler of Cohoes, he was admitted to the New York State Bar in 1864.

For some reason that is never revealed, Enos did not pursue a legal career, and in December of 1865 he struck out on a new endeavor, partnering with the town of Milton resident and newspaper publisher Sanford H. Curtis to establish the Ballston Democrat newspaper in the village of Ballston Spa. Although their ownership in the paper only lasted a year, Enos Rogers Mann continued for the rest of his life in newspaper work. Over the years he was employed by numerous papers both locally and statewide, including the Albany Argus, Saratogian, and the New York Tribune. His most lasting achievement was the book on legal history entitled “The Bench and Bar of Saratoga County.” In 1905 Enos Rogers Mann died of heart disease at the age of 64 and was laid to rest in Ballston Spa Village Cemetery.

As his death was unexpected, his wife, Ella Frances Wood-Mann purchased six cemetery plots in the Ballston Spa Village Cemetery as part of his funeral arrangements. Five years later, she purchased four lots in the Powell Wiswall Cemetery from the Powell-Wiswall Cemetery Association, choosing plots close to where her parents were buried. Ella Frances Wood, born in 1857, was the daughter of Ballston Spa farmer Cyrus Wood and his wife Rebecca. Ella’s grandfather David and his wife Dorothy, settled on Middleline Road in the Town of Ballston (now Milton) in 1775 purchasing property not far from the current Powell-Wiswall Cemetery. In 1879, Ella, 22 years old and a graduate of Emma Willard School in Troy, New York, married Enos Rogers Mann. After their marriage, she took the surname Wood-Mann.

Two years before Ella Frances Wood-Mann passed away in September of 1936 at the age of 85, she had made a will that gave clear direction in how her estate should be distributed. When the will was made public during probate, it made front-page news in the September 23, 1936, Ballston Spa Daily Journal. The large bold headline was enough to capture any readers’ attention: Mrs. Ella Frances Wood-Mann Leaves Estate for Monuments and Bells.

The Bethesda Episcopal Church of Saratoga Springs was to be the recipient of ten thousand dollars for bells that were to be placed in the tower, with additional bells to be purchased in memory of Ella’s family. On November 24, 1946, the Carillion Bells were dedicated in the memory of her parents, Cyrus & Rebecca Wood, and their children, Lousia Rebecca, Sarah Esther, and Ella Francis.

The most notable and lasting part of Enos Mann & Ella Wood-Mann’s legacy were the three monuments that were to be placed on the cemetery plots that Ella had purchased many years earlier. In her will, Ella had set aside over $23,000 for the creation of these cut and sculpted memorials. Two of the monuments were to be sculptures and the other a large cross on a granite base. One of the sculptured monuments was to be placed in the Powell-Wiswall Cemetery and the other two, a sculpture and a cross, were to stand on cemetery plots in the Ballston Spa Village Cemetery.

Having covered all the details for the construction and placement of the monuments, Ella next addressed the issue of future maintenance. In her will, she set aside seven thousand dollars for the Bethesda Church to provide perpetual care of the burial plots at both cemeteries as well as the two sculptures and the cross. Along with the normal care, she also required that every five years an examination was to be made of the monuments and any necessary repairs be made.

The prominent Wood-Mann monument in the Powell-Wiswall Cemetery in Milton has confused some concerning where Enos and Ella were buried. To this day the website findagrave.com shows Ella’s gravesite as being in this cemetery, though interment records from the Ballston Spa Village Cemetery clearly show that both she and her husband are buried there.

Read 501 times
More in this category: « History Fisticuffs at the Filling Station The Saratoga Electric Railway »
back to top