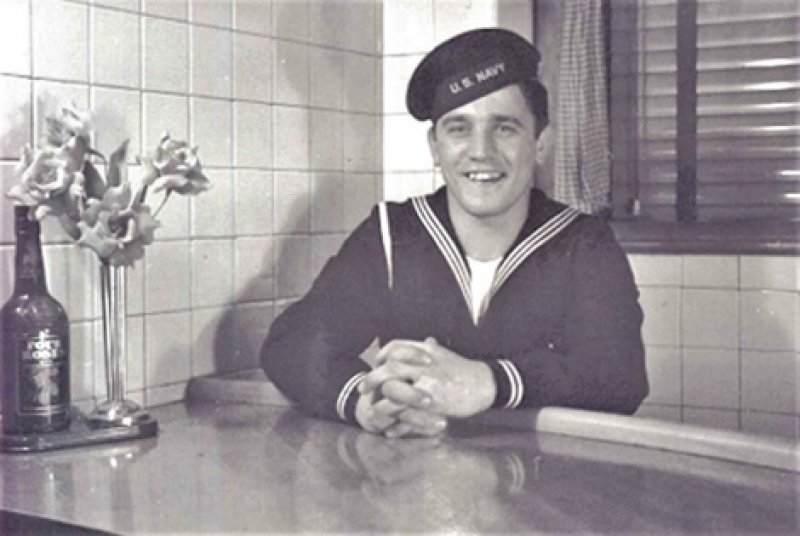 On May 8, 1945, Nazi Germany surrendered to Allied forces, ending World War II in Europe. Less than four months later, on Sept. 2, Japan formally surrendered aboard the USS Missouri anchored in Tokyo Bay, bringing history’s most destructive conflict to an end.

More than 16 million Americans served in the U.S. military during the war, including several thousand from Saratoga County. Many of those local veterans hailed from the city of Mechanicville, where a unique artifact from their wartime service survives to this day.

In 1942, not long after Japan’s surprise attack on Pearl Harbor brought the U.S. into the war, restaurant owner and photography buff Charles Siciliano Sr. started snapping portraits of local servicemen in uniform when they stopped at his restaurant on Warsaw Avenue in what was then the heart of Mechanicville’s Italian American neighborhood.

Siciliano’s Restaurant was a popular spot in the 1940s, known for its clams, Italian food and live dance music on weekends. “It was standing room only,” Charles Siciliano Jr., a boy when WWII started, told me in November 2000 for a story I wrote on his father’s photo collection while working as a reporter for The Associated Press in Albany.

As the war progressed and more Mechanicville men went into the service, the elder Siciliano, known to everyone as Charlie, turned his photography hobby into a local tradition. Soon, servicemen home on leave were being told, “Go up to Charlie’s place and have your picture taken.” Siciliano snapped every photo in the same spot: in the corner of the restaurant’s bar, where the white tile walls and a window with the shade closed provided a good background for the black-and-while portraits. Most men sat posed with their right arm resting on the bar, many with drink in hand, with a vase with flowers or a liquor bottle at their bent elbow. Siciliano developed and printed the 3-inch-by-3-inch photos himself, then framed them in groups of 25 and hung them throughout the restaurant. By the time WWII ended, hundreds of photos of local veterans — including a handful of women — decorated Siciliano’s walls. Not all of them were from Mechanicville. Servicemen from Stillwater, Waterford, Ballston Spa and Saratoga Springs had their photos taken by Siciliano, as did some veterans from neighboring Washington and Rensselaer counties.

Every branch of the U.S. military is represented in the photos, and the people smiling for Siciliano’s camera saw action in every theater of the war, from the skies over Europe to remote Pacific islands, from the beaches of Normandy to the jungles of Burma.

Among the veterans in the photo collection are: Hawley Waldron Sr. of Mechanicville, a Marine who fought at Saipan and Iwo Jima. David Catallo of Waterford, a Navy corpsman wounded at Omaha Beach in Normandy on D-Day.

Chris Sgambati Mechanicville’s 30-year representative on the Saratoga County Board of Supervisors, a sailor who served in the Pacific Theater, including the 1944-45 Philippines campaign.

William Grey of Mechanicville, an Army Air Forces navigator who flew 50 missions in Europe, where he survived being shot down on his 33rd mission. Carmine DeCrescente Sr., of Mechanicville, who forged his parents’ signature at 17 to enlist in the Navy and served in the Pacific aboard the USS Texas.

DeCrescente, patriarch of the family-owned beer distributing company based in Mechanicville, passed away last Dec. 16 at 94. “Carm” was an accomplished clarinetist as a teen and was a regular performer at Siciliano’s before joining the Navy. He was likely among the last surviving WWII veterans whose photos are in the Siciliano collection, if not the last overall.

Siciliano also took photos of local servicemen during the Korean War, but the vast majority of the more than 700 snapshots from his collection are from WWII. He sold the business in the late 1970s to Frank Costanzo, who inherited the hundreds of framed photos. Costanzo had them remounted in eight larger frames, then took the collection with him when he relocated his business to the town of Waterford. There, the frames covered the walls in the entrance for years before being donated to the Mechanicville Public Library.

The library is also home to all the negatives from the original photos, donated by Charles Jr., a retired Saratoga Springs school district administrator. The library has digitized the Siciliano collection on its website: www.flickr.com/photos/mechanicvilledistpublibrary/sets/72157602435034007/

While taking photos of hometown servicemen and displaying them in bars, post offices, city halls and other public places was common during WWII, few if any of those collections are known to have survived the intervening 80 years, which makes Mechanicville’s collection unique, according to historians I interviewed for the two stories I wrote for the AP on the Siciliano photos, the second one written in September 2015 for the 70th anniversary of WWII’s end.

The National World War II Museum is home to more than 100,000 artifacts, including photo collections. Yes, it’s the quality, size and longevity of the Siciliano collection that make it “a local history treasure trove” and “completely unique” among known WWII collections, Kimberly Guise, a curator at the New Orleans museum, told me for that 2015 AP story.

Chris Carola is a former Albany-based Associated Press reporter who lives in Saratoga Springs. He can be reached at This email address is being protected from spambots. You need JavaScript enabled to view it.

More in this category: « The Deer of Congress Park Ellis Corners – 200 Years Past »
back to top