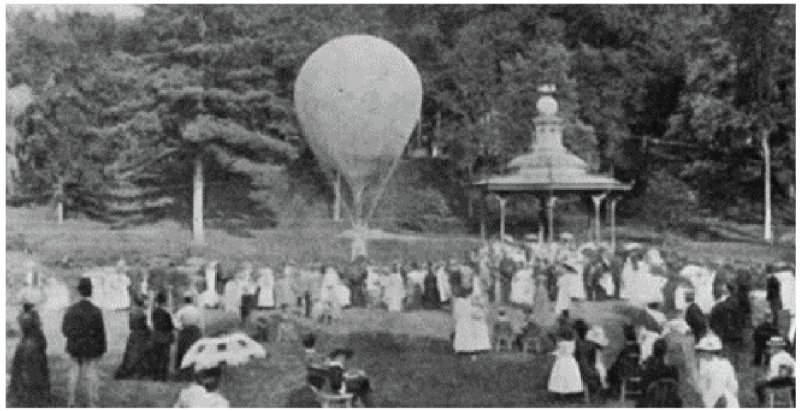 It was a quiet September afternoon at Saratoga Springs’ Grand Union Hotel, with families and small groups gathering to relax and be seen by Saratoga’s high society. As the clock struck 4:30, a hush fell over the hotel’s piazza and every eye was drawn across Broadway to Congress Spring Park where a huge net shrouded sphere slowly rose above the trees. When the giant ball had cleared the treetops, hanging below it was a small figure standing suspended in an open wire cage waving a handkerchief to the onlookers below. The crowd that day in 1884 witnessed a gas-filled balloon ascension by female aeronaut Carlotta Myers.

The balloon that carried Carlotta that day was called Zephyr, the Greek god of the west wind, and true to its name it quickly rose five hundred feet and was carried away on a gentle breeze. To find stronger currents, Carlotta dropped part of her ballast and the balloon quickly took her to two thousand feet where she turned northeast towards the village of Gansevoort. Fortunately, Carlotta and Zephyr were no longer in view by the crowds in the park as her graceful trip soon took a near-fatal turn.

From her vantage point high above the countryside, Carlotta chose a likely spot to set down, released some of the gas, and dropped rapidly towards the earth. As she touched down, she called on some boys who had been playing nearby to grasp the basket and keep it from rising so she could climb off. Just as two of the young men grabbed the basket a sudden squall hit, taking the balloon, Carlotta, and the boys on a wild ride into the air. They quickly flew at a height of fifty feet for nearly a mile, with the balloon twisting in the wind and the boys holding on for dear life. As the balloon neared the tree line, Carlotta pulled a rope that opened the balloon from top to bottom and it quickly dropped to the ground. Though the balloon was a total loss, Carlotta had succeeded in bringing everyone safely back to earth unhurt. The two boys quickly rebounded from the potentially fatal incident, and soon after were heard to say that it was “lots of fun.”

This was not the first time that Carlotta had faced death during a balloon ride over Saratoga. Two years before she had again taken off from Congress Spring Park in the balloon Aerial, on a flight that was later described as her eighth ascension. Picking up a northern breeze soon after taking off, Carlotta was pushed to what her barometer registered as 12,000 feet, with her breath coming out like steam in the rarefied air. The wind then shifted setting her balloon pitching and whirling as it pushed her back in the direction of Saratoga Springs. To bring herself down, she began to release gas, but the valve stuck open, and the balloon quickly dropped from the sky. As the balloon came sweeping down it lodged in a large tree on Hosea Baker’s farm six miles east of Saratoga. Her rescuers were forced to chop down the tree, dropping Carlotta and the balloon to the ground, where she landed with only minor scratches. In her pamphlet, Aerial Adventures of Carlotta, Sky-Larking in Cloudland, she recalled this flight as being the first time that she sensed danger while aloft in a balloon. She went on to graphically describe this fearful experience:

The Aerial was crazy, surely. It paid no heed to my movements in opposition to the oscillations, by continually threatening to whirl over and jerk itself free from the basket, while I formed as helpless an appendage as the cracker of a whip. It seems as if some giant of the air had resented our intrusion of his domains, and, clutching the balloon with invisible fingers, had administered a most tremendous shaking which threatened to dislocate its members and hurl all in fragments earthward.

Carlotta, whose maiden name was Mary Breed Hawley, had married Carl Myers, an itinerant, self-taught inventor in 1871. Soon after their marriage, Carl’s interest turned to the manufacture and navigation of balloons. Seeing the success of her husband as he took his balloons aloft, Mary decided to try her hand at flight and soon found that she had a natural ability to both operate and navigate an airship. Her first public ascent was held in Little Falls, New York on July 4th, 1880. In promoting the event, she announced herself as “Carlotta, the Lady Aeronaut,” a stage name that she would carry throughout her 10-year ballooning career. Her husband Carl Myers was as much a showman as an inventor, often adding theatrical elements to the balloon launches such as Carlotta in the disguise of an old lady who would “accidentally” be taken up in the balloon.

In 1881, Mary “Carlotta” Myers gave birth to a daughter, Elizabeth, who was soon given the stage name, Aerial. At the age of three, she made her first balloon ascent, on a trip with her mother over Congress Spring Park. In 1903, Aerial would carry on her mother’s legacy of flight, making exhibition flights at the St. Louis Exposition using a pedal-powered dirigible invented by her father. The flights were made inside of a large auditorium, with Aerial so adept at controlling the machine that she could maneuver it around the hall without touching the walls or roof.

Carlotta retired from public performances in 1890, having made her mark regionally for her countless ascents, as well as being the first woman in America to make a solo flight in her own balloon.

Dave Waite is a resident of Blue Corners, Saratoga County and has written many articles on upstate New York history, including several in the recently published book, Saratoga County Stories. Dave can be reached at This email address is being protected from spambots. You need JavaScript enabled to view it.

Read 1541 times
More in this category: « Rebirth of Elegance: Saratoga YMCA The Good Old Summer Time at Vischer Ferry »
back to top