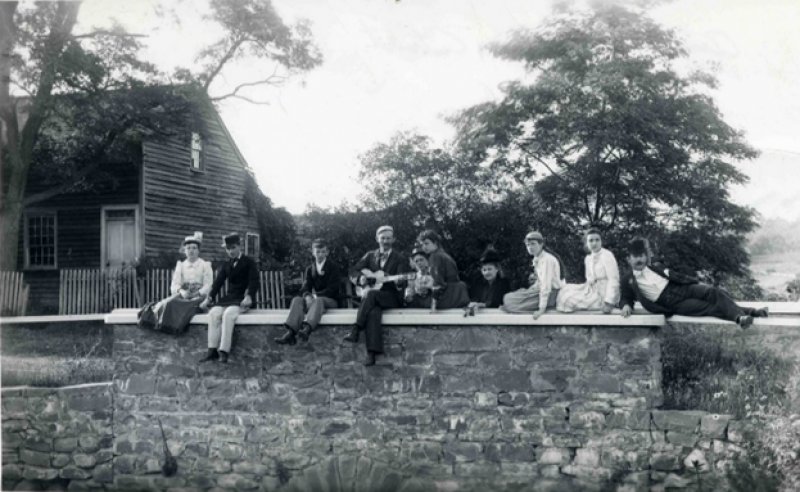 Picnickers on the bridge over the sluice-way to the Vischer Mill, Vischer Ferry, July 4, 1891. Photo provided by The Saratoga County History Roundtable.

Now that summer is here and warmer weather prompts us out of doors, we begin to plan picnics and side trips to the lakes and mountains.  At the turn of the nineteenth to twentieth century, that magical year 1900 when life seemed slower and carefree, Vischer Ferry was the destination of many area picnickers and tourists.

People came from Schenectady, Albany, Troy, Cohoes and even New York City to spend a day, a week, a month or the complete summer in the healthful climate and beautiful surroundings of Vischer Ferry.  As quiet 120 years ago as it is today, the village was an ideal spot to escape from the noise and turmoil of the city.

There were a number of ways that a visitor could arrive at Vischer Ferry.  Many would drive their carriages or autos over the Troy and Schenectady Road (Route 7) to Rosendale Road which led down to the river where a ferry scow was in readiness to convey the visitor to Vischer Ferry on the other side of the river.  Another popular way was by train to the Niskayuna Station from which it was necessary to walk or hire a vehicle to the crossing at the river.  This restored Niskayuna train station remains along the Colonie-Niskayuna Bike path which now follows the railroad route.

The trolley from Schenectady to Troy paralleled the train tracks a short distance above Niskayuna, and still other visitors came by this route.  A toll bridge was built across the Mohawk River at Vischer Ferry in 1900, and until the bridge was destroyed by ice flows two years later, picnickers could come by this route rather than waiting for the ferry.  In later years there was an autobus from Schenectady direct to Vischer Ferry. This was probably the quickest way of reaching the town from the west.

The fun way of visiting Vischer Ferry was on the “Kittie West,” a small steamer, and come down the Erie Canal from Schenectady.  Many families, complete with picnic basket and blanket arrived at the village in this manner to spend a pleasant day.  The large Swiss music box that provided music for the passengers of the “Kittie West” is now at the Schenectady Historical Society.

Those vacationers who were going to spend some time at Vischer Ferry could stay at the hotel run by George F. Smith.  It is said that he generally had a full house all summer.  This hotel was built in 1798 and was a landmark in the village until it burned in 1947.  Today the Vischer Ferry fire house occupies the site of the hotel.  Another place where many could spend their summer vacation was at the residence of Mrs. W. H. Van Vranken.  This was an 1847 farmhouse remodeled in the 1880s to accommodate boarders.  It was located about 1/2 mile east of the village.  Mrs. Van Vranken had a reputation for her fine meals. The house still stands as a private home on Riverview Road.  Recently a historic marker was placed by the road in front of the house.

Surviving from this period of Vischer Ferry’s varied history are numerous post card views of the village that were purchased by vacationers and mailed to friends back home.  No less interesting are the messages written on these cards.  Many of the postcard views were taken by Parker Goodfellow as he made his way around the village on his motorcycle, which can be spotted in some of the views.

Snapshots of picnickers enjoying themselves by the side of the village mill pond, and other photographs attest to the resort atmosphere of 120 years ago.  A souvenir booklet and guide extolled the wonders and beauties of Vischer Ferry.  This booklet entitled “Beautiful Vischer Ferry” was printed in about 1907 by “A lover and admirer of V. Ferry.”  It is a must for anyone interested in local history.

Fortunately, Vischer Ferry, made a National Historic District in 1975, has retained many characteristics of its past.  Even today picnickers and tourists enjoy the same atmosphere at Vischer Ferry as was enjoyed by their parents and grandparents.  You don’t even need to bring a picnic.  The restored Vischer Ferry General Store plays host to those who come for breakfast or lunch.  The hotel and boarding house are perhaps gone, but one has only to stroll down the old Erie Canal towpath on a warm Saturday afternoon, count the cars driving through the village on a nice Sunday, or note the number of bicyclists and walkers, to realize that the appeal of Vischer Ferry has not diminished.  If there is any doubt, just ask a stranger visiting the place!

More in this category: « Carlotta Pierces the Clouds Over Congress Spring Park Rebirth of Elegance: Saratoga Performing Arts Center »
back to top