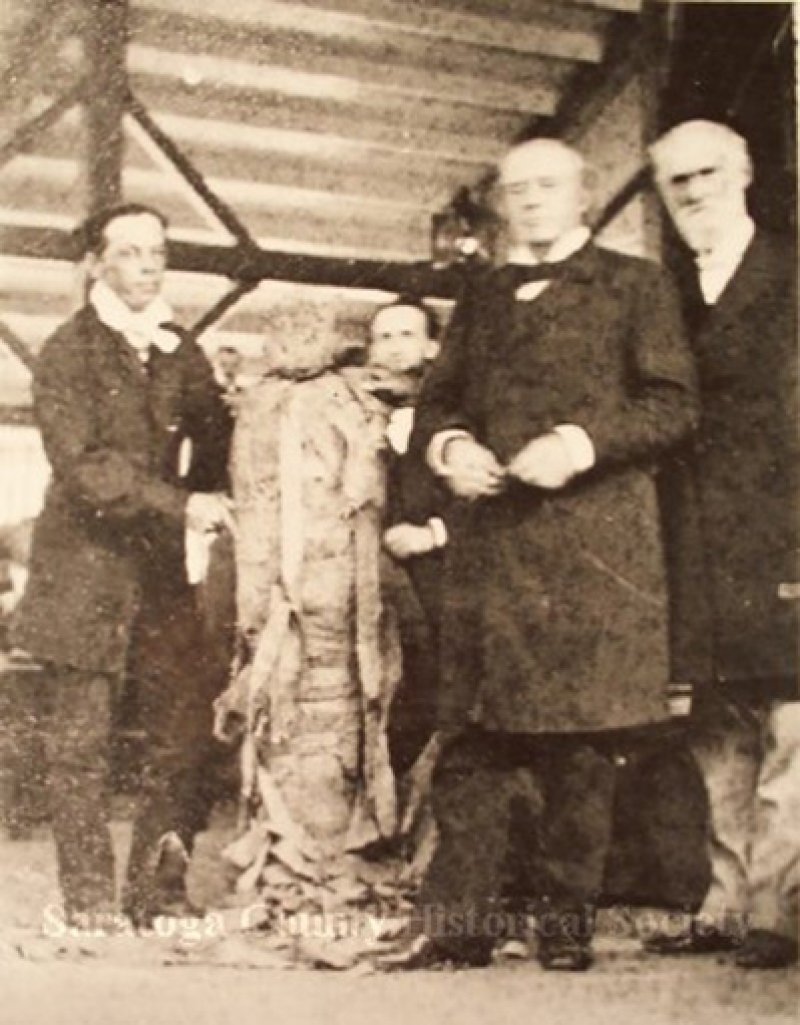 Local historians and writers have previously told the story of Tothmea, the 3600-year-old Egyptian mummy that was presented to a local museum in Round Lake in 1888. Her travels have taken her from Egypt to Round Lake to Brazil and several places in between. After I learned of some recent developments in her story, I was inspired to recount her journey and update it a bit more.

Tothmea was first discovered in the Egyptian city of Thebes. Sources differ on her discovery date, but she was found either in the late 1700s or in the 1880s. Some sources indicate she was a priestess, but what is more likely is that she was a musician, likely a singer, and served the goddess Isis when she was alive. She was one of a pair of mummies initially given to Samuel Cox, an American ambassador to Turkey in the 1880s. Cox took a trip to Egypt and was gifted the mummies by the khedive after he read Cox’s book titled, “Why We Laugh.” Upon Cox’s return to America, Dr. H.C. Farrar, curator of the George West Museum of Art and Archaeology in Round Lake, expressed his interest in Tothmea and eventually obtained her.

In 1888, a reception took place for Tothmea, where she was presented to a large audience at the Round Lake Auditorium. The picture accompanying this article features some of the men who spoke during the reception. Bishop Newman, the second man from the right, delivered, “the first in a series of lectures on biblical archaeology.” Professor Lansing, who is on the far left, spoke of, “the history and styles of embalming.” The man on the far right is said to be unknown, but some sources identify him as Dr. Farrar. Farrar is recognized for giving Tothmea her name, as her original name is unknown. After the men spoke, Tothmea’s casket was tipped up, the lid was removed, and she was revealed to the audience.

She was then taken out of the casket, unwrapped, and examined. Unfortunately, preserving Tothmea was not on the list of concerns that day. At one point, they wanted to move her into a sitting position and broke several bones, including a rib. After her reception, she was kept on display at the George West Museum until it closed in 1919. It seemed no one knew what to do with Tothmea at this point. There are stories of village residents, on several occasions, staging her around town to scare people, including one Halloween. Tothmea was eventually purchased by a man named J. Franklin Clute shortly after the museum closed.

In 1939, Tothmea was loaned to the Schenectady Museum by Mr. Clute. Much of Tothmea’s time in Schenectady was spent in the basement of the museum. The museum’s director, George Cole, was quoted as saying Tothmea was, “a rather disgusting mummy.” It’s not clear when it happened, but an object had fallen onto her head and created a hole on one side of her face. Also, the material she was wrapped in was very tattered and decayed.

Much of what I found about Tothmea’s time in Schenectady indicated that the museum was trying to find another home for her. One issue was that the museum was provided, “unauthenticated documents,” and didn’t have the funds to spend on affirming her authenticity. Since Clute loaned Tothmea to the museum, they needed his consent to get rid of her. Any attempts made by the museum to contact Clute were unsuccessful. After The Knickerbocker News published an article about Tothmea in 1972, the museum received an outpouring of calls asking to “adopt Tothmea.” She was also put on display for a fundraising event benefitting a local tv station, but other than this, she remained in the museum’s basement.

Tothmea’s next move came in 1978. Mary Hesson, Round Lake Historian at that time, placed a call to the Schenectady Museum asking for the mummy back, to which they agreed. Hesson placed her in a plexiglass case and would occasionally display her during festivals, or for schoolchildren. In October 1978, a competition was held for children to submit pictures and write letters to Tothmea telling her what they loved about Round Lake. As time passed, Hesson recalled that Tothmea’s smell began overwhelming her office. A decision was made to find a place to bury her, rather than display her, since she had deteriorated so much over time. To do this, they needed the permission of Inez Sewell, who had inherited Tothmea from Clute.

In 1984, Tothmea was stored at the residence of one of Sewell’s relatives, while plans were made to find a burial site. When Tothmea’s burial site was confirmed and arrangements were made to get her, she had disappeared. Years later, Hesson received several newspaper clippings that revealed Tothmea was in California. A 1988 Los Angeles Times article indicated Tothmea was a part of an Egyptian mummy collection at the Rosicrucian Museum in San Jose. Then, in 1995, the museum in San Jose decided to donate her to the Rosicrucian Museum in Curitiba, Brazil.

The most recent development in Tothmea’s story was the result of the “Tothmea Project” at the museum in Curitiba. In 2019, the museum did a digital facial reconstruction to show what she may have looked like while she was alive. Pictures of this can be found on the museum’s website. Tothmea is still in Curitiba today and is the only Egyptian mummy in Brazil. The museum has a dedicated a climate-controlled room for her that mimics the appearance of an ancient Egyptian tomb.

Matt Bonk graduated from SUNY Albany in 2019 with a bachelor’s degree in History and is currently working at Brookside Museum in Ballston Spa as a museum assistant.

Read 335 times
More in this category: « McGreivey’s Restaurant Not Guilty The Saratoga Economic Development Corporation »
back to top