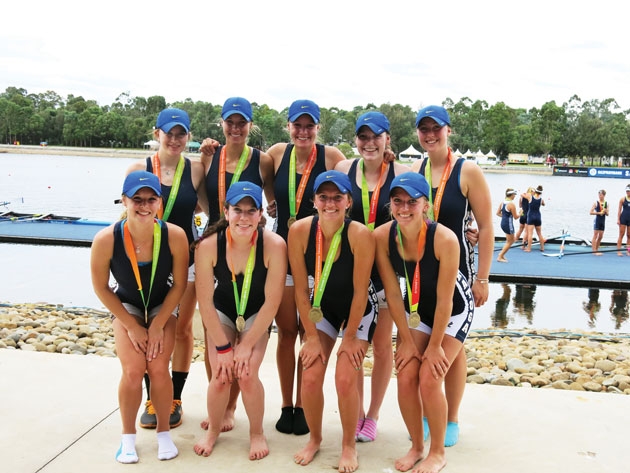 SARATOGA SPRINGS – It was worth all those 5 a.m. winter mornings on Fish Creek for sisters Claire and Caroline Murphy. Bundling up for the cold did not stop the bitter wind from biting at the exposed skin on their faces and hands or keep spray from the smooth water from sinking into the layers of clothes as their muscles strained to maintain the strenuous rhythm of oars to water.

But the moment their team crossed the finish line in the Sydney International Rowing Regatta, grabbing the gold for the girls rowing team, they knew the effort was worth the price.

“We race in the U.S and in Canada, but we have never been on a stage that big,” said Caroline, a senior at Saratoga Springs High School. “When we stood on that Olympic dock where Olympians had stood, it was the greatest feeling – it was worth it all.”

“It was definitely all worth all those practices,” said Claire, a SSHS freshman, adding that even the adventure of travelling to Australia for 10 days, seeing the sights and meeting the U.S. team was an once-in-a-lifetime experience. “We had such a great time.”

Claire and Caroline are the daughters of James and Laurie Murphy of Saratoga Springs and are members of the Saratoga Rowing Association. The Girls’ 8 Team was invited last fall to participate in the international event after winning the Head of the Charles Regatta held in Boston.

Coach Eric Catalano said the competition was even more significant because it is the first time the World Cup competition, the Interstate competition and the International competition were held at the same time in Australia.

“We were the only ones invited from the United States,” said Catalano, who coaches the boys, girls, modified, freshman and varsity teams for SRA.

Claire and Caroline said they both tried the sport when they were in the seventh grade at a rowing camp and fast fell in love with the discipline and dedication required to excel at it.

“Dad had tried rowing and said it was fun, so I did it at camp,” explained Caroline, who will be attending Duke University in the fall. “I like how at times it can be really intense and at other times it is so relaxing and allows you to de-stress.”

Claire, a lacrosse athlete, had looked at rowing a little more warily and thought she wouldn’t want to switch sports. But that all changed when she began to notice the opportunities opening up for her older sister.”

“I saw all these cool places Caroline got to go [for competitions] so I tried it at camp and really liked it,” said Claire.

Preparing for rowing competitions is not for the faint of heart, said the girls, pointing out that the teams usually enter the water in April for the training, but it is, said Caroline, actually a sport that requires year round dedication and preparation.

“In the winter we get ready by working out with the rowing machines, bicycling and doing a lot of core exercises,” said Caroline, noting that their workouts tend to avoid weight-bearing routines to avoid injuries.

Once practice sessions start in April, SRA members work out in a variety of ways, sometimes rowing in singles, doubles, or in the longer, eight-person boats.

“Training can be fun,” said Claire, adding she’d rather be in race than the grueling pace of the practice. “In the spring we have the shorter races and those are the most fun – the most adrenaline.”

While it should have been a time of indoor conditioning, when the team received the invitation in February, they had only two weeks to get back on the water where they could dig in and ready themselves.

“Most of your strength comes from outdoor rowing,” said Caroline, adding that it takes more than putting oar to water to win a race. “The sport is really team oriented as well as an individual achievement.”

Claire explained that for the 2000 meter run in Australia, the team has a set rhythm and system in place. For this particular race, she said, each team had a lane they must row in and everyone begins the race at the same time.

“You have to start up and you have rhythm and beats – sometimes you have to shift down and other times, pull as hard as you can so we don’t waste energy,” said Claire, noting that the coxswain, the person who steers the boat and calls out directions and instructions, is crucial to the team’s ability to work well together. “The coxswain has to let us know where we are and what we are doing.”

Catalano, who is world-renowned in the rowing community, said the team was incredible during the meet, which featured two days of heat races and the finals on Sunday, March 24.

“I could not be prouder of those girls for how they faced adversity within the race and for how they responded,” said Catalano, noting that the coxbox, the speaker through which the coxswain calls out directions, did not work during one of the heats and almost cost the girls’ the race. “They did really well.”

Catalano noted that the five seniors on the team were all headed to colleges with rowing teams.

“They are all recruited athletes,” said Catalano, noting that Shannon was heading to the University of Pennsylvania, Lexi to Cornell, Caroline to Duke, and twins Kelli and Keri to Boston University.

Both girls pointed out that just about anyone can join the rowing association, no matter what their skill level is and have a good time.

“They never make cuts, so anyone can do it,” said Claire. “You can make it what you want it to be.”

“They even have adaptive rowing for physically handicapped or disabled rowers,” pointed out their dad, Jim, who added that the rowers truly respect the coach.

“They listen to him, he has them under control, and never for a moment did Laurie or I had a worry about their safety or welfare halfway across the world,” said Jim. “By his focusing on success, by holding up that model, they want to do their best.”

For more information on Saratoga Rowing Association, call (518) 587-6697 or email This email address is being protected from spambots. You need JavaScript enabled to view it.