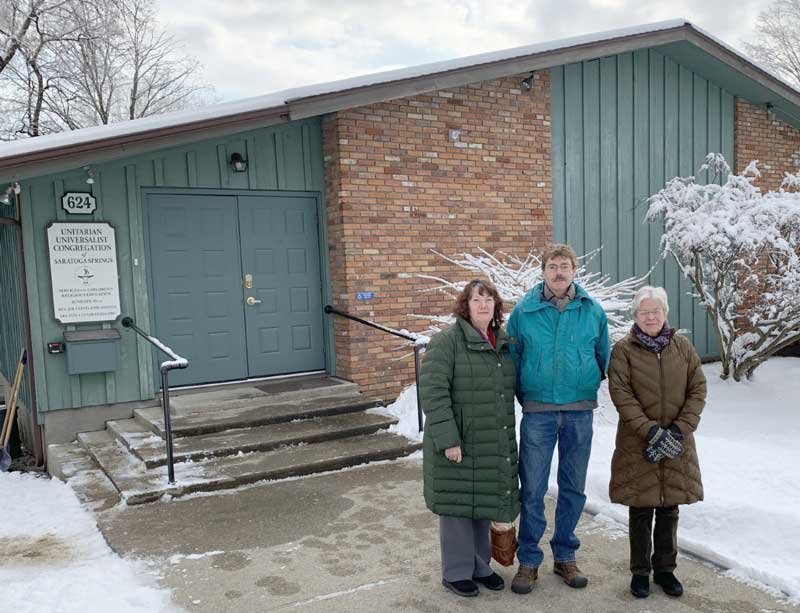 SARATOGA SPRINGS — Having exceeded its phase-one fundraising goal of $175,000, the Unitarian Universalist Congregation of Saratoga Springs (UU Saratoga) is stepping up its effort to establish a new home.

“We’ve reached a point in our development where we feel it’s time to move to a larger space that better reflects our spiritual openness and commitment to environmental sustainability,” said Sue Bender, chair of UU Saratoga’s Capital Campaign Committee.

Increasingly cramped on its current campus at 624 North Broadway, UU Saratoga now seeks a property of approximately three acres to accommodate a sanctuary that seats at least 150 and will serve many more families with children through its religious exploration programs. The site also should allow parking for at least 70 cars.

“We have looked at several locations that may meet our needs but are continuing to explore other possibilities,” said Bender. She noted that a property owner who donates a site or grants one at a reduced cost to UU Saratoga, a tax-exempt organization, would be eligible for a substantial tax credit.

Founded in 1998, UU Saratoga purchased its current building in 2001 from a congregation of Jehovah’s Witnesses. The sale of this building – which occupies one-third of an acre of prime real estate on North Broadway -- will generate additional funds for the construction of a new meeting house.

“We’re especially appreciative of a foundational gift made early in the project by UU Saratoga members Eric and Beverly Lawson,” Bender noted. “Since last summer, more than 70 member households have contributed an additional $197,000 in capital funds, bringing the purchase of a new property within range.”

While membership in most religious denominations has declined in recent years, many Unitarian Universalist congregations are expanding. The denomination grew nationally by 15.8 percent from 2000 to 2010, according to the Association of Statisticians of American Religious Bodies. UU Saratoga has been attracting new members under the leadership of the Rev. Joseph Cleveland, whom the congregation called in 2014.

“We think our open-minded faith has a bright future in our community,” said Pam Collins, president of the UU Saratoga Board of Trustees. “Instead of a common theology, we have a set of common values that start with the worth and dignity of every human being and support a free and responsible search for truth and meaning. We’re individuals finding our own path and we’re doing it in community."

A retreat aimed at engaging all UU Saratoga members in the process of visioning and planning a new home has been set for Saturday, May 2. All who may be interested in the congregation are invited to learn more at www.uusaratoga.org.

More in this category: « Saratoga County Historical Society Announces New Board Members The Last Picture Show »
back to top