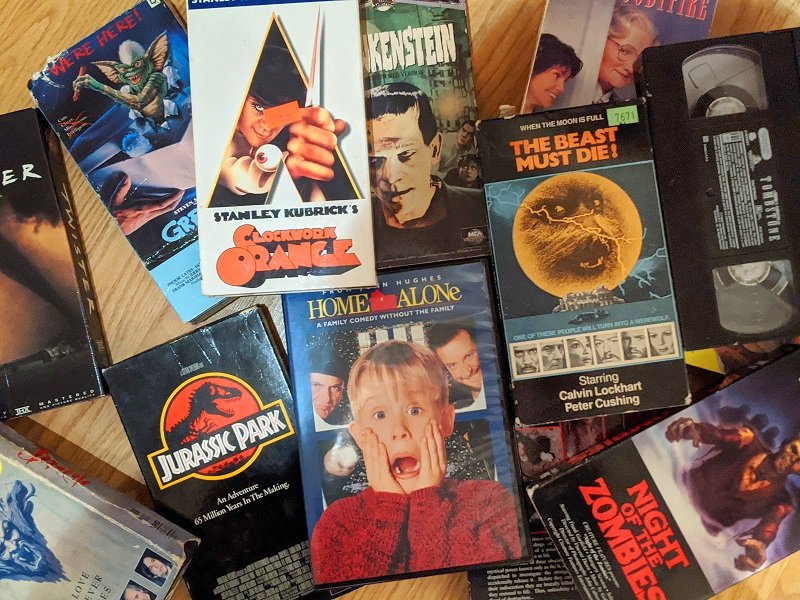 GREENWICH – Bob Gustafson was 38 years old when Macaulay Culkin stared back at him from the video store shelves, a look of shock on the child’s face after being accidentally left “Home Alone” by his family on their Christmas vacation.

Gustafson, who today is 67, is old enough to remember when the Video Home System videocassette format – that is, VHS - was first introduced in North America and the subsequent VHS vs. Betamax format wars that followed.  During his time in the industry, he’s seen the bricks-and-mortar retail delivery of movies accompanied by the advent of things like Netflix and YouTube, Hulu and Amazon Prime, Thumb Drives, DVDs, Blu-ray, Digital Download, Cable TV’s Video-on-Demand, and a myriad of other movie streaming services.

“In June it will be 30 years since I started this,” says Gustafson flanked by the 10,000 or so titles inside his shop, Video Korner II. He estimates those titles are pretty evenly split between DVD’s and VHS tapes, which he still rents as two movies for two days at a rental cost of two dollars.  But, the clock is ticking; those days coming to an end.

After 30 years, he says, “I’m going to retire.” He was asked if he’s got any set plans following his retirement.  “Not a ding-dang thing,” he says with a laugh. “I’m going to take it easy for a while.”

Gustafson anticipates soon putting the store and the land he owns which it sits upon up for sale. He says he’s already got a person who is interested in the property, and that the proposal does not include the continuation of a video store.

Gustafson first got in to the business in 1990 when he and a partner opened a 500-square-foot store at the far end of the village in Greenwich. The partners started their business with 500 movies and built our own shelves. A few years later, Gustafson bought his co-owner him out of the partnership and has been operating the business on his own ever since. In 2000, he relocated the business to Main Street, bought the land and constructed a free-standing building more than six times the size of the original store. He re-named it Video Korner II. Business was booming, and he says he paid off his 20-year mortgage in 4-1/2 years.

“How many video stores are even left in this country today?” Gustafson asks.

In July 2000, Billboard Magazine reported there were nearly 28,000 video rental storefronts in the U.S. By 2004, video rental lender Blockbuster was at its peak, boasting about 9,000 stores globally. Today, a Blockbuster store in the city of Bend, Oregon is the only one which remains. In December 2017, financial news and opinion company 24/7 Wall St. published an article on rapidly changing industries, and reported that about 86% of the 15,300 video rental stores that were operating in 2007 had, by a decade later, been shuttered.

“I have people tell me they watch them on their telephone. How do you compete against that?” asks Gustafson, who despite the changing video retail industry says the state of the industry has nothing to do with his moving on. Simply, the time has come for him to retire.

“It’s time. It’s been the best job I ever had; there’s nothing like being your own boss.”

As far as the movie titles and all those VHS tapes, Gustafson says he’s not sure what will happen with the inventory. For now, he’s letting his customers know of his future plans are and putting together a list of titles they’re interested in purchasing when a sale of the location is finalized.