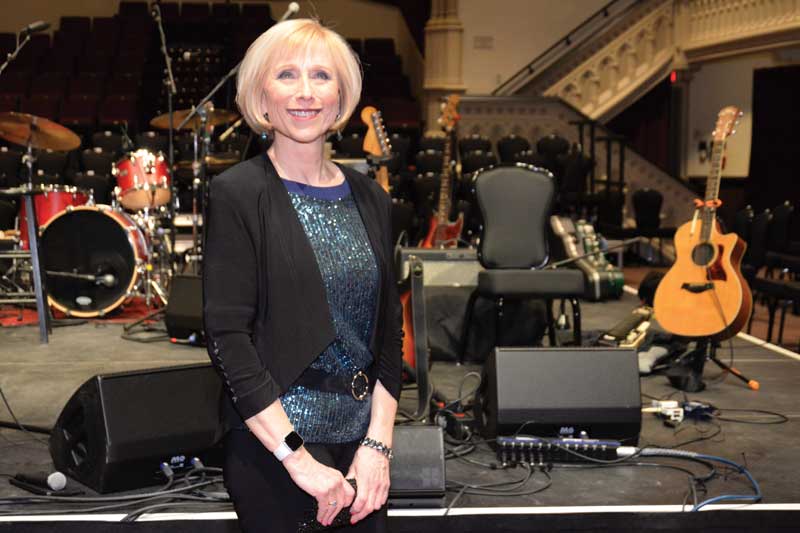 Universal Preservation Hall, a new 700-seat theater-in-the-round performance space, just prior to the first-night opening of the doors, on Feb. 29, 2020. Photos by SuperSource Media, LLC.

Teddy Foster beamed beneath the sparkle of stage lights Saturday night, unveiling the grand room to the eyes of several hundred theater goers.

“I’ve been waiting to say that a long time,” said the newly named director of Universal Preservation Hall, which stands on Washington Street, one block west of Broadway. “A really, really long time.”

Foster joined the board at UPH in 2006, became its president three years later and has stewarded the grand old church building from the brink of obliteration to its present-day promise as a thriving performance and community center in downtown Saratoga Springs.

It was built in 1871 and served as a Methodist church for its first 100 years, as well as playing a role in the city’s civic life by providing a venue for visiting statesmen including Teddy Roosevelt, William Howard Taft, William Jennings Bryan and Frederick Douglass. But by the 1960s, it had fallen on hard times. Downtown Saratoga was in decline and the Methodist congregation relocated to a new building outside of town. The church sat empty for several years. A local Baptist congregation bought it for $18,000 in 1976 but hadn’t the means to preserve and restore the aging structure.

In 2000, the city condemned the building. Local preservationists organized a nonprofit group and reached out to the Baptist congregation to help save the structure. Donations paid for an initial wave of renovation work beginning in 2003. The building was stabilized but the restoration effort ground to a halt with the economic collapse of 2008-09.

The venue had housed a smattering of events in recent years – from fashion shows to First Night celebrations, and concerts by Colin Hay and John Sebastian. Max Weinberg – drummer of Bruce Springsteen’s E Street Band, brought his 15-piece big band to UPH in 2010, and Brooklyn-based band Cuddle Magic performed a memorable mixed-media show at the hall with pianist Phyllis Chen and novelist and short story writer Rick Moody in 2014. Because the renovations were only partly completed, however, the maximum occupancy of the hall was severely restricted.

“I was smart enough to realize I needed either a plan to move forward or an exit plan,” Foster said, speaking about the future of UPH in 2015. “You’re remembered not for how you start something but how you leave it. I didn’t want to be remembered as the woman who let down Universal Preservation Hall. So, we got busy.”

In the summer of 2015, following three years of discussions, an operating alliance was created with Proctors, the historic theater in downtown Schenectady that has served as a performing arts destination in that city since the 1970s.

A $13.5 million renovation project followed. The original stained glass windows and the building’s pews have been restored. New seating descends from the rear balcony and, on the other end of the 7,000 square-foot room, ascend into the apse. Movable platforms allow the space to open up, depending on the requirements of any given performance. There is a new glass atrium entryway and elevator, and a state-of-the-art sound system. The architecture maintains its Gothic accents and re-opened to the public on Feb. 29, Leap Day.

“When we saw it was possible to open on this day, we leapt,” quipped Proctors CEO Philip Morris on opening night. The Proctors Collaborative includes Proctors in Schenectady, Albany’s Capital Repertory Theatre and now UPH in Saratoga Springs.

The 700-seat theatre-in-the-round set-up is not alien to longtime regional theater goers, sharing the performer-audience intimacy of the former Starlite Music Theater - which began its life as the Colonie Musical Theater in 1958, before taking the more familiar Colonie Coliseum name in the early 1970s.

It seems fitting Rosanne Cash was selected as the debut performer in the re-christening of the grand hall. The eldest daughter of Johnny Cash was 9 years old when the Man In Black performed at the 5,000-seat Convention Hall on Broadway on a November night in 1964 in support of his then-new album “I Walk The Line.” One year later, Saratoga Springs’ largest indoor venue went up in flames. The emergence of UPH marks the return of a mid-sized, year-round venue to the downtown district. According to a statement issued in 2018, UPH will serve an estimated 65,000 visitors per year, with a $3.5 million annual economic impact as a year-round venue space.

As for parking, UPH is located within a few hundred feet from the four-level parking garage on Woodlawn Avenue. The structure, built in 2012, holds about 450 vehicles. The garage will provide easy access to a planned glassed-in entryway to the east of the hall’s current entrance.

Rochmon Record Club which began its monthly gathering under the guidance of music savant Chuck Vosganian, AKA “Rochmon,” will mark its return to UPH at 7 p.m. Tuesday, March 17, when the offering will feature a presentation of Paul Simon’s “Graceland.” Tickets are $25.

Tickets for all shows are available by phone at 518-881-4500, online at universalpreservationhall.org or at the Box Office at 25 Washington St.