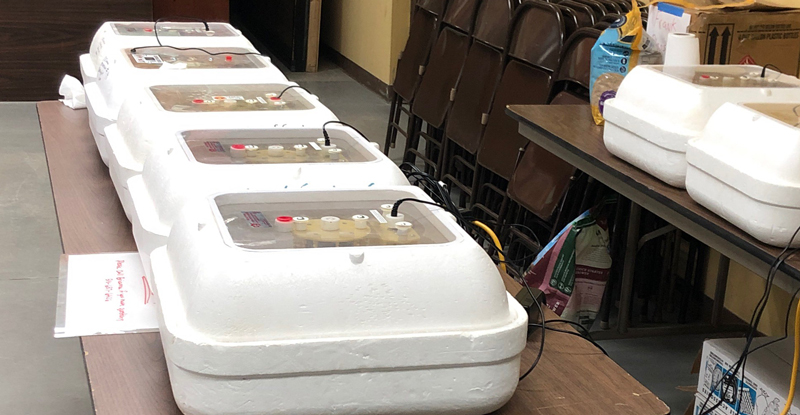 Of the 26 dozen eggs sent out, 12 dozen were hatched at the 4-H training center, a learning facility in Ballston Spa. Photos provided.

SARATOGA SPRINGS — While schools across the state closed their doors and people self-isolated in their homes, 26 dozen chicken eggs wanted to break out of their “home” and hatch during COVID-19.

The fertilized eggs were sent out to participating elementary schools in Saratoga County as a part of the 4-H outreach program. The program allows classrooms to experience the 21-day development of a chicken egg. Brieanna Hughes, program coordinator for Saratoga County 4-H animal science, said a surprising amount of eggs still hatched despite being moved from schools.

The eggs were due to hatch on March 18, the week most schools announced their closings. Hughes said she reached out to schools that prior weekend to ask if teachers were willing to take the eggs home, or offered to pick them up and bring them to their facility to hatch.

“Because a lot of teachers were being told they couldn’t go into their schools so I didn’t want anyone to be burdened with this,” Hughes said.

Despite school closings, only 12 dozen eggs were collected from schools and hatched at the training center in Ballston Spa. Of the 26 dozen eggs sent out, over 75 percent hatched which Hughes was surprised by.

Hughes said the hatch rate was by chance, and added that she expected a lower hatch rate simply from moving the chicken eggs. Transportation of the eggs is not recommended due to drastic temperature changes. However, the unstable period for the eggs is earlier in the development as well as the day of hatching if a small movement occurs.

“We almost got them at the ideal time. It isn’t ideal to move them at all, but it was pretty cool to have such a good hatch rate,” Hughes said. “What that means is that the school did a really good job taking care of the eggs for the first 18 days and then we were able to finish that out.”

Seeing the eggs develop for the 21 days allows students to learn about the development and embryology. Hughes said in the beginning, the program attains the fertilized eggs and provides the schools with incubators and equipment. 4-H hosts a small teacher training where they pick up all the needed materials and bring them to their classroom. Not having a set curriculum, schools are at liberty to teach what they want.

“But our program is incubation and embryology so that is what they’re learning about, the development of an organism. They get to candle the eggs and actually see the changes in the embryo. They can see the first veins coming and an eye during the forming of the head,” Hughes said.

Once the eggs are hatched, teachers are at liberty to keep them or give them pack to the program.

“A lot of teachers have friends that want chickens, but we want to make sure there is a resource so we also provide someone to take them,” Hughes said.

She added that these eggs were a part of the first rotation for the hatching program. The second session was anticipated to start at the end of April, but Hughes said they’re waiting to see how the self-distancing plays out. The participating schools for this sessions included Schuylerville, Arongen Elementary in the Shenendehowa school district and Greenberg Child Care Center.

More in this category: « State of Emergency: Week 3 Yellow Ribbons: Meet the “Yellow Ribbon Lady” »
back to top