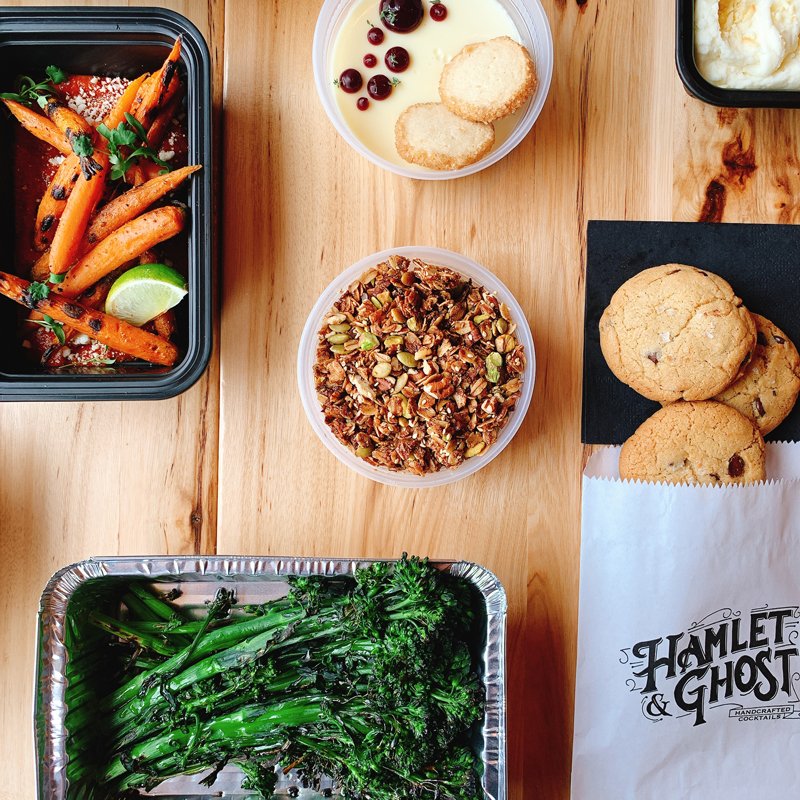 Getting take-out in Saratoga? Tag and post a picture of your excursion and be entered into a weekly drawing to win gift cards, and support local restaurants as well as families in need. Photo provided by Hamlet & Ghost.

SARATOGA SPRINGS — The idea came to him, as good ideas sometimes do, while otherwise engaged in the seeming mundanities of everyday life.

Jacob Hopper and Dempsey, a yellow Lab, were out walking through Saratoga Springs. Hopper had started up the Evander and Louise lifestyle and travel brand, just as everything else around him began locking down.  March 1 was a heckuva time to launch a new business.

“Horrible timing,” Hopper admits. A lot of the work is centered on the partnerships he created with 17 different local restaurants.

“We know eating-out and taking-out can be a luxury for some people. And a lot of us are on limited incomes right now, watching the budget, but it’s really important that we support our small local businesses as much as we can. I think the more we can support them, the better we will be when we come out of this,” Hopper says.

“Well, we launched and then this all happened. I started thinking: what can I do?” The answer came to him while out walking with Dempsey.  “Tag Your Take Out. It just popped into my head. I thought it might be a good way to promote these restaurants who really need help.”

The way the campaign works is this: people going out for take-out food snap a photo or capture a video of their excursion and post it to Instagram, tagging Evander and Louise at @e.l.saratoga and using the hashtag #tagyourtakeout.

In addition to the photos making the rounds of social media and adding to a sense of community, Hopper’s E&L selects four winners every week from the posts. Each of the four receive a $50 gift card redeemable at one the group’s 17 restaurants. A $10 gratuity will also be provided to the restaurant, and for each $50 gift card given away, a $50 donation will be made to Franklin Community Center.

“We’re buying the gift cards. I didn’t want to ask the restaurants to give us gift cards because they’re already hurting enough, and we’re also including a $10 gratuity to the business because I think it’s important to remember that there are still people working. They might not be coming to your table like they usually do, but they are putting themselves at risk,” Hopper says.

“With each gift card we give away, we’re also giving a $50 donation to Franklin Community Center as well – because the whole concept from the beginning was: support our local restaurants and support families who are in need, because the families can have other basic needs,” he says. “We’ve got 22 giveaways funded, so currently that’s $1,100 in gift cards and $1,100 to Franklin Community Center.”

Franklin Community Center – which is located on Franklin Street – is a non-profit organization providing basic necessities and services to less fortunate individuals and families in Saratoga.

“Anybody can tag their take-out at any locally-owned restaurants, and we’re certainly encouraging people to have fun with it,” says Hopper, adding that the support of sponsors, such American Natural Gas, help make the gift-card drawing possible.  “It’s focused on Saratoga, but we’ve gotten some who have tagged in Ballston Spa, and we’ve gotten some from Albany. Post a photo of it, tag us and tag the restaurant and you can be entered in the drawing.”

Each week on Wednesday afternoon four winners are picked, and Hopper says he anticipates staging the drawings and gift card winners for at least the next couple of weeks.

“We want people to go and support local restaurants. The restaurants – obviously they’re all hurting and the feedback they’ve given me is they’re doing what they can to stay afloat and to keep their staff as much as is possible.”

For more information about the Evander and Louise #tagyourtakeout initiative, and a list of the Saratoga eateries where the winning gift cards are redeemable, go to: evanderandlouise.com/tag-your-takeout.

More in this category: « State & City This Week Drive-Up Coronavirus Testing Site Opens in Queensbury »
back to top