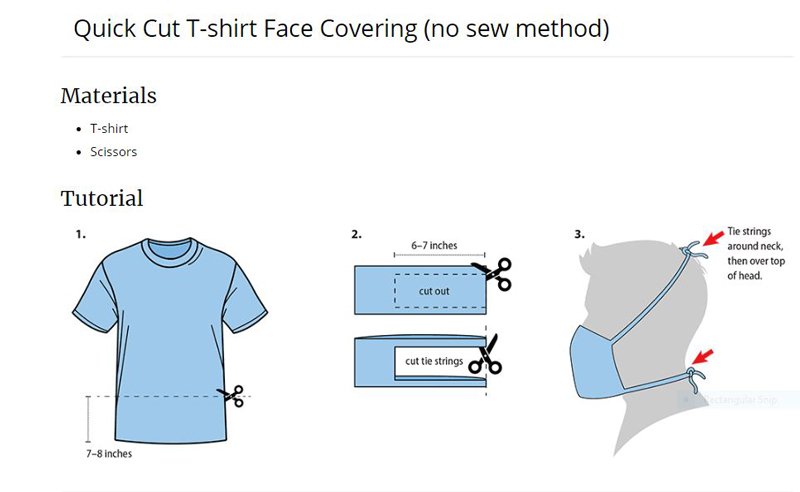 How to make a mask. Illustration: CDC.

BALSTON SPA — Saratoga County officials - featuring staff from the Department of Public Health, the Office of Mental Health and Office of Emergency Services - hosted a Facebook Live event April 14. Among the information they shared is the following:

• As of April 14: 229 county patients had tested positive for the coronavirus and 122 of those 229 have recovered at this time.

“What the public health department is doing is when someone is positive there is an infectability period and we look at every move that person made during that time frame. They identify to us where they’d been and who they’d been in contact with. We then reach out to each individual who is then at a high risk of contracting COVID-19 and we place them in isolation. That way if they become ill, they will not infect others.”

Testing sites: Saratoga Hospital has limited capacity; Albany has a drive-thru at the campus of SUNY- Albany campus, and Warren County has a testing site at their municipal site.

How to take a test: “Warren County requires a prescription from a doctor and an appointment. For Albany, you can go to the New York State Department of Health website where you can fill out a form to receive the test. However, they’re not testing everybody.  There is a priority for someone who is ill and showing symptoms of illness, as well as health care workers.  If you’re asymptomatic and you just want to have a test because you’re worried, then you may not be tested at this time. If you’re asymptomatic – you’ve had no symptoms, but you’ve been in contact with someone who’s tested positive, you’d be higher on the list.”

Is testing for antibodies available in the area? Not yet. Antibody testing is coming along, and there is a ramping up and developing of capabilities to widely disseminate testing, but it hasn’t come to the area yet. There is a trial underway at Albany Med St. Peter’s that gives plasma from people who have recovered from COVID to patients who are actively affected. People who have recovered can also have their antibodies tested as part of being a donor for that program.

Why has there been no disclosure of specific municipalities within the county where residents have tested positive? “We have cases in every area of our county, cases in every zip code. Giving zip codes at this point could be giving out a false sense of security of people are thinking: ‘oh there’s only one case that lives in my area.’  You have to assume that everyone has (the potential) to be positive at this time.”

The Department of Public Health encourages all individuals to wear a mask any time they are out in public. Given mask shortages, it directs residents to the CDC website as a helpful resource that outlines how to wear a mask and instructions on how to make a homemade mask. That link can be accessed at:  www.cdc.gov/coronavirus/2019-ncov/prevent-getting-sick/diy-cloth-face-coverings.html

More in this category: « Open to Saratoga Residents: Drive-Up Coronavirus Testing Site Opens in Queensbury Saratoga Hospital Offers Telehealth Services to Meet the Needs of Patients During Pandemic »
back to top