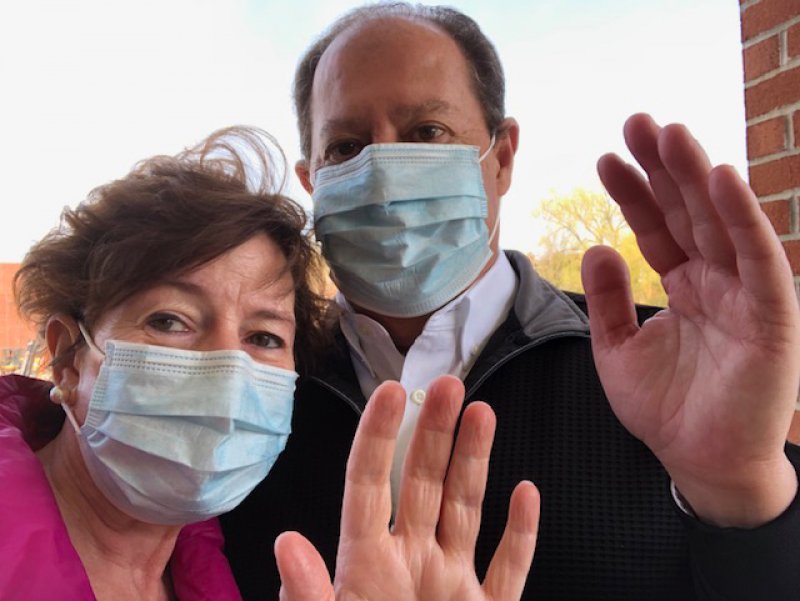 SARATOGA SPRINGS — As the community fights together against this viral disease, some individuals are lucky to not personally know anyone fighting the battle with COVID-19. Public knowledge of symptoms and social distancing are well known, but what happens to someone after they have tested positive?

Saratoga natives Barb and Steve Ferraro are on day 44 in their battle with COVID-19, and still counting. For this couple, symptoms of fever, cough and body ache showed up on March 16. Two days later they tested positive for COVID-19.

“During the beginning of this when it hit this county, when we were tested there were under 20 people who tested positive, now it’s over 300,” Barb said.

Saratoga County reported its first case on March 7, 2020 and reported to have 331 confirmed cases as of Tuesday this week.

“Going through this has been very emotional and very scary. Luckily we are on the end side of this, but neither of us had underlying conditions. We don’t know how we got it, but it knocked us down,” Bard said.

The Ferraro’s immediately self-isolated themselves in their condo, but while they were isolated from the community, they also had to isolated from each other.

“Steve and I have to be separated even though we are both positive. We trusted the professionals and they believe we could keep re-infecting each other,” Barb said.

They divided the home into two parts, Barb taking the master bedroom and kitchen while Steve took the guest room, guest bath and den. Steve was still working from home, so Barb took it upon herself to be in charge of meals and medication.

Ten days into fighting the virus, on March 25, Barb reported having a schedule through the day, knowing more of what to expect from the virus. They each became their own doctors, checking temperatures, oxygen levels and blood pressure to report to their health officials.

“It’s an insidious beast of a virus,” Barb said. “You go one step forward and two back the next day…we are keeping an eye on our breathing which causes us the most concern. We are watching it very carefully and using our inhalers, monitoring our oxygen levels and drinking lots of fluids.”

Barb and Steve both “synced” up in terms of symptoms, learning about COVID as the rest of the community did. Barb recalled making pasta, one of her favorite meals, and having it taste like metal. That, along with the COVID-19 fog, are the symptoms the Ferraro’s experienced just as the rest of the world discovered it.

“It’s important for people to know that everything keeps changing, which is why we still need to be safe and stay at home. Information keeps changing, COVID symptoms keep getting added to the list and the assurance of immunity remains unknown,” Barb said.

After a scare with Steve’s worsening symptoms, he was transported to the hospital for bilateral pneumonia and is still recovering. On day 19 into the virus, Barb said she was happy to report their first symptom free day. Although they both tested negative for the virus, they are both recovering and continue to experience shortness of breath and fatigue on day 44.

Despite continuous fighting with the unknown, Barb said the amount of community support they received was astounding. Neighbors would reach out to the couple and ask if they needed any groceries, and family members kept close through social media. She thanked Saratoga Hospital and Public Health workers for their daily efforts to ensure the couple was safe.

Talk about re-opening the community has Barb worried, noticing that people are not taking to wearing a facemask when recommended. She went for a walk Tuesday this week and reported seeing very few masks on the families enjoying the Spring weather.

“People wearing masks are just a simple thing that they can do. I think the lines are getting blurred. Think about whom you are staying home for. You are not just protecting yourself in this situation,” Barb said.

According to their website, the CDC recommends wearing cloth face coverings in public settings where other social distancing measures are difficult to maintain (e.g., grocery stores and pharmacies) especially in areas of significant community-based transmission.

More in this category: « COVID-19 Regional Roundup This Week Testing Sites for COVID-19 »
back to top