Vaccines On the Way Arriving in New York Dec. 15 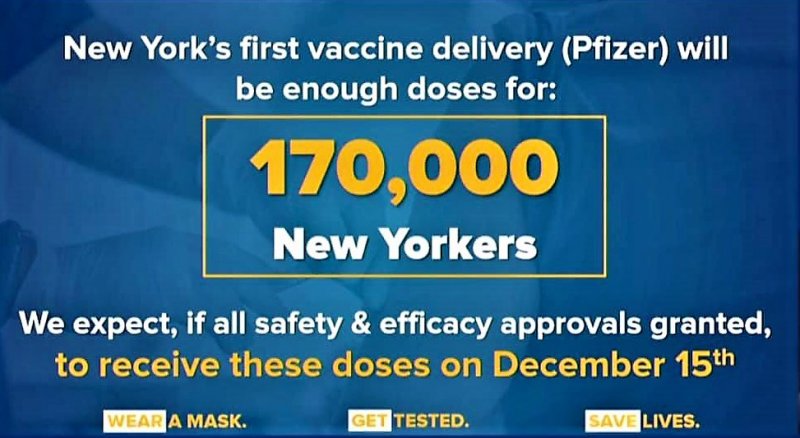 Additional Moderna vaccines are expected to arrive in New York later in December. Nationally, by month’s end, it is anticipated there will be sufficient doses to vaccinate 20 million people nationwide, or about 6% of Americans.

Some studies show a return to a “normal” economy will occur when 75% to 85% of the public is vaccinated. The hope is that may occur by mid-year 2021, although there are many variables to consider, including public skepticism regarding a vaccine, Cuomo said. To address that skepticism, a “New York panel” will review FDA approved vaccines.

Covid-19 Infection rates and hospitalization rates due to the virus have increased across the region, the state and the country during the fall months. In early October, the average weekly positive infection rate among Saratoga County residents was 0.5%. In early November that rate more than doubled, to 1.1%. This week, the rate of infection is 3.9%.

“We hope to flatten the increase in mid-January – when social activity slows down, travel slows down and the increase of the rate slows down,” Cuomo said. “The vaccination program is really the endgame here.”

“This is probably the only issue President Trump’s people and Joe Biden’s people agree on. Both of their health advisors say small gatherings are the problem,” Cuomo said. “The CDC recommendation for Thanksgiving was: no more than your household. For people who say it’s political: Whose politics are you playing? It’s agreed to by both.”

More in this category: « Big Night for Incumbents, Woerner-Catalfamo Assembly Race Goes Down to The Wire Under Development, Under Review »
back to top