Saratoga Springs: State of the City 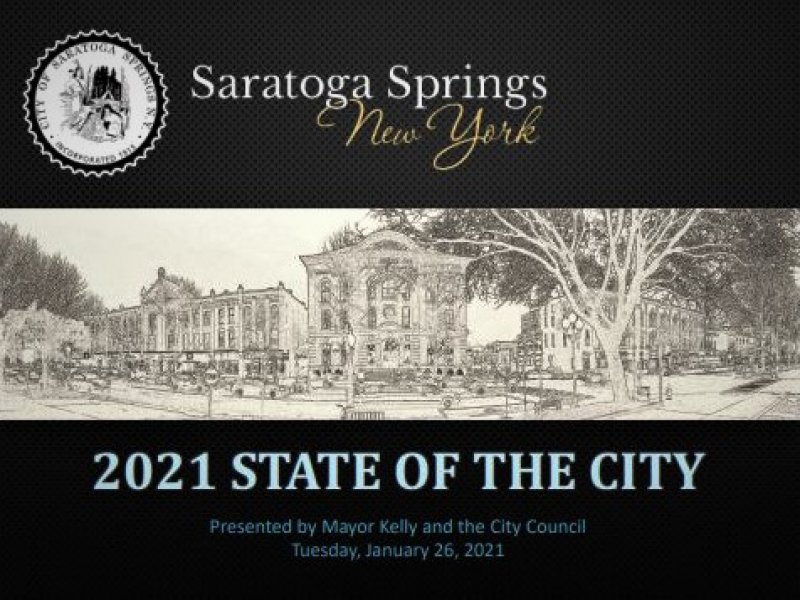 Each of the five council members and both supervisors representing the city at the county level were allotted time to speak. The meeting included a moment of silence for all who died during the pandemic. COVID-19 accounted for the deaths of 108 residents of Saratoga County - 38 specific to Saratoga Springs, to date.

Due to COVID-19 precautions, the annual address was livestreamed via Zoom.

“There was a time when we thought we had (already) faced a once-in-a-lifetime occurrence: the lightning strike that closed City Hall in 2018 (and) relocated us to the Recreation Center for almost two years,” Mayor Meg Kelly said.  “Obviously, 2020 unfolded in very unexpected ways. We had to pivot and work remotely, social distance, and meet in Zoom rooms.”

Here are some excerpts of the address. A transcript of the entire meeting may be read at the city’s website.

• The Saratoga Greenbelt Geyser Road Trail will soon open to the public and have a ribbon-cutting in the spring. The Geyser Trail is an 8-feet-wide, 2.8 mile-long trail that follows Geyser Road, from the Milton town line to the Saratoga Spa State Park.
• Renovation of the vandalized Civil War memorial in Congress Park is nearly complete and is anticipated for return to the park in the spring. Repair costs were covered by insurance; additional costs will be incurred for new security cameras and improvements to the site.
• The city delivered several new federally funded programs, including $540,000 in CDBG-CV funding to local service agencies, the COVID19 Small Business Grant Program, and the COVID-19 Emergency Housing Assistance Program - the latter preventing homelessness for 13 Saratoga Springs households. More than $490,000 in Block Grant funding assisted 3,000 households.

• In 2020, the city’s three Land Use Boards issued 178 decisions. There are currently 96 active applications in the review process.
• Due to the pandemic and subsequent shortage of business revenue and state aid in 2020 resulted in much lower sales tax, occupancy tax, service fees and other city revenues, reflected in the city’s 2021 budget, which was adopted on Nov. 30.
• In 2020 the city paved 12 main roads and intersections.
• Future: a Broadway Master Design Plan was created via a partnering of the DPW and the Downtown Special Assessment District. The aim is to incorporate many ideas into one cohesive plan that recognizes the historic charm of the city’s downtown, while acknowledging the growing community and business expectations for public spaces. More information about the initiative is expected in the near future.

At the county:
• The new Public Safety facility at the County Farm Road complex was completed and is in operation. The county approved $350,000 to improve technology in the board room, support live-streaming of meetings and increased public engagement, as well as install Public Wi-Fi in appropriate areas.
• A new Government Review and Efficiency committee was established and charged with the responsibility of looking at all of the county’s laws, policies, and procedures, appointed boards and committees, and as well review each departmental operation.
•  The County created the new position of Commissioner of Saratoga County Public Health Services, and Saratoga Springs resident Dr. Daniel Kuhles was hired to fill the position. Steve Bulger was named new County Administrator.