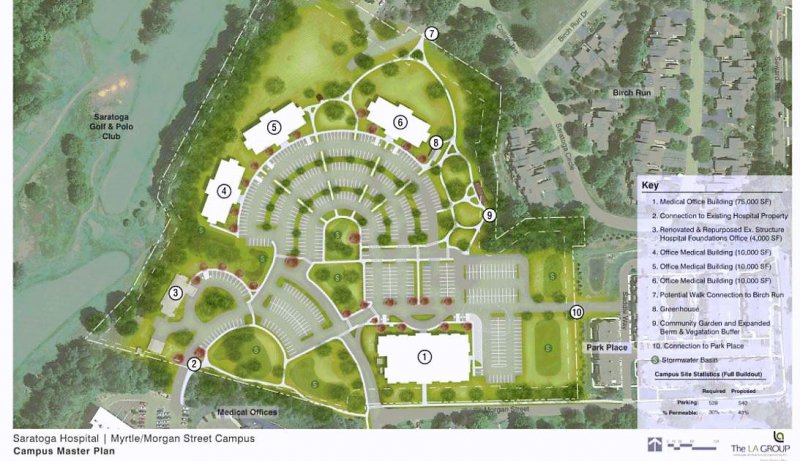 SARATOGA SPRINGS — Saratoga Hospital has submitted a sketch plan application for review by the city Planning Board with the goal of developing a medical office center on Morgan Street.

The preliminary plans include a medical office center that would allow Saratoga Hospital to bring physicians from offices throughout the city to a single location, where they could more easily collaborate on patient care. Equally important, because of the site’s proximity to the hospital, in emergency situations surgeons and other physicians could get to Saratoga Hospital in minutes.

“We have long believed that a medical office center is the best use of this last piece of undeveloped land adjacent to our hospital property,” said Angelo Calbone, Saratoga Hospital president and CEO, in a statement. “We look forward to bringing the benefits of more convenient, coordinated care to our growing community. This is the next step in fulfilling our commitment.”

“Currently, there are no specific plans for future development,” said attorney Matt Jones, Saratoga Hospital’s land-use counsel. “However, to truly assess and mitigate the potential environmental impact, we need to look at the entire parcel. To do otherwise would be shortsighted.”

Saratoga Hospital owns the Morgan Street property, which was included in 18 zoning changes made in 2019 to align the city’s zoning map and comprehensive plan as required by state law. The realignment cleared the way for medical office use on the property.

More in this category: « In Ballston Spa, Five Candidates Vying for Two Trustee Seats Man Charged After Alleged Threat To “Blow Up the Walmart Store” In Wilton »
back to top