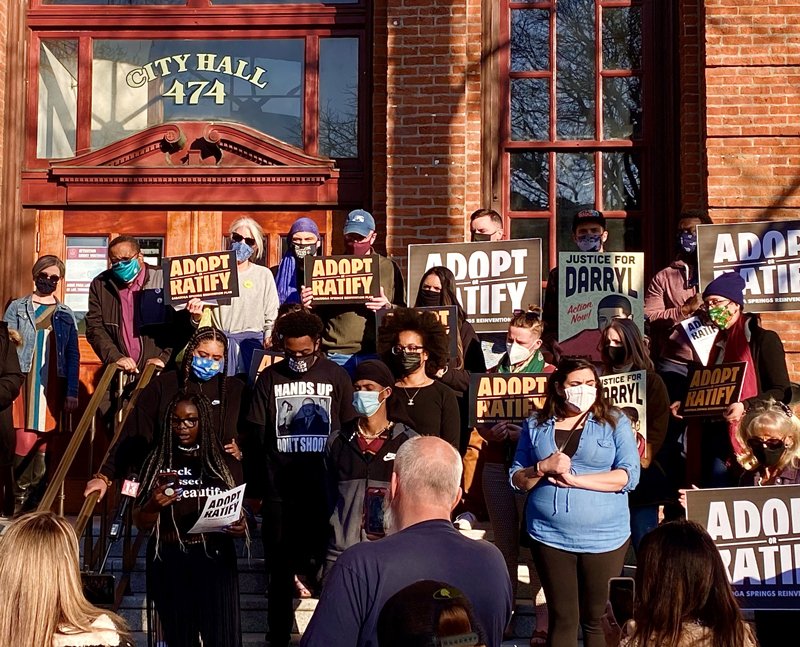 SARATOGA SPRINGS — The City Council will host the second of two special meetings regarding proposed police department reforms on Wednesday.

The meeting will be held via zoom at 7 p.m. on March 31 and will include public comment, after which the council is anticipated to vote on the matter, in advance of Gov. Andrew Cuomo’s April 1 deadline.

Last year, in the wake of the death of George Floyd, Gov. Cuomo signed an Executive Order requiring each local government in the state to adopt a policing reform plan by April 1, 2021. Municipalities not certifying adoption of a plan prior to the deadline are subject to having their state aid jeopardized.

The first of two special City Council meetings to address police reform was held via zoom on March 23. The near-two-hour meeting, which grew testy at times among some council members, included approximately 40 public speakers, the overwhelming majority of whom urged the council to “adopt and ratify” a 50-point plan submitted to the council by the ad hoc Saratoga Springs Police Reform Task Force. Among the 50 points are Task Force recommendations that the police department be precluded from initiating no-knock warrants under any circumstance, and that a Civilian Review Board, or CRB, be implemented.

A group of residents gathered on the steps of City Hall earlier this week to call on the council to adopt and ratify the plan and to express that the council be clear in its language by stating specific steps should be outlined for a CRB to be implemented, and not merely as being potentially considered. It was an expression similarly echoed by a great majority of comments made by public commentators during the council meeting that followed:  specifically, from “accepts for consideration recommendation,” to “adopts for implementation.”

More in this category: « City Open Space Plan: Seeking Community Input Under Development »
back to top