The Gay Rights Pioneer Who Grew Up in Saratoga Springs 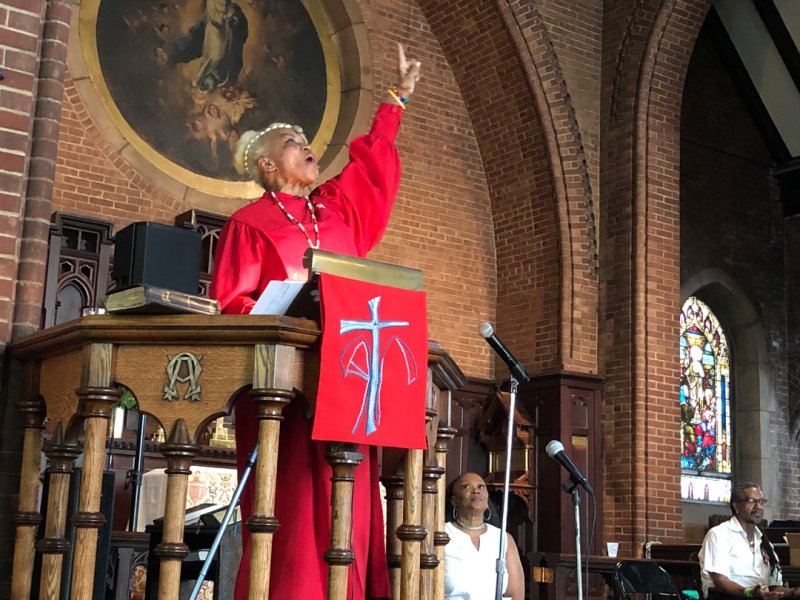 In a separate action, made possible through a combination of private donations and support from the city, a rainbow-colored crosswalk was painted on Spring Street, between the Congress Park Carousel and the Hawthorne Spring to symbolize Saratoga’s open and welcoming environment and ongoing support for the LGBTQ+ community.

“I’m glad to hear that, because it was an uphill battle,” says Rev. Magora Kennedy, thinking back to her mid-20th century upbringing in a home on Henry Street in Saratoga Springs.  “Today the library is on the spot where our house used to be,” she says.

Kennedy’s mother, who worked for General Electric, was Native American and traces her tribe back to the historically illustrated days of High Rock Park when natives introduced early settlers to the springs, several centuries ago. Her father, who hailed from St. Thomas, was a jockey who participated in races in England, but found his career short-circuited in America when African Americans were excluded from riding as horse racing became a major attraction for mainstream America after World War I.

“Coming to the United States, he was not able to ride, because of racism,” Kennedy says. “Being raised in Saratoga with a native American mother and a Caribbean father there was…well, we had a lot of push-back.”  In the early 1950s as a teenager, when news started spreading around town that young Magora was gay, her mother offered her a choice: Get married to a man or get institutionalized in an upstate mental hospital.

Asked whether there were any support systems available to her at the time, she says: “Back in those days?  No. I was given a choice to either be married or to be sent to Utica (presumably to be ‘cured’).   Unfortunately, that was happening to a lot of us who were gay. So, a lot of my friends went into convent, and a lot of the fellas went into the priesthood or into the service to get away from home.” Magora, who was 14 years old at the time, chose to get married.

The 1960s brought with it an era of activism for Rev. Kennedy. Being black, lesbian and a woman of the church, her activism would take place on a multitude of stages.

“I was very much involved in the Women’s Rights Movement and working with Gloria Steinem, Bella Abzug and Flo Kennedy. In those days there were a lot of demonstrations, so we traveled around quite a bit,” she says.  “I was also involved in the Civil Rights Movement. We had training to go down south to help black people to register to vote.” It is now 50 years later.

“The more things change, the more they stay the same. But the thing is at least today there is a light being shone on what people of color have gone through. At least it’s being seen. There was a lot of turmoil during that time in the’60s. Being involved in the Civil Rights Movement and in the Women’s Movement. There were so many things intertwining in my life,” Kennedy says.

In early summer 1969, what would turn out to be a watershed moment in the Gay Rights Movement was fast approaching.  “At Stonewall, that last weekend in June. It was a Friday. Everybody went to the Stonewall Inn, dressing up to go uptown for Judy Garland’s wake,” Kennedy recalled. Garland died the previous weekend. She was 47. Her most famous role as an actress came as a teenager in the film “The Wizard of Oz,” during which she sang the song “Over the Rainbow.”

“Judy Garland was always a friend to what in those days we called ‘The Underground,’ so everybody got together to go uptown to go to her wake,” Kennedy says. Newspaper reports count a legion of more than 20,000 Garland fans jamming the streets of Manhattan’s Upper East Side to pay their respects to the actress at the Frank E. Campbell Funeral Home on East 81st Street.

“When they got uptown, the lines were stretched around the block where she was lying in repose. It started to rain. A thunderstorm broke out. Everybody got soaking wet and went back (downtown) to the Stonewall Inn to lament and to talk about Judy Garland,” Kennedy says. “This was the time the cops decided to pull one of their famous raids. They would raid the bars on the weekends in Greenwich Village and that night at the Stonewall Inn when they came down... the word had gone out throughout The Village. Everyone emptied out of the bars and came into the street. That was the Stonewall Uprising. They called it a riot, but it was not a riot. It was an uprising and it lasted from Friday until Monday,” she says.

“I got there Saturday night. Sylvia Rivera and I were together on the streets that night,” Kennedy says.  Today, Rivera is heralded as a Transgender Civil Rights pioneer. “We got chased by a cop into what was then a cul-de-sac in the area - funny enough it was called Gay Street - but there was no way to get through. This cop took one look at me, thought I was a man, saw my collar, and said: Oh, there’s a (homophobic slur) imitating a priest. When he went for his gun, I grabbed two trash can covers, which weren’t chained down, and I clanged him upside the head.  Sylvia Rivera and I got away.”

Today, Kennedy is regarded being a gay rights pioneer, and makes her home in New York City – “the boogie-down Bronx,” she says with a laugh, sharing a term of endearment used by some residents as a reference to the borough’s claim as the birthplace of hip hop. She had five sons - “my Saratoga tribe” – whose achievements range from securing college basketball championships and high-ranking municipal posts, to Presidential citations for volunteering for military service. She is a grandmother and a great-grandmother, and continues to operate a temple, and teaches African history and Goddess Awareness.

Rev. Kennedy was featured in the recent project “Not Another Second,” which features LGBT+ seniors and their stories at The Watermark in Brooklyn as well as in a book of the same name.

Kennedy is also one of the featured activists in a new documentary titled “Cured,” making its way to national TV screens in the U.S. this fall. The film, which will be broadcast nationally Oct. 11 on PBS, is described as “including pioneering lesbian and gay crusaders who refused to accept psychiatry’s declaration that they were sick,” was co-produced and co-directed by Patrick Sammon and Yaddo artist Bennett Singer.