Panic at the Pump 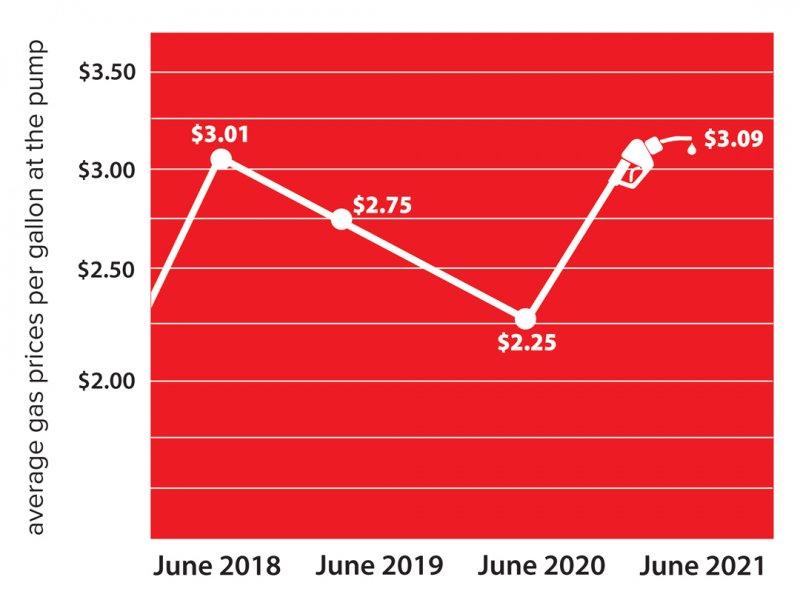 SARATOGA SPRINGS — Motorists pulling up alongside the gas pump in post-Memorial Day 2021 will notice the cost of filling their fuel tanks significantly higher than the prices of one year ago.

As of June 9, the national average for a gallon of gas was $3.07, according to AAA. In New York State, that average was slightly higher – at $3.10, ranging from $2.99 in Ulster County to over $3.20 in the North Country region of Hamilton, Lewis, and St. Lawrence counties. The highest cost-per-gallon rates are in the western part of the nation, peaking at just over $4.20 per gallon in California.

“It’s certainly higher than it’s been in the last five years.  A lot of that is (reflective) of the actual raw cost of the gas we buy is getting more expensive and a lot of that is driven by crude being up at around $70 a barrel,” says Suprenant, who has been with Stewart’s for 21 years, the past five in his current position. This week, CNN reported that on Sunday June 6, U.S. oil prices hit $70 a barrel for the first time in nearly three years.

“What is promising is that crude may not sustain at this level. The Organization of the Petroleum Exporting Countries (OPEC), and its allies including Russia, announced last week they still plan to gradually increase crude production in July. If they do increase production, this could lead to a decrease in crude oil prices, which is good news for motorists,” reports AAA.

Retail gasoline prices are mainly affected by crude oil prices and the level of gasoline supply relative to gasoline demand, according to the U.S. Energy Information Administration (EIA). Strong and increasing demand for gasoline and other petroleum products in the United States and the rest of the world can place intense pressure on available supplies.

Citing heightened levels of uncertainty related to the ongoing economic recovery from the pandemic, the EIA, in its pre-summer outlook forecast U.S. regular gasoline retail prices would rise significantly higher than they were in summer 2020, reflected by anticipated higher crude oil prices and higher wholesale gasoline margins.

“Wholesale gasoline margins have risen as a result of relatively low inventories and rising gasoline demand (and) margins also temporarily widened because of outages on the Colonial Pipeline,” the EIA reported.

Colonial Pipeline was forced to temporarily shut down their operations last month following a disruptive cyberattack. The company operates the largest U.S. fuel pipeline and has since returned the system to normal operations.

“That affected (costs) a little bit,” Suprenant says. “We get most of our gas from the New York harbor and the harbor is fed by the Colonial Pipeline. A lot of people did a lot of panic buying, so obviously the demand spiked up a bit and so did costs to us coming out of the harbor. But we’re past that now. Everyone has enough supply I think.”

During the first week of June from 2015-2019, gas prices have typically averaged $2.81 per gallon. Last year, amid a pandemic, the national average of gas prices in early June inched up to just above $2 per gallon, the lowest they had been in a decade-and-a-half, according to AAA.

“In April 2020 when COVID hit, crude went negative for a little while and was the lowest that I think I’ve ever seen crude. The cost of gas went down with it, so that’s why we were able to see under $2 gas,” Suprenant says.

The EIA added that they expected higher-than $3 per gallon gas costs in June before falling to $2.76/gal by September – the drop based on rising refinery utilization.

“We’re certainly seeing demand increase as COVID restrictions are lifted and more people are traveling or going back to work,” Suprenant says. “I would expect prices to increase a little bit as they typically do all the way through Labor Day.”

Prices typically start rising around Memorial Weekend and through the summer.

“Besides the supply and demand, with EPA regulations we also have to bring in a different grade of gas,  which we call ‘summer blend.’ You can’t mix as much butane in it, because when butane gets above 70 degrees it burns quicker into the atmosphere, so the EPA restricts what you can and can’t sell and you have to add more expensive additives,” Suprenant says. “That typically happens right around the middle of May. It’s been going on for years and it’s why you’ll y see an .08-to-.12-cent bump through May that people correlate with Memorial Day. Typically as you cycle past Labor Day and late September, you can go back to having butane in your fuel because it’s colder (outside), and butane is a little cheaper additive compared to the alternative.”

The AAA Gas Prices website is updated daily by Oil Price Information Service (OPIS) with average national, state and local prices for gasoline, diesel and E-85. For that daily information, go to: gasprices.aaa.com.