SARATOGA SPRINGS — Among all 62 New York counties, Saratoga saw the fifth largest percent increase in county population from 2010 to 2020, according to a new report from the U.S. Census Bureau. The increase of nearly 16,000 residents shows 7.2% growth over that 10-year-span.

“You look at the numbers and clearly Saratoga County stands out from just about everyone else in terms of our steady, consistent growth – not just in the last 10 years, but in the last 50 years,” said Todd Shimkus, president at Saratoga Chamber of Commerce.

“The numbers I’ve seen suggest that people are coming from all around the world,” Shimkus said. “We’ve had a tremendous boost over the last 10 years from GlobalFoundries, manufacturing and health care have also helped immensely.” Telecommuting is also playing a role, he added. “The ability to work in one place for an employer in another. I think part of our population growth has been people who love the quality of life here and have employers that will let them work from anywhere.”

On Aug. 12, the U.S. Census Bureau released its redistricting data which states may now use in redrawing congressional, legislative, and local district boundaries. Initial data detailed changes in the size and distribution of the population across the United States from 2010 to 2020.

Overall, the U.S. counts a population of about 331.4 million people – 7.4% increase in 2020 over 2010. That is, however, the slowest population growth nationally in several decades.

“Many counties within metro areas saw growth, especially those in the south and west. However, as we’ve been seeing in our annual population estimates, our nation is growing slower than it used to,” Marc Perry, a senior demographer at the Census Bureau, said in a statement that accompanied the data release. “This decline is evident at the local level where around 52% of the counties in the United States saw their 2020 Census populations decrease from their 2010 Census populations.”

Since the first Census Redistricting Data Program, conducted as part of the 1980 census, the U.S. Census Bureau has included summaries for the major race groups specified by the Statistical Programs and Standards Office of the U.S. Office of Management and Budget. Originally, the tabulation groups included White, Black, American Indian/Alaska Native, and Asian/Pacific Islander, plus “some other race.” These race data were also cross-tabulated by Hispanic/Non-Hispanic origin.

The U.S. Census Bureau report data details changes in population at the national, state and county levels. Additional information via the Bureau will be forthcoming.

The Empire Center for Public Policy, Inc. - an independent, non-partisan, non-profit think tank based in Albany – calculated population figures for towns, cities and villages. Those calculations follow below.

There are 19 towns and 2 cities in Saratoga County. These municipalities are represented at the county level by 23 Supervisors – one Supervisor representing each town and city, with the exception of Clifton Park and Saratoga Springs – the two largest populated locations and represented by two supervisors each.  The towns of Ballston, Halfmoon, Malta, and Moreau each show double-digit percent increases in population over the past decade. Conversely, the Saratoga County towns of Day, Hadley, and Waterford show the largest percent decreases, according to the data.

Data and graphs compiled for this piece provided by The United States Census Bureau, and from The Empire Center for Public Policy, Inc. 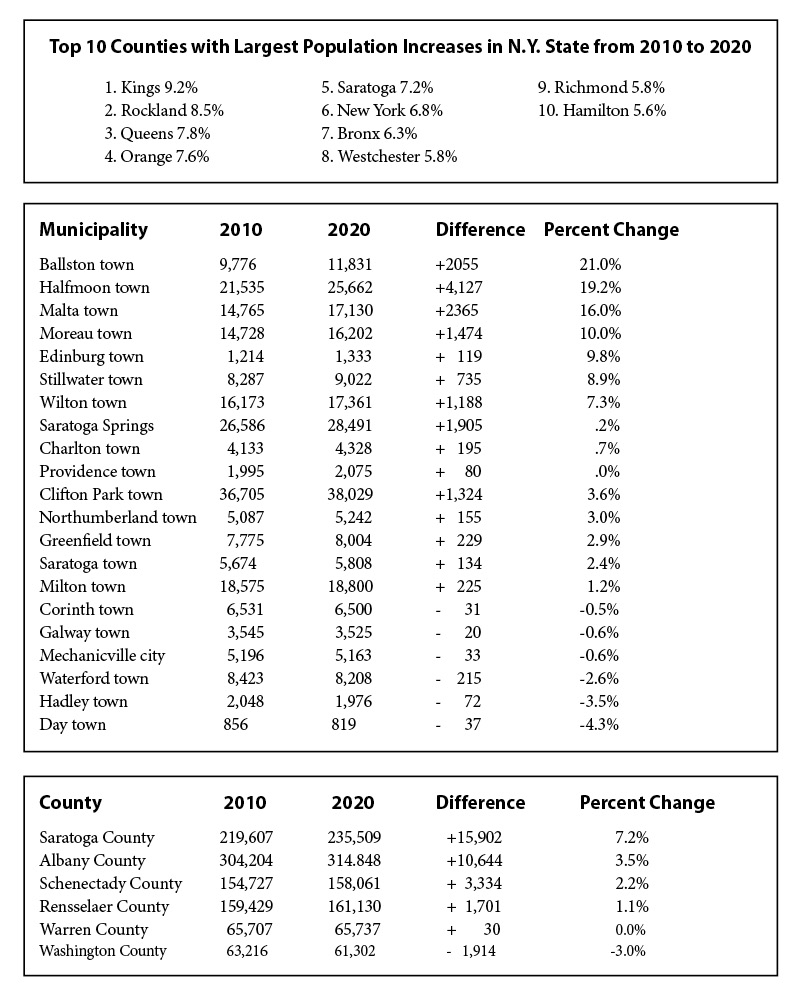