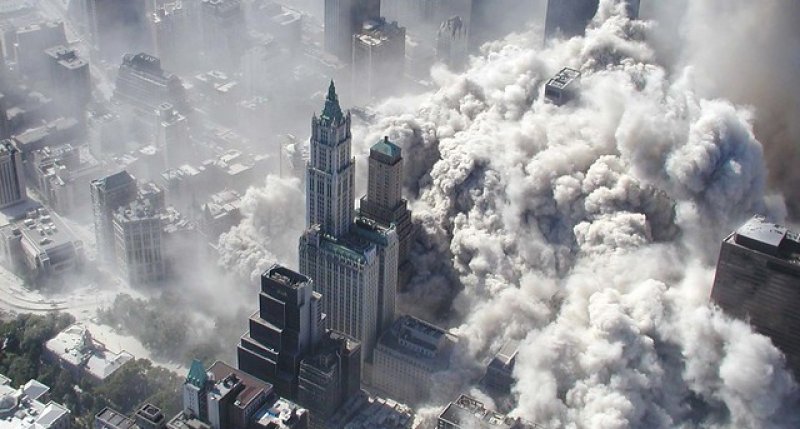 "God bless our first responders and fellow Americans that we lost on September 11th. We honor their memories and forever hold them in our hearts.” – Senator Daphne Jordan

"I remember being at our office on Broadway and going to get a TV so that we could watch the news. As I was walking past Professor Moriartys I could see people standing at the bar looking up at the news and overhearing them say a plane had hit the Pentagon. It was such an overwhelming sense of fear, sadness  and helplessness. It was the perfect day until it wasn't.” - Kate Deloria

"There was a Red Cross blood drive at Empire State College on Union Avenue, and as news spread cars pulled over and came in to donate blood. It was very moving." -Debra Park

8:19 a.m.
Flight attendants aboard Flight 11 alert ground personnel that the plane has been hijacked.

8:46 a.m.
Hijackers aboard American Airlines Flight 11 crash the plane into floors 93-99 of the North Tower of the World Trade Center, killing everyone on board and hundreds inside the building.

9:03 a.m.
Hijackers crash United Airlines Flight 175 into floors 75-85 of the WTC’s South Tower, killing everyone on board and hundreds inside the building.

9:08 a.m.
The FAA bans all takeoffs of flights going to New York City or through the airspace around the city.

9:24 a.m.
The FAA notified NEADS (Northeast Air Defense Sector) of the suspected hijacking of Flight 77 after passengers and crew alert family members on the ground.

9:37 a.m.
Hijackers aboard Flight 77 crash the plane into the western façade of the Pentagon in Washington, D.C., killing 59 aboard the plane and 125 military and civilian personnel inside the building.

9:42 a.m.
For the first time in history, the FAA grounds all flights over or bound for the continental United States.

9:59 a.m.
The South Tower of the World Trade Center collapses.

10:07 a.m.
After passengers and crew members aboard the hijacked Flight 93 contact friends and family and learn about the attacks in New York and Washington, they mount an attempt to retake the plane. In response, hijackers deliberately crash the plane into a field in Somerset County, Pennsylvania, killing all 40 passengers and crew aboard.

More in this category: « City Police Make Multiple Arrests in Connection with Saratoga Springs July Protests A First Responder »
back to top