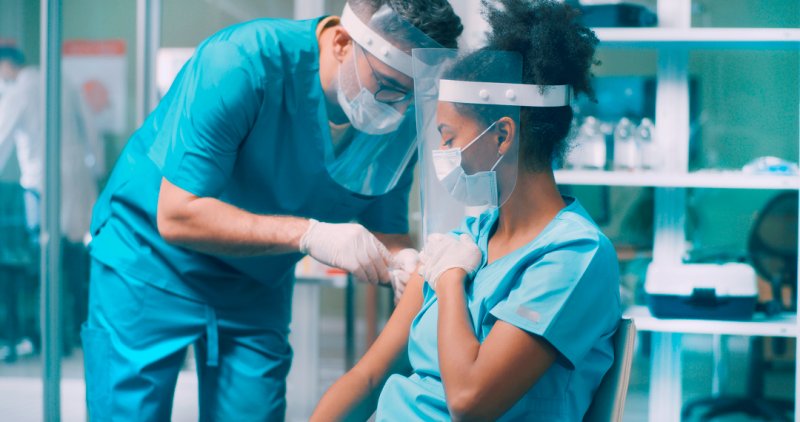 SARATOGA SPRINGS — A first wave of vaccine mandates for health care workers landed in New York this week. Saratoga Hospital reported a higher percent of vaccinated employees than most other hospitals across the state, yet still stands to lose dozens of employees.

“We have about 3,100 staff members across our institution. We had about 150 staff who did not want to get vaccinated, for various reasons, and about half of that number received medical or religious exemption,” said Saratoga Hospital President and CEO Angelo Calbone. “We also have a number of employees who are on medical leave – nothing related to COVID or the vaccine. At the end of this process, it looks like we’re going to lose about 60 staff members who departed the organization due to the
vaccine mandate.”

Some of those 60 employees have chosen to leave the organization, while others who have not met the vaccine requirement are being placed on unpaid leave for a 90-day period, after which their status will be re-evaluated.

Statewide, there are just over 519,000 total staff in hospitals, and 347,217 direct care/patient-facing staff. Health care workers at hospitals and nursing homes were required to be vaccinated against COVID-19 with a first dose received by this past Monday, Sept. 27.

As of this week, 92.3% of all staff and 93.3% of direct care staff have received at least one dose, with an average of 87% of hospital workers having completed the vaccine series, according to the state Department of Health. The latter numbers are up from 77% of hospital workers being fully vaccinated on Aug. 24, shortly after then-Gov. Andrew Cuomo announced the Sept. 27 mandate.

A Shortage of Workers

Facilities across the country have been warning about a shortage of health care workers.

“Health care by nature, in my opinion, really draws a wonderful group of people. Our staff have been doing amazing work and taking care of our community, but they’re getting tired,” Calbone said.

“We’re in the midst of the worse staffing crisis I’ve experienced in my nearly 40-year career. I’ve never seen anything like it. We have staffing shortages across every category, and it is putting great pressure on the health care industry. You can talk to any hospital in the region, and they will tell you the same thing. At the same time, we’re seeing an unprecedented volume of patients. They’re doing great work, but I am worried about them, they’re getting tired,” Calbone said, adding that the hospital actively contacted past employees who might be interested in returning, asked volunteers to step back in, and re-allocated management staff with clinical skills back into clinical roles. “We’re trying just about anything that makes sense and can help out our staff. And we’re looking for anything the state can do to help out.”

Addressing possible staffing shortages across the state, Gov. Kathy Hochul this week announced a plan that includes potentially signing an executive order to declare a state of emergency that allows qualified health care professionals licensed in other states or countries, recent graduates, retired and formerly practicing health care professionals to practice in New York State. Another possible option is the deployment of medically trained National Guard members, as well as exploring ways to expedite visa requests for medical professionals.

A handful of lawsuits have been filed in N.Y. challenging the mandate. Some are based on First Amendment rights to practice religion, others seeking potential exemptions for things such as natural immunity, said Leslie Silva, partner at Tully Rinckey attorney law firm in Albany.

From the employer’s perspective, Silva said, “if there is no valid exemption, you haven’t been vaccinated and it is a requirement of your job – especially as a health care worker – your employer can fire you and that’s it. No compensation. As far as unpaid leave, you’re not collecting anything there either. What you’re getting is a promise that your job will be there.” Saratoga Hospital has chosen the latter route.

In addition to the active mandate calling on healthcare workers in hospitals and nursing homes to receive the COVID-19 vaccine, healthcare employees who work in adult care, home care, and hospice facilities have until Oct. 7 to receive their first shot.

Calbone said what has been most surprising since the start of the pandemic is an unwillingness by some people to accept the reality of COVID-19.

“Accepting the seriousness of the reality of this disease, related to masking, and then as the vaccine has rolled out, the resistance to the vaccine. Quite honestly a year ago we all assumed when the vaccine was available people would celebrate and universally step forward to get the vaccine,” he said. “I’ve been disappointed and surprised, but it’s the reality we’re in and we’re working hard to take care of people as they need to be taken care of.”