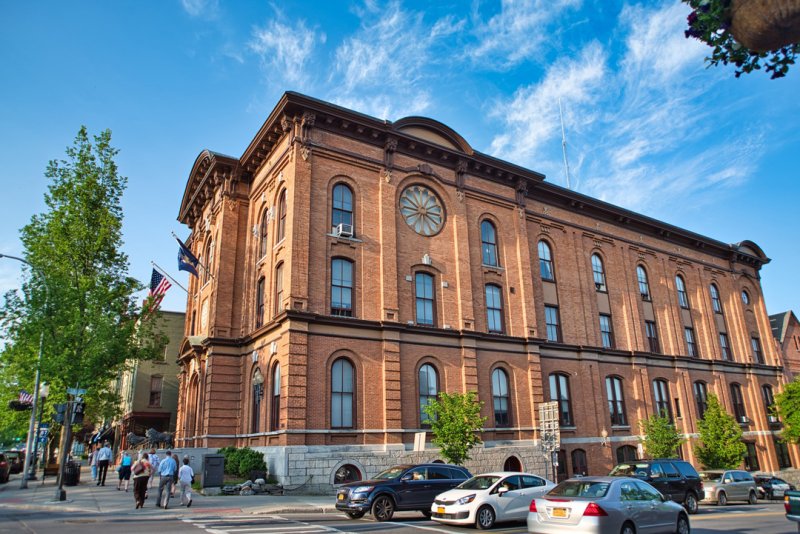 The handsome three-story Italianate building located at the corner of Broadway and Lake Street must have been quite the sight to see when it was completed 150 years ago. On December 28, 1871, a grand reception was held to celebrate the completion of Town Hall, today known as City Hall.

At 3 p.m. the doors were thrown open to throngs of citizens who came to see the new brick building with a large bell tower.  Village commissioners were there to welcome everyone to the building, ushering the public into the grand two-story theater with its large stage, balconies, and crystal chandeliers.  “In the evening the entire building was lighted, from basement to the roof, presenting a beautiful appearance,” The Saratogian reported the following day.

The Town of Saratoga Springs was set apart from the Town of Saratoga in 1819.  Six years later, it was incorporated as a village.  Prior to the construction of Town Hall, town and village boards met separately in a variety of hotels or rented spaces.  The construction of a town hall was first proposed in the early 1860s.  After bonds were secured to finance the project, construction began in the fall of 1870.  The building designed by Cummings & Birt, architects from Troy, and built by local builder, D. M. Main was nearly complete in August 1871, when it became apparent that the cost of the clock and bell were not included in the original estimate.  An additional $2,800 was authorized, which included funds for curtains for the theater and to pave adjacent sidewalks. Upon completion, two lions were placed at the entrance of the building. The total cost of construction was $109,999.46.

The building’s elaborate design and prominent downtown corner location made Town Hall a symbol of power.   Designed in the most popular architectural style at the time, Italianate, Town Hall features a stone base, decorative brickwork, segmental arches, an elaborate cornice with brackets, arched windows with keystones above, fleur-de-lis accents, and the often overlooked large rose window on the south façade. The building was 78’ tall with an additional 60’ tower. The bell tower was louvered with a decorative slate mansard roof with round windows. The clock that measured six feet in diameter was supposed to be placed in the round windows, but due to its delayed arrival it was placed on top.  One year after Town Hall was complete, the commissioners determined that the 3,225-pound Meneely bell was too small, and a larger bell was needed.

Town Hall not only had offices for government officials and a theater, it also had meeting rooms, a courtroom, the post office, police headquarters, including six jail cells, and private offices for rent, predominantly by law firms. The 1,700-seat theater was used for town meetings, theatrical productions, and other public gatherings, such as conventions.  It is in this space that the American Bar Association and the American Bankers Association were founded in 1875.  In 1882, an extension was made to the back of the building to provide additional space for a court room, offices, and the police.

The building remained largely the same until 1934 when significant changes were made.  On December 30, 1933, The Saratogian reported that work to dismantle the theater immediately began following City Council approval to remodel City Hall.  It reported “Under the direction of foreman James J. Riley, a force armed with pinchbars, hammers, crowbars, and other tools, descended on city hall.  By noon all of the seats in the balcony around the three sides of the auditorium had been demolished, the front of the balcony on the three sides lay in pieces, and the front of the stage had been taken away…”  People lamented the loss of the two-story theater where French actress Sarah Bernhardt and actor, singer Chauncey Olcott once performed; high school plays were produced; and many conventions took place.  The theater was replaced with much needed offices and a new courtroom.  A smaller Music Hall was constructed on the third floor.

The remodel was carried out as part of the Civil Works Administration, a short-lived job creation program established by the New Deal during the Great Depression.  On November 8, 1933, Franklin D. Roosevelt unveiled the program in an effort to provide mainly manual labor jobs to the millions of people unemployed.

In 1934, the massive clock on top of the tower that had told time to Saratogians since 1872 was dismantled and seven of the eight chimneys were removed.   Also, the 7’ tall, 10’ wide bell that weighed 5,225 pounds, said to be the largest municipal bell in the northeast United States, was removed from the tower because it was deemed unsafe.   The structure was only designed to accommodate the much smaller original bell.  Two years after the bell and clock were removed, the tower was dismantled.

By the end of 1936, the front doors were replaced with a revolving door; the ornate interior wood stair balustrades were removed and replaced with an aluminum finished metal; the two female statues carrying torches, originally gas and later electric bulbs, that graced the newel posts were removed; and the lions that flanked the entrance were relocated to the east and west recreation fields.  The lions were restored to their original location in 2009 when Commissioner of Public Works Anthony “Skip” Scirocco replaced the inappropriate aluminum front doors with wood doors and installed heated granite steps.

Over time other changes were made to City Hall, including one of the most significant changes - the yellow paint was removed from the exterior, giving the building its natural brick appearance that you see today.

On August 17, 2018, lightning struck City Hall, starting a fire in the attic.  Thankfully the Saratoga Springs Fire Department quickly responded and extinguished the fire.  However, the Music Hall and the south side of the building sustained extensive water damage.

After a thorough assessment of not only the damage to the building, but the building’s infrastructure, the City Council determined that rather than only addressing the damage caused by the fire, the entire building should be rehabilitated.  “The preliminary plan that I presented sought to remove hazardous materials, specifically asbestos; restore historically significant building features; update building systems – electrical, plumbing, data, security, and heating and cooling; improve departmental spaces; and add a second courtroom as mandated by New York State,” said Commissioner Scirocco.

In addition to addressing these items, working with the architectural and engineering firm, Clark Patterson Lee, the plan was expanded to add a second elevator to improve ADA accessibility throughout the building, reconstruct the Music Hall with enhanced acoustical isolation and state of the art audio visual and lighting systems for events, restore the main entrance hall, improve lighting, and uncover historic decorative features.  The Department of Public Works sought input from all the various stakeholders, including City Council, staff, police, and those associated with city court.  Being a designated Local Landmark, input was also sought from the Saratoga Springs Preservation Foundation as well as the Design Review Commission issued an advisory opinion.

The extensive project was completed within two years of the lighting strike, thanks in part to Michael Veitch, Business Manager for the Department of Public Works who served as the Project Manager.  “Our biggest challenge was that with any other project of this magnitude there would have been a year or two of advance planning, but we did not have that.  We had to start immediately,” said Veitch.

One instantly notices the improvements made to the building.  Unattractive ac units no longer hang out the windows of the handsome façade and upon walking in the front doors, it is a much more welcoming experience.  The 1934 Art Deco appearance of the hall is retained, but with enhanced lighting. Where possible, dropped ceilings were removed to reveal decorative tin ceilings and windows.   When a large map of the city believed to date to the early 1900s was discovered behind sheetrock, Commissioner Scirocco insisted that it remain in place.  “It was the attention to detail, especially in the public spaces, that was most important to me,” said Commissioner Scirocco.

Unfortunately, the completion of the project took place during COVID, so it was not possible to host a reception similar to the one that was held on December 28, 1871.  However, there is no doubt that if it had been possible, people would be just as impressed as the day the building opened 150 years ago!