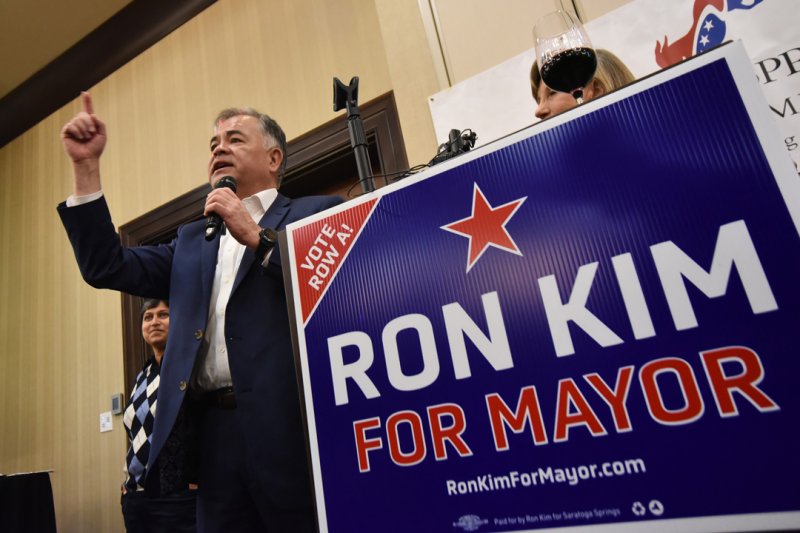 Ron Kim, who will be Saratoga Springs’ new mayor in 2022, making his victory speech on Election Night, Nov. 2, 2021 at the Embassy Suites in Saratoga Springs. Minita Sanghvi, who won the city Commissioner of Finance seat looks on, at Kim’s right. Photo by SuperSource Media.

Current Supervisors Tara Gaston (D) and Matt Veitch (R,C) were re-elected to represent the city at the Saratoga County Board of Supervisors. The five City Council members and both Supervisors will each serve a term of two years.

“It really does take a village to do this,” said newly elected city mayor Ron Kim, during his acceptance speech at the Embassy Suites by Hilton ballroom on Congress Street, where Democrats celebrated their respective victories Tuesday night. Kim previously served as the city’s Commissioner of Public Safety from 2005 to 2009.

Kim thanked his campaign team, former city Mayor Joanne Yepsen, members of his family who were in attendance, and acknowledged the efforts of mayoral candidate opponents Heidi West, and Robin Dalton.

“It is very difficult, particularly in this day and age to run for office and I tip my hat to both of them. I think they made a great effort and I hope to work with them in the future on some of these projects because we need a broad coalition to get some of these things done,“ Kim said.

West is a political newcomer who ran on the Republican and Conservative lines. Dalton is the city’s outgoing Public Safety Commissioner who ran her 2021 campaign on the independent Saratoga Stronger Together ballot line, after leaving the Republican Party over what she called a discomfort with Donald Trump’s presidency and where it was leading the party.

“My goal was to prevent a Republican victory,” she said late Tuesday as vote results were being tallied. “That goal was achieved tonight.” Unofficial Board of Election results indicated Kim bested West 4,029 to 3,767 - a difference of 262 votes. Dalton secured 553 votes.

Kim said among his priorities when taking office as mayor would be locally addressing a national infrastructure investment plan that would provide funding for roads, bridges and major projects, currently being bandied about by elected officials in Washington.

“I think the most important thing, because of timing, is to spend some time asking the residents about our infrastructure needs. I’ve talked to Congressman (Paul) Tonko about this – and if this bill passes, we’re going to need to move pretty quickly to get our place at the table,” Kim said.

“Some (input) will come from City Hall personnel, but it also should come from the residents. They should be part of that. We need to move fast because that money will not be there forever, and Saratoga Springs needs to get their fair share,” he said.  Asked if he can identify any infrastructure needs right now, Kim described issues he’s heard from some residents while campaigning door-to-door – water drainage issues to the maintenance of sidewalks, among them. Another priority would be moving forward with the East Side Fire Station project slated to be sited on Henning Road, Kim added.

Members of the Republican Party staged their Election Night gathering at The Holiday Inn on Broadway, and candidates of the Saratoga Stronger Together ballot line held their gathering at The Inn at Saratoga.