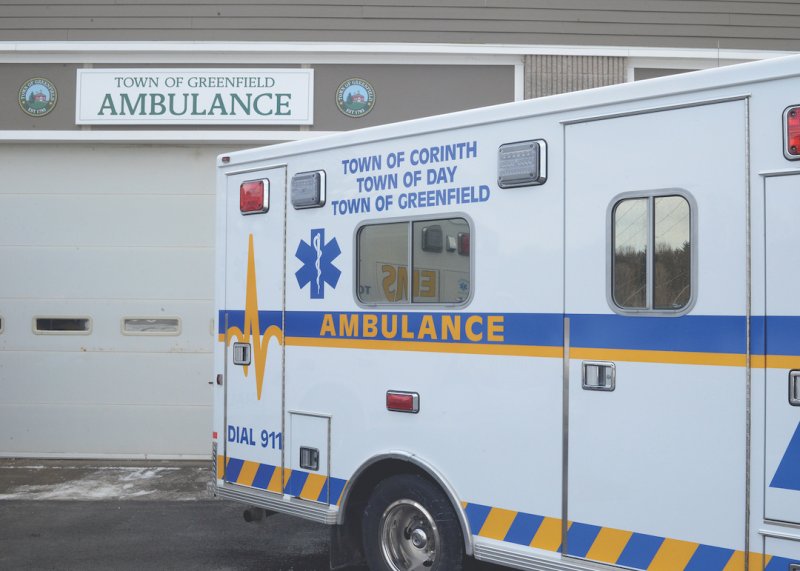 GREENFIELD — Timing is everything. Housing a population of more than 8,000 residents and siting within its borders the Maple Avenue Middle School – with its 1,400 students, and Prestwick Chase – a 55+ senior independent living community, the town of Greenfield this week opened the doors of a locally-based ambulance facility which will offer 24-hour, seven-days-a-week emergency services.

“We’ve reached a point of growth where it’s time to have something like this in our hometown,” explained Town Supervisor Kevin Veitch. An official ribbon-cutting ceremony was staged Jan. 27.

The new facility is located in a renovated garage that once housed the town’s fire department. It stands across the street from the current Greenfield Fire Department, on South Greenfield Road. Greenfield Ambulance will occupy approximately 1,500 square feet of the building, including a garage bay, a secured storage room for medical supplies, and living and sleeping quarters with a full bathroom and kitchenette.

Through a shared services partnership with the Town of Corinth EMS, the facility will house a full-time emergency medical technician and paramedic, as well as an ambulance and first response vehicle.

“It will be staffed 24 hours a day, 7 days a week,” said Veitch, who was among those on a committee formed to study the services previously delivered – Greenfield had contracted with as many as three different area EMS units in the past - and to explore future options.

“What we learned was that if we were able to have it be more centralized within our town, it would give us better response times. That seemed to be the biggest concern. Having the Middle School and so many kids at one location especially, if something were to happen, you can never get there fast enough,” Veitch said. “By bringing it into the center of town and being able to dispatch an ambulance from that new location, as opposed to dispatching from the center of Corinth, it would shorten that time quite a bit. It makes quite a bit of difference.”

Veitch estimated the former trip would normally take 12 to 13 minutes. “The new location: we’re hoping to get that down to single digits.” In addition to the ambulance, there may also be a “speed vehicle” occasionally utilized, which would get to the scene of the incident in more rapid fashion and potentially work to stabilize the person in distress. The amount of minutes it takes an ambulance to respond to critical calls is essential.

Former town Supervisor Daniel Pemrick is credited with leading the effort in a municipal partnership with the town of Corinth, which was key for providing the infrastructure necessary for Greenfield to launch its town service. “Corinth EMS is the ideal partner to bring better emergency services to our town. They are a well-established, first-rate operation that will help us bring our residents the kind of fast, quality care we need,” Pemrick said.

The town of Greenfield had approximately 600 emergency calls last year, according to Corinth Director of EMS Matt Fogarty. Fogarty will additionally serve as Director of Greenfield Ambulance and will staff the new service with his 36 current employees. The new centralized service is expected to reduce response times for the town’s entire 68-square mile area. Greenfield counts a population that has grown to more than 8,000 residents, according to the U.S. Census Bureau. Geographically, it is the largest town in Saratoga County. It shares its southern border with Saratoga Springs and Milton, and is otherwise bounded by the towns of Wilton, Providence and Corinth.

Previous ambulance expenses were approximately $210,000 annually and the amount budgeted for 2022 is $475,000, Veitch said. The town’s annual general fund is $2.7 million and its Highway fund is $3 million, for a combined total of $5.7 million, he added.

“Right now, we’re budgeting it right out of our own budget. We have the funds to do it,” Veitch said. “This will give us an opportunity to see if this is the best way it works, without making a major commitment. We didn’t have to build the building, we didn’t have to buy the equipment, or hire the staff. We’re giving it a three-year window to assess. We’re looking forward to seeing this improve and help in the arrival time. We think it will be a good thing for our citizens.”

Correction: an earlier version of the story referring to the Maple Avenue Middle School misidentified the name of the school. It has been corrected in online editions.