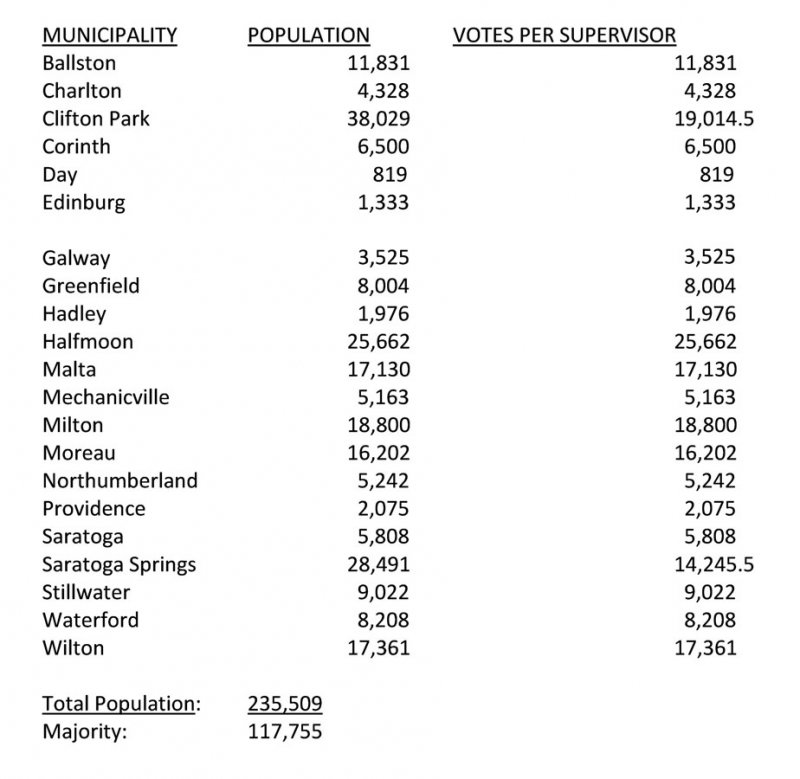 BALLSTON SPA — Among all 62 New York counties, Saratoga saw the fifth largest percent increase in county population from 2010 to 2020. The increase of nearly 16,000 residents shows 7.2% growth over that 10-year-span.

In response to that population growth, County Administration this week requested consideration of a revision of the weighted vote counts on the Board of Supervisors.

The town of Clifton Park – with 38,029 residents, and the city of Saratoga Springs – with 28,491 residents, are the most populous municipalities in the county. Each has two supervisors equally splitting the vote of their respective communities. All other municipalities each have one supervisor.

The town of Halfmoon, topping the 25,000 mark, is the third most populous community and would have triggered the need for a second supervisor as per previous rules. However, on Feb. 15 the Board of Supervisors voted to increase the population threshold that would trigger a second supervisor to 27,500.

In other items presented by the county’s Law & Finance at its March 9 meeting, a resolution was proposed that would, by full county board approval, authorize $2 million be committed for the sewer extension project to the towns of Wilton and Moreau. In order to connect additional users in the two towns to the sewer infrastructure maintained by Saratoga County Sewer District no. 1, engineering and surveying studies and additional sewer infrastructure are required at an initial projected total cost of $9.3 million.

A full Board of Supervisors meeting, which is held monthly, is scheduled to take place Wednesday, March 16.

More in this category: « X Marks the Spot - Saratoga Couple Set to Open X-Files Establishment Chamber of Commerce Seeking Nominations »
back to top