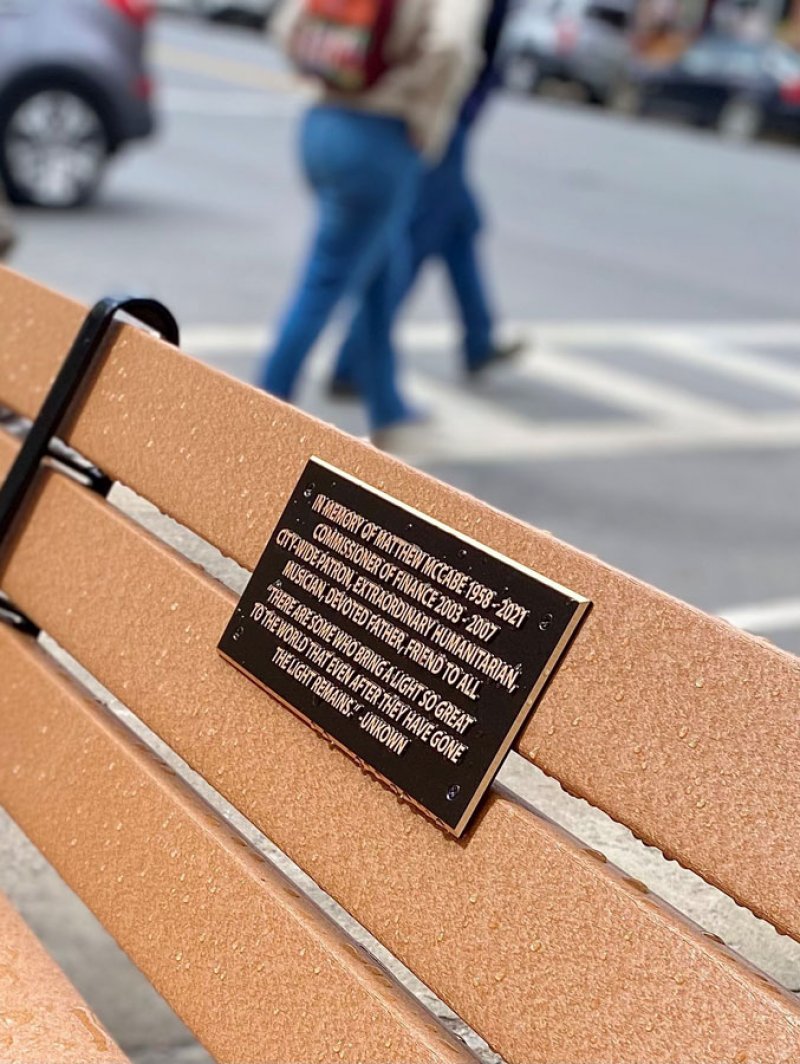 Plaque fixed to a bench honoring the late Matt McCabe was placed on Broadway this week. Photo by Thomas Dimopoulos.

SARATOGA SPRINGS - Beloved local man Matt McCabe ﬁ who for a quarter-century operated a number of Saratoga Guitar shops, hosted The Capital Region Guitar Show, and from 2004 to 2007 served as city Finance Commissioner, was posthumously honored with a plaque fixed to a bench on Broadway bearing his name.

The bench stands at the northeast corner of Broadway and Caroline Street, a few yards from the spot where McCabe opened his first shop - a small 160 square-foot space fitted with 48 used guitars and 10 amplifiers in June 1994.

He would subsequently grow to a bigger space, increase the number of his Saratoga Guitar shops, and expand inventory to include the sale of new, used, and vintage instruments, a plethora of accessories, sheet music, vinyl records, and where he and his staff would conduct instrument repairs. McCabe also became the host of The Capital Region Guitar Show - one of the longest-running guitar shows in the country - in addition to performing his own shows and serving as a two-term city Finance Commissioner. McCabe died from complications of COVID-19 in January 2021.

“Matt McCabe had provided remarkable services to the city as a commissioner of finance as well as his unflagging assistance of city events, the city’s downtown business organizations," outgoing Finance Commissioner Madigan told the City Council in late 2021 while bringing a resolution to the table to commemorate McCabe. A variety of plans were discussed. Ultimately a bench fixed with a plaque bearing McCabe’s name standing on Broadway was decided as the best course of action. Madigan, who served as city finance commissioner from 2012 to 2021, said before she left office that a bench would be placed on Broadway in the spring. This week, that promise became a reality.