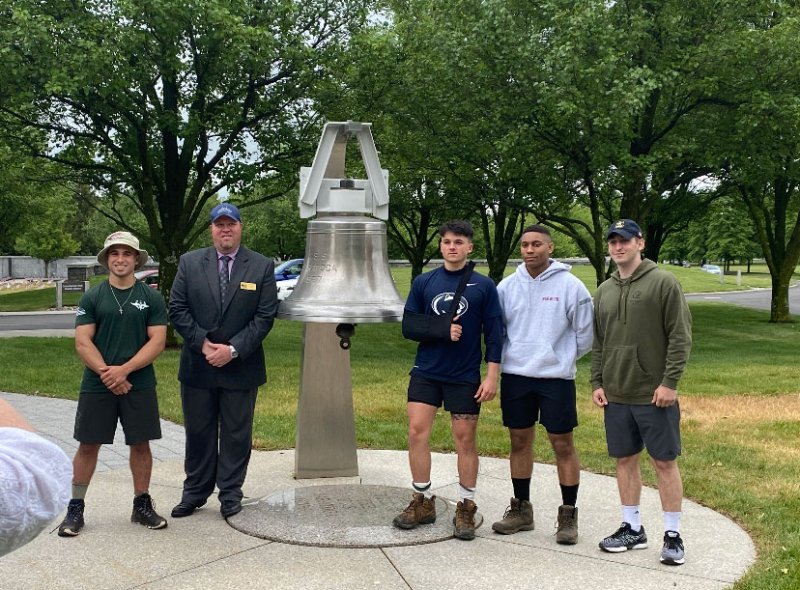 Memorial Day is typically packed with barbeques and family gatherings, a sure sign of the upcoming summer. For a few soldiers from Saratoga Springs, it means a 22 mile ruck (an elongated march with weighted gear) in the name of a fellow fallen soldier, Saratoga Springs graduate Abigail Jenks.

Jenks was only 20 years old when she was killed from a fall during a routine training at Fort Bragg in North Carolina on April 19, 2021. She was the first female in the Capital Region to enlist as a Paratrooper, assigned to the 82nd Airborne Division.

As a way to honor Jenks’ memory and raise funds for a scholarship in her name, Saratoga natives Jack Trimmings, a student at Penn State and member of their ROTC program, and Vincent Sablich, a student at Boston College who was medically discharged from their ROTC program, will be “rucking’’ 22 miles from Wilton to the Gerald H.B Solomon National Cemetery in Schuylerville and finally to the Saratoga Lake public launch on Saratoga Lake this Memorial Day. The “22” miles of their ruck is symbolic of the 22 soldiers and retirees who commit suicide dalily across the county. A ruck is a military training exercise which requires participants to walk, march or run a long distance with weighted gear on a backpack.

“This is our own private way of remembering those who came before us on Memorial Day. It’s important to us to give back,” Trimmings said. Trimmings and Sablich were a year younger than Jenks but grew up near each other and graduated with her brother.

“It’s hard for graduating seniors to enlist in military life. This is just a way for us to help jump start their career,” said Trimmings of the donations made to their scholarship. It is his hope to raise not only funds for future soldiers, but also awareness of issues that soldiers have when they are home such as post-traumatic stress disorder, anxiety, depression and suicidal ideations.

While Trimmings and Sablich did not personally know her in life, they felt they got to know her when they visited her home. Abigail was a talented artist and has over 100 works to show for it. She wanted to become a tattoo artist and has had some of her work tattooed on others. In her mother’s home there is a complete room dedicated to Abigail’s life and artwork. She also loved animals and joined 4-H, raising bunnies and chickens.

“When Abby went to enlist, people thought she was in the wrong place. They had never sworn in a female paratrooper before,” her mother Mary Jenks said. She added that Abigail was very headstrong and was known to urge on her male comrades during training when she was ahead of them.

Trimmings and Sablich have also participated in rucks in 2020 and 2001 for the 22 Warriors Foundation, a non-profit organization which supports families of those have been affected by a military member’s suicide.

Students who have a military career in mind can apply for this scholarship through their guidance counselors at Saratoga Springs High School; however, because of the short notice, it is likely to be honored to a student in the 2023 class. If applications are sent now, there is a chance to receive the scholarship this year. Applicants need to have documentation of their military service plans and a 500 word essay about their intentions to serve in the military. The deadline is June 2. There will also be information on the Saratoga Springs High School website.

Mary Jenks is grateful to the men participating in the ruck, as they are also bringing awareness to Abby’s story and helping out future soldiers who desire to serve their country. Also participating in the ruck is Cameron Lebed, a local ROTC cadet who studies at Rochester Institute of Technology and Charlie Work, a cadet in the ROTC at Boston College.

Mary is also hosting an art exhibition with Abigail’s artwork on June 10 at the Eden Cafe in Albany from 6-10 p.m. There is a $5 donation and admission can be purchased at www.eventbright.com or at the door upon arrival. All proceeds will benefit the Veteran and Community Housing Coalition, which serves homeless veterans in Saratoga County.

To contribute to the Memorial Day ruck and the scholarship in Abigail’s name, please visit gofundme.com and search for the Abigail Jenks Memorial Scholarship