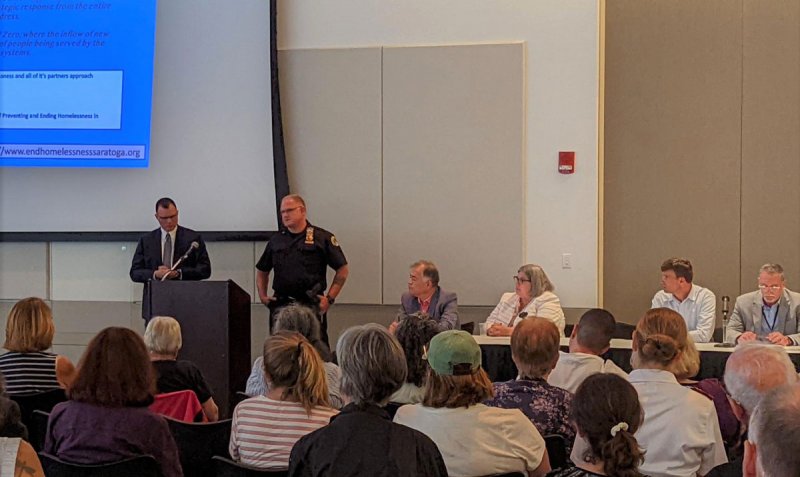 The featured panel included elected officials, members of law enforcement, participating agencies and community partners, each of whom took their turn speaking about homeless issues and answering audience-submitted questions regarding housing, panhandling and homelessness.

The goal of the collaborative effort between agencies and the public showcased what panelists hope is a commitment to ending homelessness in Saratoga County, and addressed everything from housing, policing, addressing mental health and overall medical needs, and support services offered.

Addressing audience questions regarding housing possibilities for the homeless, city Mayor Ron Kim urged members of the public to come to council meetings and voice their respective opinions.

“The City Council has over the past several years dealt with the (housing) issue. We have seen a few proposals from developers. Every time we get a proposal to do low-income or workforce housing – and those are two different levels – the (council room) is filled with people that don’t want it,” said Kim, citing specifically a failed proposal to put low-income housing behind the Price Chopper on Route 50. There have been others.

“I want to emphasize this because people will say that the root of all this is (lack of) housing. You’ll see some proposals as we go along, and we’re very hopeful – but you need to fill the room. Because if there aren’t people who are saying ‘this ought to happen,’ there definitely will be the people who will say ‘it should not,’” the mayor said.  “If you want to see (housing for the homeless) happen, and you don’t want to see the person in the vestibule of your business, the next time you see a proposal in front of the City Council, come before us. You need to say: this is what is good for our city as a community.”

In the days that followed the event, Shelters of Saratoga (SOS) launched a new Homeless Education Campaign which it says is aimed at educating residents and visitors about area poverty and homelessness.

Titled “Give to Make Change,” the campaign will see informational coffee sleeves distributed at more than 50 Saratoga County Stewart’s Shops with how-to-donate instructions that SOS helps raise critical financial support for solution-based services that help end the cycle of homelessness.

“Give to Make Change” will provide an educational component to a donation drop boxes effort initiated in 2016, overseen by the Special Assessment District. The drop boxes encourage people to support Shelters of Saratoga services, rather than providing money directly to people on the streets, and $30,000 has been donated in the drop boxes in their six years of usage.