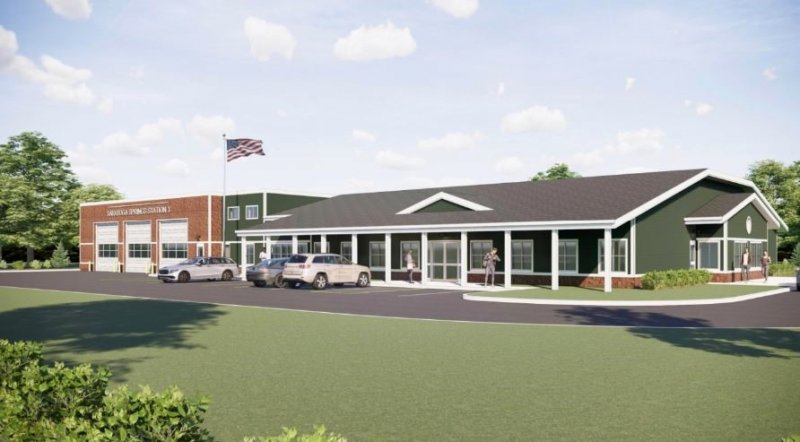 Plans for the proposed Saratoga Springs Fire Station No. 3 submitted to the city in June, 2021

SARATOGA SPRINGS — The City Council this week awarded two bids and authorized the subsequent signing of two contracts totaling more than $5 million that will move the city closer to its long-anticipated third fire station.

“This is a momentous moment for all of us,” Accounts Commissioner Dillon Moran said, while awarding the bids to Bunkoff General Contractors of Latham for up to $4.436 million, and DLC Electric of Troy for up to $638,000. In all, six companies had been vying for the contracting bid, seven for the electrical work.

Saratoga Fire Station No. 3 will be developed at 16 Henning Road, roughly opposite the BOCES campus, and will serve the city’s eastern plateau.  The city’s two other stations are located in close proximity to downtown, and on the west side, respectively.

Plans proposed last summer depicted a one-story building measuring 15,500 square feet with dark green siding with white trim, centered on a 2.4-acre parcel. The plans may since have been slightly modified.

Earlier this month, city Finance Commissioner Minita Sanghvi announced the city of Saratoga Springs sold $17,137,299 Public Improvement Serial Bonds at a Net Interest Cost of 3.90% - the proceeds of which will target several capital projects, a third fire/EMS facility among them. That fire station tops the cost list of 2022 requested, with requests of $6.7 million and $400,000.

“The city chose to postpone financing for the construction of the third fire/EMS station during the pandemic, a fiscally prudent measure given the uncertainty of 2020 and 2021,” Sanghvi said.  “Our city has recovered to the point that we are now moving ahead with financing and construction of this vital city resource.”

More in this category: « Rash of Burglaries Strike Downtown Businesses Saratoga County Sheriff Makes Commitment To Boat Safety Ahead Of Summer Season »
back to top